After the release of Samsung’s foldable smartphones, one could think that the company has completed its plans for the flagship segment in 2021. However, there is still one more device to come – The Samsung Galaxy S21 FE (Fan Edition). Samsung started this Fan Edition last year with the Galaxy S20 FE and the device proved to be a hit. Now, the company is preparing a sequel for this handset and it has been the target of multiple leaks for the past few months. The device was even accidentally leaked by Samsung via one of its social media posts. For now, there is still no word on the device’s launch date, but today the Exynos-variant has been spotted in the Geekbench benchmark.

As per the reports, the Samsung Galaxy S21 FE will be priced slightly below the standard Galaxy S21. The device will pack a similar design language with the only difference in the camera island which will have the same color as the rear panel. The flagship smartphone has visited the Geekbench benchmark with the model number SM-G990E. The variant listed on Geekbench has an Exynos 2100 SoC.

Interestingly, another variant of the Galaxy S21 FE with the model number SM-G990B was spotted on Geekbench with a Snapdragon 888 SoC. As per the rumors, Samsung will launch the Snapdragon 888-powered variant in the European and US market. Other markets are likely getting the Exynos 2100 variant to the anti-Exynos gang distaste. 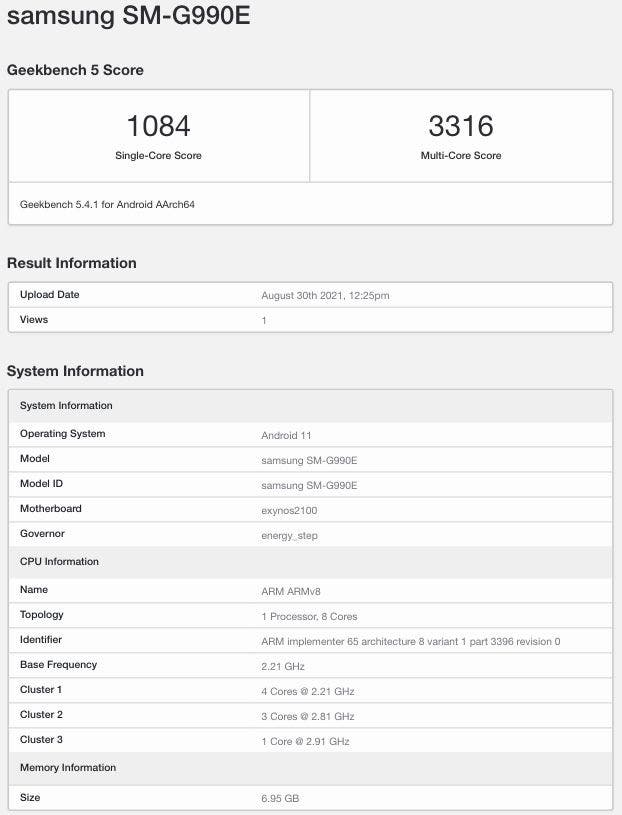 In addition to the Exynos 2100, this variant comes with 8 GB of RAM. Furthermore, it runs Android 11 straight out of the box. That means that the latest One UI 3.1.1 will be running on the top. The processor is clocked at up to 2.91 GHz and scored 1,084 points in the single-core and 3,316 in the multi-core department.

Other details of the smartphone have leaked in the past. Samsung’s upcoming Galaxy FE smartphone will sport a flat 6.4-inch 120 Hz display. This is an AMOLED LTPO display. It allows the refresh rate to switch from 1 Hz to 120 Hz depending on the screen’s content. The panel itself is flat and has a center-aligned punch hole at the top. In terms of cameras, rumors say that the device has a triple-camera setup with a 32 MP main + 12 MP ultrawide and a tertiary 8 MP unit. For selfies and video calls, there is a 12 MP camera.

The device will draw its powers from a 4,370 mAh battery with 25 W fast-chargin support. As we said before, the device will launch with Android 11. However, it is eligible for the upcoming One UI 4.0 and Android 12 update.