In August, a couple of manufacturers released flagship models. The likes of Xiaomi, Motorola, iQOO, and Honor all had their flagship smartphones hit the road in August. These smartphones also kicked-started the wave of new smartphones in the second half of the year. So how did these new smartphones perform in August? Today, Master Lu announced the August operating system fluency list for Android smartphones. The top 10 most fluent OS list includes 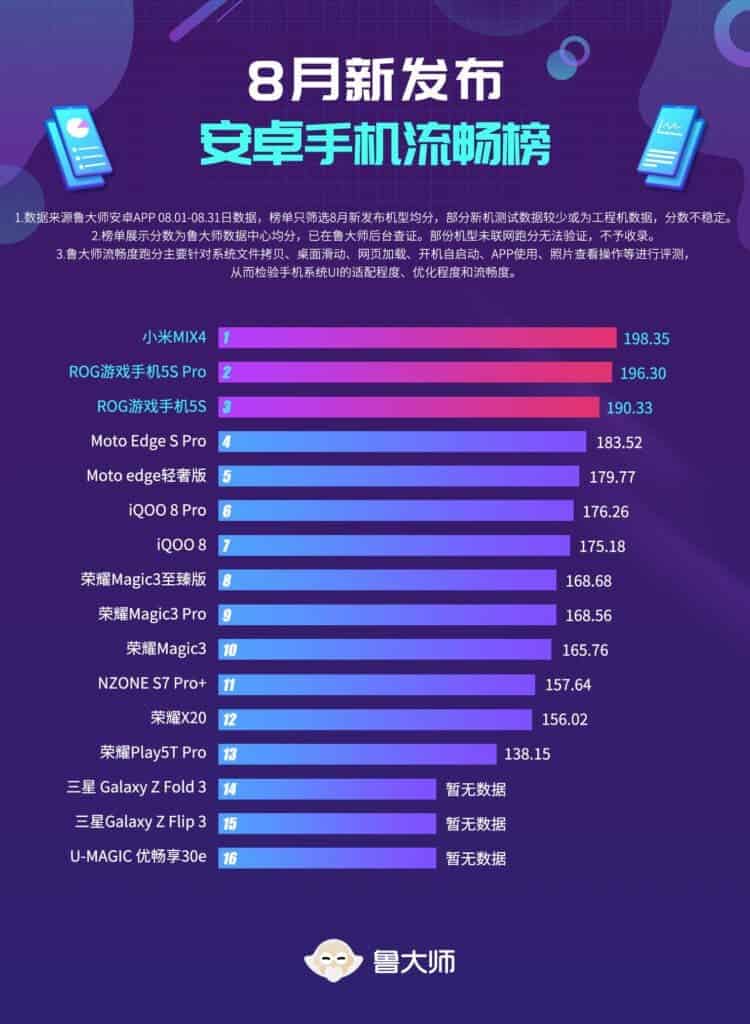 Since the launch of MIUI 12, this system has been a bunch of problems for Xiaomi. The system is plagued with a plethora of issues many of which the company has solved. However, it appears that as it solves one, another appears. Xiaomi had to subsequently release the MIUI 12.5 system which tackles most of the issues. However, many users still believe that the MIUI 12.5 did not live up to expectations. For this reason, the company had to look for a solution.

According to reports, Xiaomi plans to release MIUI 13 next year with the Xiaomi Mi 13. The company probably needs its digital series and Android skin to have the same digits. Nevertheless, the MIUI 12.5 needed an urgent upgrade thus the company unveiled the MIUI 12.5 enhanced version. From the latest ranking, it appears that this new enhanced version has solved all the problems of the MIUI 12.

Although the MIUI 12.5 system is pre-installed on the Xiaomi Mi MIX 4, it can be upgraded to the latest MIUI 12.5 enhanced version. The company claims that this new system is more fluent and the Master Lu ranking confirms this. The Xiaomi Mi MIX 4 has the most fluent OS for the month of August according to Master Lu.

The relatively “unpopular” ROG Phone 5S series has also been significantly improved in UI optimization. The fluency of the smartphone system keeps up with the mainstream rhythm. Of course, there are some improvements that enabled these smartphones to have one of the most fluent OS for this month. The 144Hz high refresh rate Samsung AMOLED gaming screen adds a lot to the fluency.

The Moto Edge S Pro and Edge Light Luxury Edition run on a new stock Android system. We can now understand why these smartphones have one of the most fluent OS for this month. However, Motorola did its own tweaks on this system to make it better. The company had to improve the software experience of this system for daily usage.

These smartphones come with the Moto app and they get regular major and security upgrades. Although this system may not appear as advanced as the competition, its simplicity is also a plus. Furthermore, there is no annoying bloatware on this system which makes it more fluent.

The iQOO 8 and iQOO 8 Pro come with the OriginOS on top of Android 11. This new smartphone software from the company is quite different from its predecessor, Funtouch OS. Since it is quite new on iQOO smartphones, there has been no report on this system. However, with the latest Master Lu ranking, the OriginOS clearly beats the expectation of the industry.

The Honor Magic3 series is the company’s first post-Huawei flagship smartphone. The most interesting part of the software of this device is that it will run Google’s popular software and apps at their full capacity. This means that the Honor Magic3 series will have Google Mobile Services, as well as popular Google apps. Of course, this includes the Google Play Store and Gmail. With these additions, Honor had a major morale booster with its software preparation. Apparently, these smartphones do not just support GMS, the system is also fluent.

Recall that Honor has been an integral part of Huawei’s success. In fact, outside China, Honor had more influence than its parent company, Huawei. One of the reasons why Honor had so much influence was its operating system. After the sales of Honor, the company retained all its team. The only difference is that it is no longer under the control of Huawei. Thus, it is not a surprise that this company is on this list, Its software team is still doing a marvelous job. Of course, Honor is still a step behind the likes of Samsung and Apple. Nevertheless, the company system is doing quite well.

It is important to note that the fluency score of Master Lu is mainly evaluated for system file copy, desktop sliding, web page loading, boot-up, APP use, photo viewing operation, etc. This is in order to test the adaptation, optimization, and fluency of the mobile phone system UI. We have seen the list of the top 10 most fluent smartphones for the month of August. What do you think about this list? Is there any smartphone that you think should be on this list that is not? Let us know your thoughts in the comment section below

Next OnePlus 5 goes through "hell fire" and still works perfectly