Apple‘s fall presentation is less than two weeks away. In addition to the iPhone 13 series, the company should present the Apple Watch Series 7 smartwatch. This time, the smartwatches will change externally and internally, the company is doing everything to ensure that its wearable gadget continues to remain the market leader.

The well-known Bloomberg journalist Mark Gurman announced that Apple Watch Series 7 will grow slightly compared to its predecessors and instead of 40 mm and 44 mm versions, gadgets will be released in 41 mm and 45 mm cases. The display diagonal will also grow – 1.78 inches and 1.9 inches, respectively. The display resolution will be 484×369 pixels.

Apple Watch Series 7 will receive other new features, in particular, it will offer faster processors, new lamination technology, new skins, and the edges of the case itself will become flat to meet a single design code.

Rumor has it that things are not going well with the release of the Apple Watch Series 7 and the company was forced to suspend production. Rumor has it that the complexity in the design did not allow the assemblers to start mass production in time. But this should not affect the timing of the announcement of the smartwatch. They should be presented at the appointed time, but the date for the start of sales may be postponed. 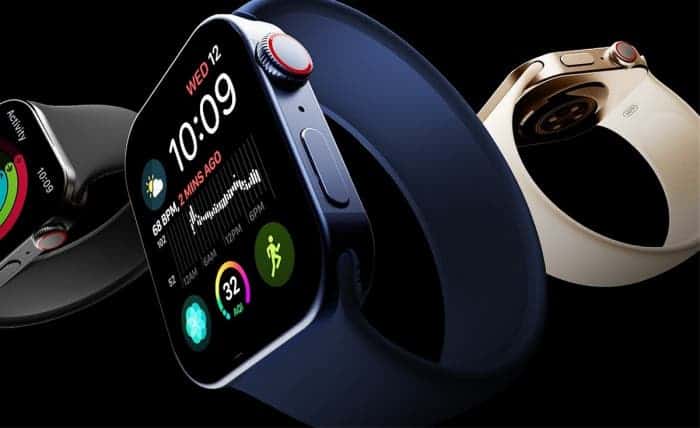 According to Nikkei Asia, citing three knowledgeable sources, Apple had to postpone the launch of mass production of the new generation of Apple Watch smartwatches due to “the complexity of their design”. It is reported that the company is going to present the Apple Watch 7 in September, but so far it cannot provide a high-quality device that is “significantly different” from previous models.

Last week Apple began small-scale production of new watches; but was unable to ensure the proper build quality of the gadget. The problems are related to the increased complexity of the Apple Watch 7 design, in which new modules have appeared. In particular, the device will receive a blood pressure sensor. The arrangement of the internal components in the new watch has also changed. Against the backdrop of the coronavirus pandemic; it has become more difficult to test the new design for performance, Nikkei Asia interlocutors say. At the same time, the body of the device has not changed much compared to previous models.

“Apple and its suppliers are working around the clock trying to solve the problems that have arisen; but it is currently difficult to say when mass production may begin;” added one of the sources in a conversation with the publication.