Micromax In Note 1 Pro is set to make its much-awaited debut in India later this month, according to a noted tipster. The Indian consumer electronics manufacturer has been gearing up to make a comeback in the country since 2020. Micromax was one of the most popular local smartphone brands. However, the company lost its grip in the market after the arrival of low-priced Chinese smartphones that offered sufficiently good specs. In a bid to acquire its position back, Micromax launched the In series back in 2020.

This year, the company introduced another handset dubbed, the Micromax In 2B. Still riding high on the success of its previously launched handsets, the company is now set to launch a new phone with the In Note 1 Pro moniker. The phone’s existence was confirmed by its Geekbench listing last month. The listing divulged some key specifications about the upcoming smartphone. Now, noted leaker Mukul Sharma has predicted that the phone will launch later this month.

[Exclusive] Micromax is indeed coming up with a new smartphone. In all likelihood, it’s going to be the In Note 1 Pro and is set to launch at the end of September.#Micromax #MicromaxInNote1Pro

Sharma claims that Micromax is planning to unveil the In Note 1 Pro in the country by the end of September. Just like other previously launched smartphones under the lineup, the In Note 1 Pro is likely to deliver a clean Android experience, according to 91mobiles. Aside from that, Sharma did not reveal any other information. However, the phone’s Geekbench listing shed light on the phone’s specifications.

The phone carries model number E7748 in the Geekbench listing. This model number is tipped to pack a MediaTek MT6785 SoC, which alludes to the Helio G90 SoC. The Helio G90 SoC features two ARM Cortex-A76 which clocks at up to 2.05 GHz. In addition to that, the processor offers six Cortex-A55 cores that are clocked at up 2.0 GHz. Under the hood, the phone has a Mali-G76 MC4 GPU for carrying out graphics tasks. Regrettably, details about the phone’s screen size, battery capacity, design, and camera configurations are still scarce. 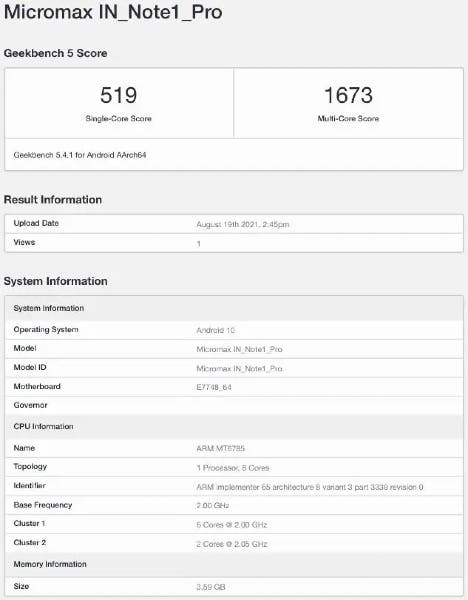 Furthermore, the device scored 519 in the single-core test and 1673 in the multi-core test. This coincides with other mid-range devices in this segment. Aside from that, the phone is likely to run on Android 10 OS, and ship with 4GB of RAM. It is still unclear whether Micromax will roll out Android 11 OS for the In Note 1 Pro when it is finally launched. Also, the phone could adopt a punch-hole design or feature a waterdrop notch. The rear panel is likely to sport a gradient finish.