Heading out into the wilderness or hitting the open road helps you leave behind the daily stresses of work and life. However, when your emergency weather radio battery runs low or your phone is down to a 5% charge, it changes everything. Portable solar panels and solar generators are great to keep you powered when dry camping or during the off-grid excursion. With these, you can easily dip your toes in the solar power waters.

They are also great if you only need to generate electricity via solar energy on occasion. Also, portable solar systems are a great way to complement an existing installation of rooftop panels. They give you a bit of flexibility when it comes to parking in less than ideal solar locations.

Bluetti’s solar panel product line has a shorter history than their power stations: the first one SP120 was released on July 2020 along with the super star AC200 power station. And later in Jan, 2021, they announced the bigger 200-watt SP200 with their first household power center EP500/Pro. Both the SP120 and 200 are widely loved by solar generator users around the world and the SP200’s have been my personal favorite portable solar by far.

But in this fall, Bluetti has updated their solar panel product line with two brand new arrivals – the PV120 and the PV200 along with the brand’s new expandable power stations AC300 and AC200MAX.

Before you buy, let’s take a a closer look at them today and see what’s changed compare to the previous SP solar panels. 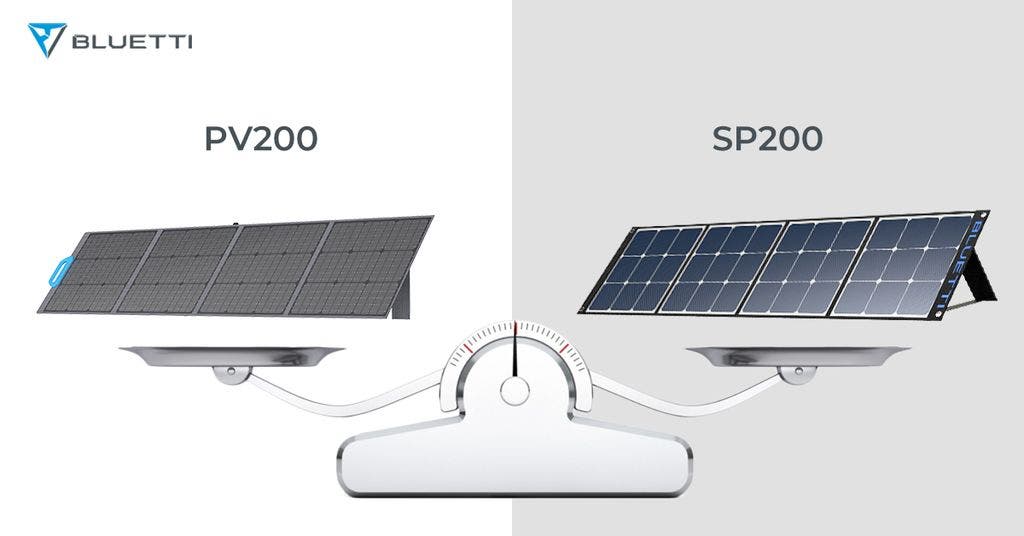 The PV series has an integrated handle made from blue ABS material and a smaller logo on it, adding to the more modish design, while the SP series has black rubber handles and a much more eye-catching “BLUETTI” logo on the end of each panel.

It also features a one-piece waterproof coating design that encapsulates all of the solar cells, while the panels on the SP series are stitched together on one giant raw canvas. 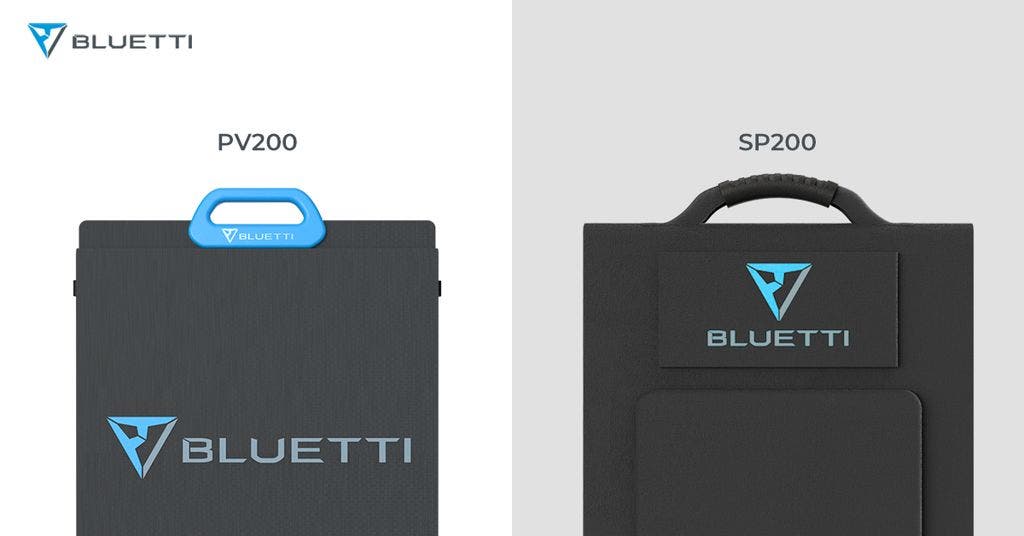 The PV series removed the metal rings (used for hanging up the solar panel with rope or hooks) that can be found on the SP series. 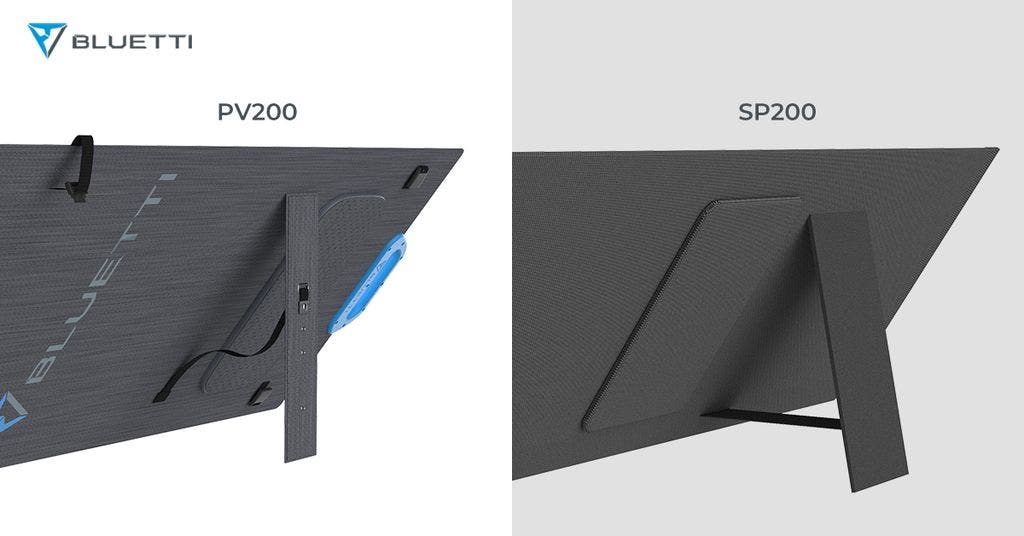 Both the PV and SP series are about the same dimensions. However, the PV solar panels are slightly heavier (by ≈2 pounds) due to the advanced waterproof coating.

Both Bluetti’s PV and SP solar panels are made of monocrystalline, which brings similar overall efficiency around 23%~24%. It’s safe to say that they are all the best portable panels in this industry. 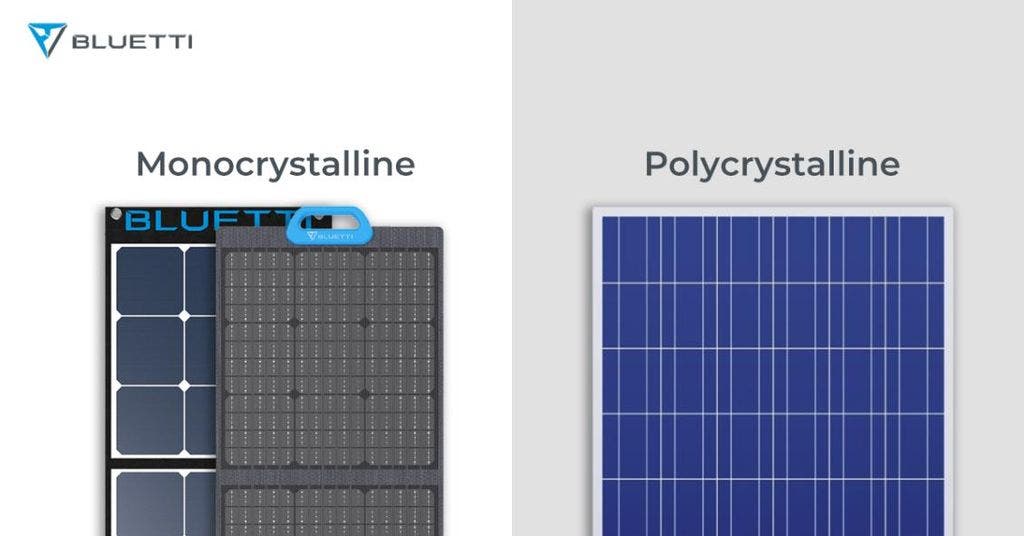 Shade is your enemy when it comes to solar power. Partial shading of the system also matters as all panels in a section need to run at the same voltage; if one panel is shaded even partially, this will bring down the production of the whole system. We’ve also encountered this issue with Bluetti’s SP200 panels, 10% of area shading may cause a shockingly 40% or more power loss to the whole solar array, The same thing can happen with panels from other brands.

And here’s where the most important upgrade happens with Bluetti’s new panels: They changed the connection type of solar battery cells from series connection to parallel! Which means each circuit on the panel can run as an individual and at the same voltage, you will only lost the power of the area with shadows but the impact to your whole system would be nominal.

When solar panels are exposed to shady conditions, their efficiency drops, and their performance suffers as a result. Environmental obstructions such as trees or nearby buildings, clouds, self-shading between panels in parallel rows, dirt, dust, and various other trash such as bird droppings, all cause shading. But now, you can get rid of all these troubles with BLUETTI’s PV200 or PV120.

Next Luxury iPhone 13 series cost well over $40,000 - Most expensive globally