The Realme GT Neo2 arrived in the last week as the fifth device in the Realme GT series. The device is a direct sequel for the Realme GT Neo that was released in March this year with MediaTek Dimensity 1200 SoC. The new variant takes a step beyond the Qualcomm Snapdragon 870, which happens to be slightly faster than the Dimensity 1200. Also, the new handset comes with a larger display and a bigger battery. The 5,000mAh battery is the bigger in the whole GT series. Apparently, Realme fans are enjoying the package of specifications. The device has struck great balance as the units were flying off the shelves. According to the latest reports, the Realme GT Neo2 has sold 100,000 units in a single day. 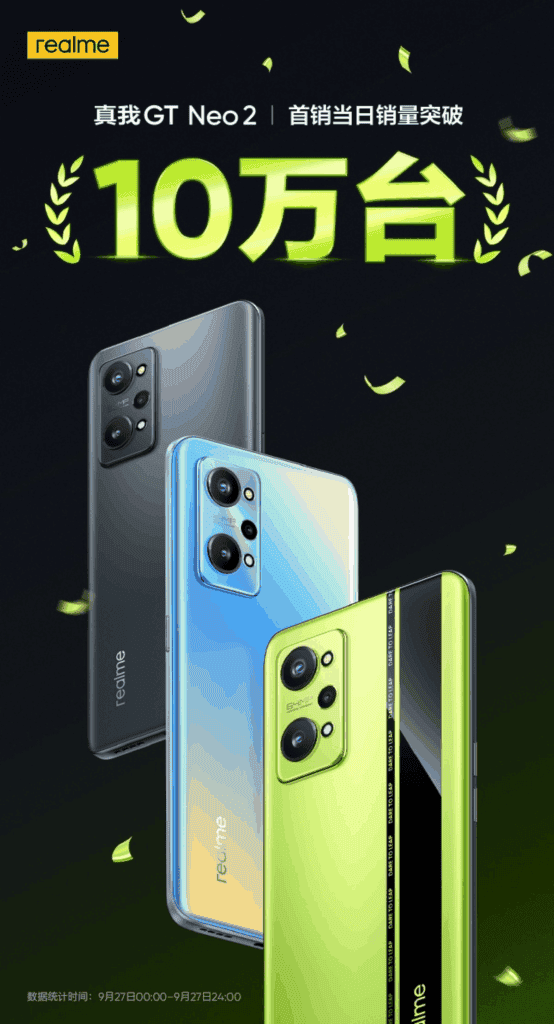 The Chinese brand took it to social media to celebrate selling over 100,000 units in the first day of market availability. Apparently, there is still plenty of units to be sold as the device is still available for purchase today on Realme China’s website. Despite the crisis in the semiconductor industry that delayed smartphone launches, Realme seems to have a good amount of GT Neo2 units to sell in these first days.

In terms of optics, the phone has a triple-camera setup on the back. The primary camera is a 64 MP snapper, and there is also an 8 MP ultrawide module for “groupies”. Finally, we have a 2 MP macro camera. For selfies and video calls, the device packs a 16 MP camera setup. You’ll notice some similarities with other Realme smartphones as this has been pretty much the standard triple camera combo in the GT series.

The Realme GT Neo2 is the GT-series smartphone with the largest battery. The device has a 5,000 mAh battery that charges with the fast 65W charging. The device runs Android 11 straight out of the box with Realme UI 2.0 on top.

So far, the new handset is available only in China. However, the report suggests that it will launch in India in October. We should see a global release shortly after the Indian announcement.