Recently, popular market analyst, Sensor Tower, released the market situation for the third quarter of 2021. According to the company, both stores rake up a total consumption of $34 billion. This is a year-on-year increase of 15.1%. Since the pandemic, consumer spending on the Apple App Store and Google Play Store has been growing. Although it slowed down at some point, it has since started growing again. The growth in the third quarter was mainly driven by the Google Play Store, which increased from $10.2 dollars to $12.1 billion, a year-on-year increase of 18.6%. Despite the Play Store getting a higher year-on-year increase, Apple App Store still beats the Play Store in revenue. 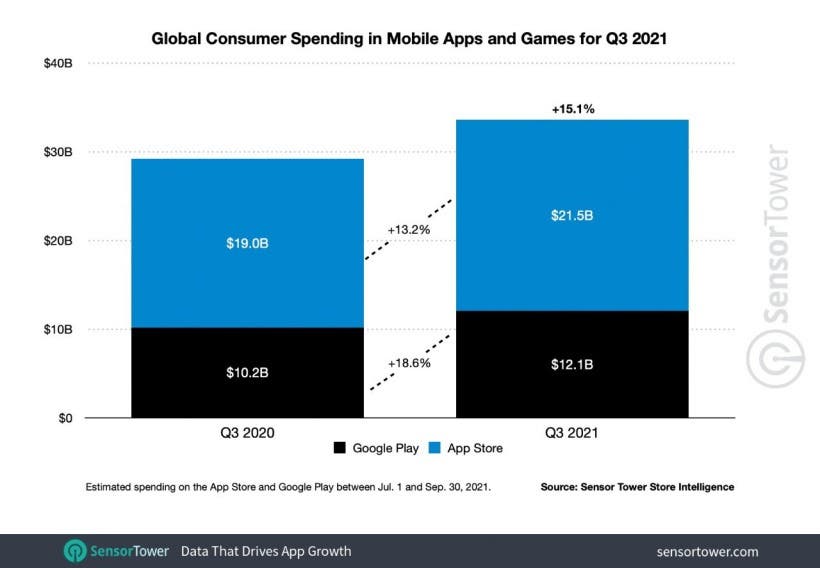 The Apple App Store revenue rose to $21.5 billion from $19 billion, an increase of 13.2%. In addition, the number of users who installed the app for the first time has decreased compared with last year. SensorTower said: “In the third quarter of 2021, the number of App installs in the Apple App Store (for the first time) fell by 1.2%, from 8.2 billion to 8.1 billion. Google Play Store first installs fell by 2.1%, from 28.2 billion to 27.6 billion”.

Apple’s App Store is currently the subject of accusations by many antitrust agencies around the world, and Apple has been making changes. However, Morgan Stanley analyst, Katy Huberty said that these changes will not cause any significant damage to Apple’s App Store sales profits.

Apple is so stringent that any third-party installation or payment in the App Store must go through Apple. At the same time, Apple’s app payment rake is very high, even the highest in the world. This is the main reason why many platform payments or membership are more expensive. However, this situation is about to change.

According to reports, the company recently announced that it will make a number of adjustments to the App Store to settle a US developer class-action lawsuit. The settlement agreement shows that Apple will allow developers to use email and other communication methods to inform users of alternative payment options other than Apple. This means that Apple will allow the App Store to receive payments through third-party channels.

This is a very significant change, and it is good news for both developers and users. Previously, the App Store charged 15% to 30% of transaction commissions. These high commissions to Apple mean that the price of the product will also increase. However, if Apple eventually allows third-party payments, the commissions will be lower and so will be the product. This is the general expectation but it may not be entirely a straightforward process.