Apple unveiled last night two new homemade chips, which will soon equip the MacBook Pro 14 and 16. The most powerful chip, called “M1 Max” promises unprecedented graphics power on a Mac and could even overshadow the latest home consoles, including the PS5.

Is the new MacBook Pro with the M1 Max chip more powerful than a PS5?

The Apple Silicon chips appeared at the end of 2020 on the MacBook Air and the MacBook Pro 13 and quickly got everyone to agree, especially on the particularly impressive “power-consumption” ratio. 1 year later, Apple launched these two new chips: M1 Pro and M1 Max.

M1 Max, in particular, relies on a very large number of GPU cores (up to 32) and incorporates a 10-core CPU. During its presentation, Apple did not hesitate to compare the performance of M1 Max with “high-end gaming laptop PC” type competitors. On their graph, we see an almost equivalent level of performance, but a much lower consumption. 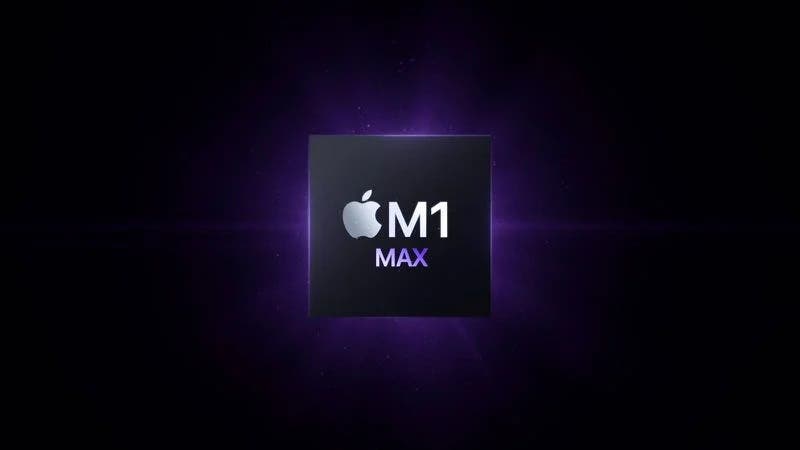 This also has a strong impact on performance when the computer is running on battery. A “gamer” laptop PC equipped with a dedicated graphics card will see its autonomy melt at high speed during intensive use, while showing lower performance. The M1 Max chip on a MacBook Pro, according to Apple, keeps the same level of performance and consumption whether it is on battery or not.

Apple, however, is used to “playing with graphics” to showcase its own solutions and you should therefore be wary of this kind of presentation. However, the 2020 M1 chip clearly demonstrated the company’s know-how in making chips that perform well while being energy efficient. 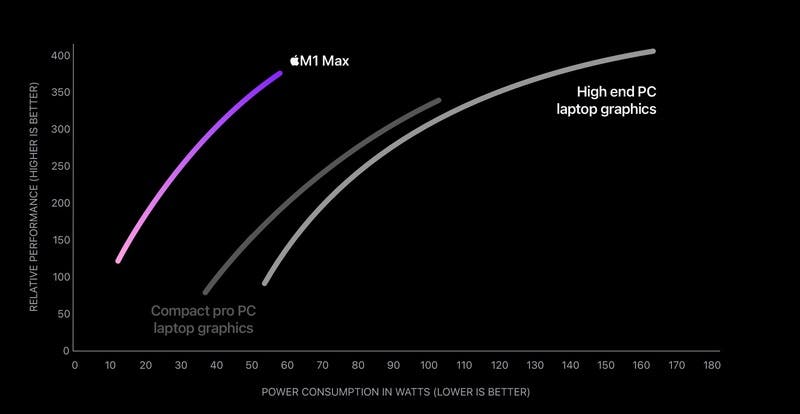 Moreover, based on the known power of the M1 chip and on what is known about the M1 Max chip, the Notebookcheck site, specializing in laptops, had fun calculating the theoretical number of teraflops issued by the GPU of the M1 Max chip. The media estimates that the M1 Max chip, in its version with 32 GPU cores, has a power of 10.4 Tflops. For comparison, a PlayStation 5 has a power of 10.28 Tflops and a desktop PC with a GeForce RTX 2080 goes up to 10.07 Tflops. And the most impressive is that the consumption of the M1 Max chip promises to be much lower than these two machines mentioned above. The GeForce RTX 3080, on the other hand, remains well ahead, with a theoretical power of 30 Tflops.

Notebookcheck’s assertion must of course be qualified and is based only on theoretical calculations. What is almost certain is that the new MacBook Pros, whether with an M1 Pro or M1 Max chip, display an absolutely unbeatable “performance-to-consumption” ratio. And let’s not forget that MacBook Pros, as powerful as they are, are not really gaming machines. And there is also an important “detail” to remember: a MacBook Pro M1 Max in 14-inch version costs at least more than 7 times the price of a PS5.

In short, the new MacBook Pro are indeed shaping up to be monsters of power and perhaps they will be more efficient than a PS5, an Xbox Series X or a GeForce RTX 3080. But whatever, because we are browsing here in very different spheres, whether in terms of pricing or use. Anyway, we can only admire the work of Apple, which seems to be far ahead of Intel, AMD and others when it comes to optimization.