Honor is preparing a new member for the Honor Play5 series. The new device will come with the Honor Play5 Youth Edition moniker and will join other devices in the series such as the Play 5T, and the Play 5T Vitality Edition. The new handset will arrive as a more cost-effective variant for the lineup. The device is now confirmed to debut in the Chinese market. According to the brand itself, the new Honor Play5 will land in its homeland on October 25. Ahead of the launch, the teaser invite confirms some of the specifications coming with the new smartphone. 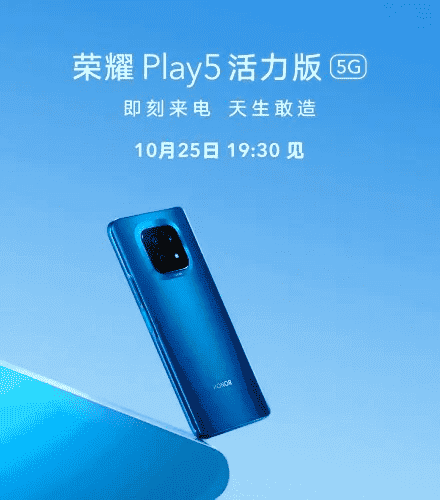 In addition to the image, the invite also confirms that the Honor Play5 Youth Edition will come with a side-mounted fingerprint scanner. This has been commonplace for modern handsets and basically confirms the device has an LCD screen. According to the leaks and rumors, the handset will have a punch-hole cutout for the selfie snapper. However, we can’t determine if it will be a central one or a side-mounted punch-hole. The device is expected to come with a 90 Hz or 120 Hz refresh rate.

The new mid-range smartphone will feature the Dimensity 700 or Dimensity 720 SoC. For now, it’s not clear what exactly will be the chip boasting the handset. However, we can expect it to come alongside 4 GB of RAM and at least 64 GB of Internal Storage. The device will run Magic UI 4.0 probably on top of Android 11. As per the leaks, the device will draw its powers from a 4,000 mAh battery.

Worth noting that Honor never teased the exact specifications of these devices. As a result, we need to digest the leaked specifications with a pinch or two of salt. The device will be a mid-range smartphone, so you can expect the standard package that is offered in this category of smartphones. For now, it’s unclear if the device will hit other markets.