While Hisense has unveiled a range of new TVs with QLED displays in India, Redmi has made its move in China. Xiaomi’s subsidiary has just unveiled two new Redmi Smart TV X 2022 models in its homeland. The new TVs come with 55-inch and 65-inch displays featuring 4K resolution, 120 Hz displays, and features dedicated to watching sports and gaming. In fact, for the latter, the TV has even got an official recommendation from the Xbox team in China.

The two TVs come with HDMI 2.1 ports with support for variable refresh rate (VRR) thanks to FreeSync Premium. The HDMI 2.1 support basically means that these TVs are ready for the “new generation” of gaming. They also come with Auto Low Latency Mode. This allows users to automatically switch to a gaming mode with just 4 ms latency when you hook up a console or PC. If you’re watching a video or live TV instead, then the footage can be converted to 120 frames per second by the TV.

The 4K screens support HDR and Dolby Vision. They cover 94 percent of the DCI P3 color gamut and come with good calibration (detalE around 2). The two smart TVs run MIUI for TV 3.0. Under the hood, they care a Quad-Core chipset with four ARM Cortex-A73 cores. There is also 3 GB of RAM and 32 GB of Internal Storage that isn’t a bad set of specs for a smart TV.

There are two 12.5 W speakers built in with Dolby Atmos support. Also, microphones can easily detect your voice at a distance for voice commands. The two TVs have an all-metal body, including a metal base. In terms of connectivity, they come with 3 x HDMI ports, 2 x USB ports, Network input, AV input, S/PDIF, and an Antenna input.

The new Redmi Smart TV X 2022 models will go on sale starting on October 31. For now, these panels will be exclusively available in the Chinese market. Customers can purchase them through Xiaomi’s own stores as well as JD.com. Right now, you can drop a few hundred yuan to reserve a spot in line. 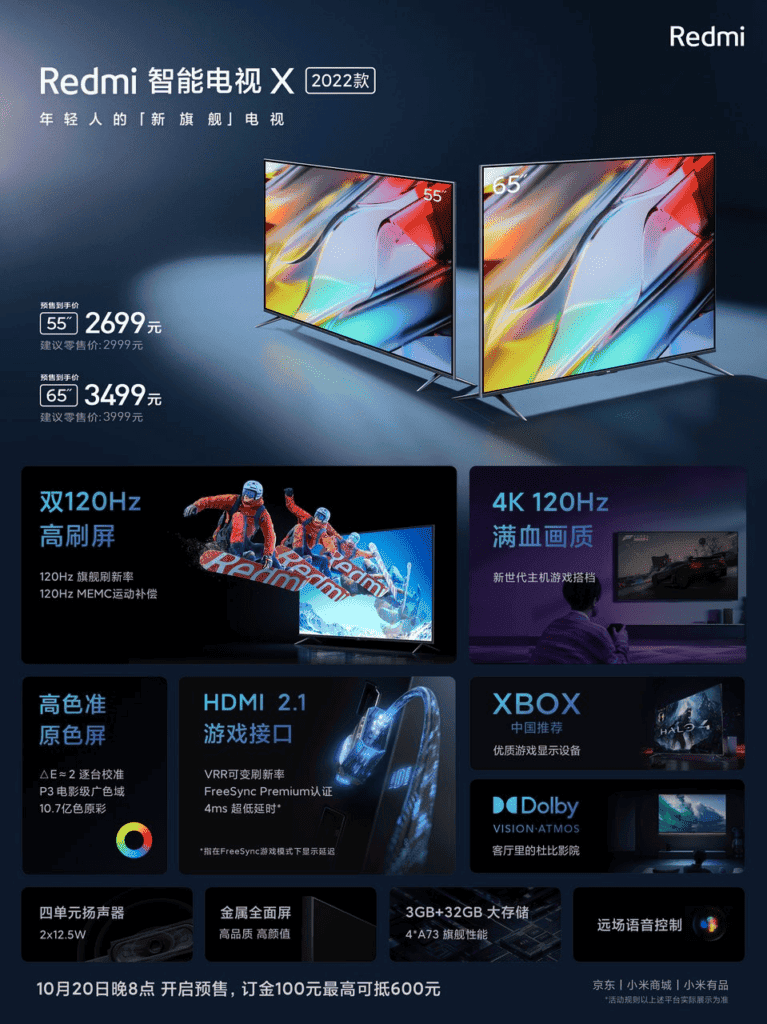 There is still no word on a possible global release. However, we may eventually see these TVs reaching the Indian market.