After months of beta testing, Google finally unveiled Android 12 in full at the beginning of October. However, the company left the Pixel smartphones without them until the Pixel 6 duo announcement that happened a few days ago. Now, Android 12 is present in a very small portion of smartphones worldwide and we assume that this will remain the case until the next year. Android OEMs are starting to unveil their release schedules, and most of them are promising Android 12 to become a reality in most smartphones only in 2022. Today, it’s time for Vivo to disclose its Android 12 update schedule.

Vivo has revealed its Android 12-based FuntouchOS 12 beta release schedule. The update is set to come for around 31 smartphones under the S-series, V-series, X-series, and Y-series. The beta testing will start as soon as the next month. Obviously, the most recent flagships are served firstly, and the premium Vivo X70 Pro+ is the first in line to receive it. 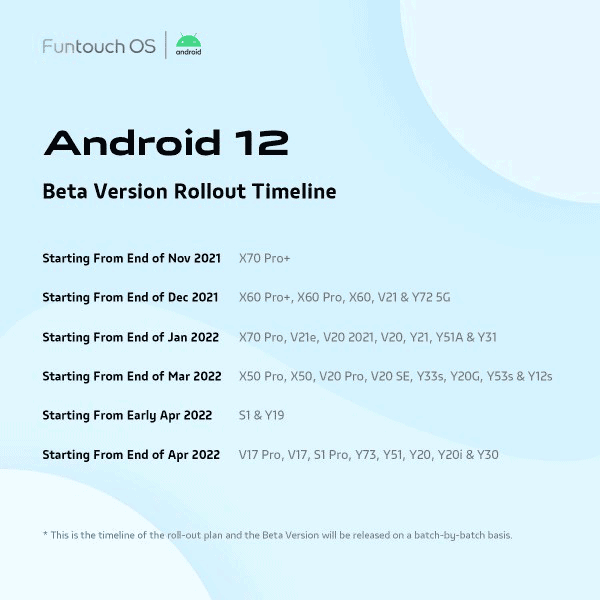 Curiously, Vivo hasn’t mentioned Funtouch OS 12 anywhere in its official communication. However, it’s safe to assume that it will come as Funtouch OS 12 for global smartphones. Chinese units, on the other hand, should get the next Origin OS 2.0. Funtouch OS 12 is the latest iteration of the company’s global software and we already saw it running Android 11, but future versions should come with Android 12. One thing to note is that the current schedule is only for the Indian market. There is a possibility that the company will adopt a different strategy with the international markets.

The roadmap clearly states “beta version”. Therefore it’s hard to determine how long these devices will have to wait for a “stable release”.