Even at the last quarterly event, Apple’s management was forced to warn investors that the impact of the shortage of components is beginning to spread to the iPhone segment, which remains the company’s main source of income. At the end of the third quarter, it became clear that the total quarterly revenue of Apple was lower by $ 6 billion from the likely level, although it grew by 29% year-on-year to a record $ 83.4 billion for the quarter.

September on the Apple calendar closes the fiscal year, so the past quarter was the fourth for the company. Revenue for the whole year increased by one third to $ 366 billion. Revenue growth in all product categories exceeded 20%, as in all geographic markets. Demand for Apple products remains strong, with component shortages and business disruptions in Southeast Asia due to the pandemic being the main obstacles to meeting demand. Apple estimates the loss in revenue due to the shortage of components at $ 6 billion, which is higher than the forecast three months ago. Moreover, in the current quarter, the impact of the deficit will only intensify, according to the company’s management, so the losses could exceed $ 6 billion.

Growth markets in the past fiscal year 2021 provided Apple with about one-third of revenues; while revenues in India and Vietnam doubled. The company’s new products are in high demand, which allows it to look to the future with optimism. Apple CFO Luca Maestri summed up that the entire past year has been a record for the company in terms of revenue. In the last quarter alone, revenue was immediately increased by $ 19 billion. Record revenue was received not only in the product segment ($ 65.1 billion); but also in the services segment ($ 18.3 billion). 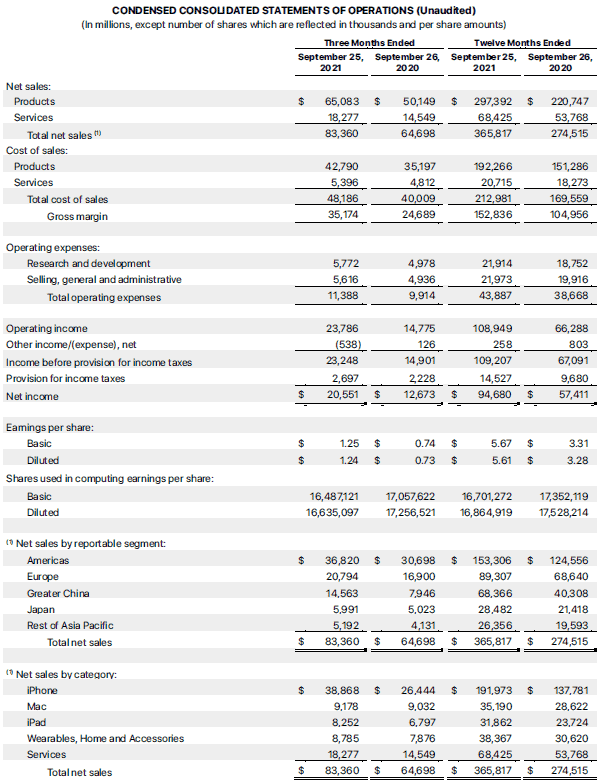 The revenue record had an update in the Mac computer segment, with an all-time high of $ 9.2 billion. Seasonal sales records were achieved in the iPhone, iPad, and wearable and home electronics segments. Smartphones in the last quarter brought Apple nearly $ 39 billion, increasing revenue by 47% year-on-year. The iPhone 12 family continues to be in demand, although the newcomers to the iPhone 13 series are very popular.

For the fifth quarter in a row, revenue from the sale of Mac computers is updating all-time highs; according to Apple representatives, this indicates a high demand for solutions using its own processors of the M1 family. IPads increased quarterly revenues 21% to $ 8.3 billion, even though the impact of component shortages was significant. Roughly half of Mac and iPad buyers bought Apple products in these categories for the first time in the last quarter. Wearable and consumer electronics combined with accessories increased the company’s core revenue by almost 12% to $ 8.8 billion.

The company was forced to lower its profit margins due to component shortages and logistics difficulties. For the company as a whole, the indicator worsened by 1.1 percentage points to 42.2%; in the product direction the decline reached 1.7 percentage points, which corresponds to the new level of 34.3%.