Consumer Intelligence Research Partnership (CIRP) conducted research to find out which smartphone brands enjoy the most loyalty among US customers. As expected, Apple turned out to be the leader. More than 90% of Apple users choose iPhone as their next device.

Apple has the most loyal users: 90% of them switch from iPhone to iPhone

CIRP notes that a huge role in this high user commitment to Apple is that the company is the sole manufacturer of iOS devices. That is, users who do not want to change the usual way of interacting with the device, as well as bother with data transfer, are forced to purchase an iPhone. In contrast, Android users find it much easier to migrate from one smartphone manufacturer to another.

As for other brands that can boast of high user loyalty, Samsung ranks second after Apple. Slightly less than 70% of the South Korean company’s smartphone users prefer Galaxy devices when choosing the next device, which is also a very high indicator. Motorola ranks third. More than 40% of the company’s device owners remain committed to the brand. It is important to note that the study was conducted in the United States, where there are no smartphones from Chinese brands on the market, which explains their absence in the ranking.

The research data also showed that Apple accounted for 43% of all smartphones sold in the US in the past three years. Samsung is in second place with a share of 31%. LG closes the top three with 9%, but this figure will decline rapidly, as this year the company left the mobile market. 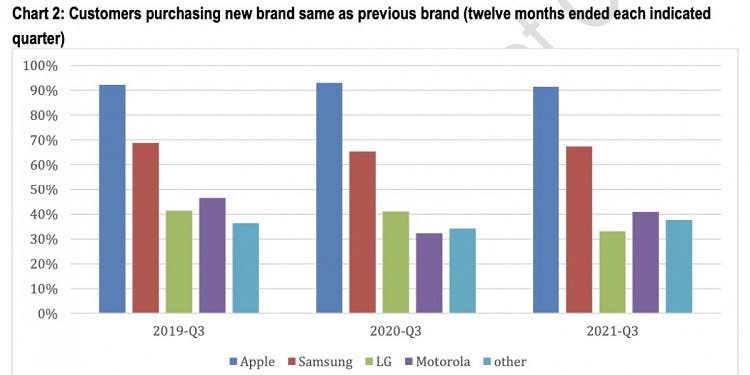 Apple is back to second place among the leading smartphone manufacturers

The stay of Xiaomi on the second line of the world table of ranks of the largest smartphone manufacturers in the world did not last long. At the end of the third quarter of this year, Apple managed to regain its second place in the ranking. This is the conclusion reached by analysts from IDC, who calculated the shipments of mobile devices for the third decade of 2021.

Read Also:  Top 15 facts about the iPhone and Apple - see all 33 iPhone models ever made

Samsung remains the leader with 69 million delivered smartphones and a market share of 20.8%. But this is worse than last year’s result; when in the third quarter the company managed to ship 80 million pipes and control 22.7% of the market share.

As already mentioned, the second place was taken back by Apple, moving Xiaomi to the third position. The concern from Cupertino managed to win 15.2% of the market share; and all thanks to the supply of 50.4 million iPhones. Growth in annual terms was 20.8% and this is the best indicator of growth among all companies. Xiaomi managed to ship 44.3 million mobile devices and take 13.4% of the market share. For comparison, in the third quarter of last year, the company’s indicators were 46.5 million and 13.1%, respectively.

It is expected to see Vivo and Oppo companies in fourth and fifth lines; which control 10.1 and 10% of the market share, respectively. Both companies recorded growth, but Oppo grew more actively than its BBK counterpart – 8.6%. The growth of Vivo compared to the same period last year amounted to 5.8%.

In total, 331.2 million smartphones were delivered to the market from July to September 2021. This is worse than in the same period last year, when shipments amounted to 354.9 million devices. As predicted, the fall was more than 6%.

Previous Subway Strikes Back: Xiaomi 12 leaked in the wild