Google officially announced that the recording App of its Pixel 6/Pro mobile phone has added new features. This feature is the offline voice transcription function. The offline transcription supports German, French, and Japanese languages. It can transcribe users’ voice conversations into text. Google officially announced this feature with a video on its @madebygoogle Twitter account. 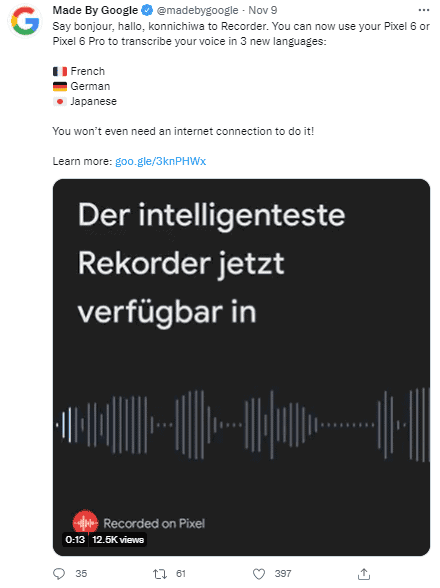 Unfortunately, Google’s other Pixel series phones do not support offline translation in these three languages ​​for the time being. As of now, these smartphones (other Pixel devices) and only support English. Google was able to pull off this feature relying on the machine learning computing power of the Tensor chip. In addition to voice transcription, users can also search for recorded content in the text to quickly locate it.

The voice assistants of the Google Pixel 6/Pro phones now also support German, French, and Japanese. Google is expected to further improve the speech recognition function in the future and give full play to the advantages of the Tensor processor. Unlike previous Pixel series phones, Pixel 6/Pro can perform voice recognition transcription, which can be done almost in real-time with very little delay.

The new bug manifests when the smartphone’s battery gets to 0%. When the battery completely goes down and the user recharges the battery, the under-display camera will fail. Users have been searching for a temporary fix for this issue. However, there has not been any solution so far. Some users tried to re-register fingerprints in the settings. However, this did not work, because the sensor was completely unable to recognize the new fingerprints.

As of now, the only solution for this problem is to reset the smartphone and completely restore it to factory settings. Of course, we know that this will erase the data in the smartphone. This is the only action that can get the fingerprint sensor to work again.

Google Pixel 6 series mobile phones are equipped with a self-developed Tensor chip with a built-in security module. Regarding the slow fingerprint recognition speed of this series, Google officials have explained that the mobile phone use enhanced security algorithms. This means that it may be slow, but it is very secure.