Chinese display manufacturer, BOE, has been struggling to enter into Apple’s supply chain. However, the company has been failing for one reason or another. However, BOE is now officially on Apple’s latest supplier list. The B11 factory in Mianyang has begun to ship the iPhone 13 6.06 inches (6.1 inches) OLED screen. In this regard, many shareholders asked the BOE Secretary of the Board for verification on the investment interactive platform. 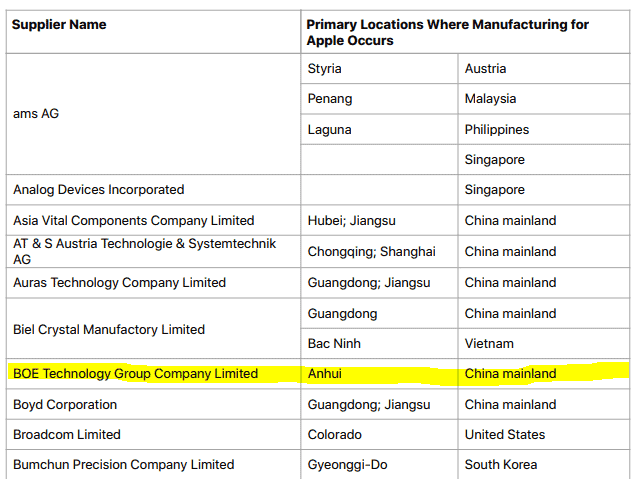 BOE responded that “If you want to know about Apple’s suppliers, it is recommended to refer to the list of suppliers published on Apple’s official website”. According to the company, it maintains a good cooperative relationship with many popular brands around the world.

BOE may not supply displays for iPhone 12/13

The list of suppliers can be viewed and downloaded on the official websites of China and North America. Indeed, BOE is on the list but this is not direct evidence that the company is providing screens for iPhone 12/13. The reasons are as follows:

1. This is a list of suppliers as of the end of Apple’s fiscal year 2020, and the natural time corresponds to September 26, 2020. According to media reports, BOE’s supply of screens for the iPhone 12 only started at the end of last year or early this year. Thus, we have to wait and see the 2021 fiscal year list.

2. The list shows that Apple’s main purchase place is BOE in Anhui, that is, Hefei BOE. However, the iPhone 12/ 13 is manufactured at the B11 factory in Mianyang, Sichuan. Of course, it may be because the iPhone screen is still relatively small.

3. In fact, BOE has already supplied screens for Apple Watch before the iPhone, and the iPhone is not the beginning.

If BOE really rips a hole in the iPhone screen orders taken by Samsung and LG, it is indeed a thing for the company. In this list of suppliers, there are also the names of local manufacturers such as Luxshare Precision, Lens Technology, and GoerTek.

BOE still has some work to do

According to reports from China, BOE is already testing LPTO panels. However, it appears that the company has a lot of trouble with this technology. Therefore, whether BOE will eventually be certified to supply the iPhone 13 Pro series is still unknown. However, on conventional OLED panels, its screen display effect has made great progress. Thus, it will not be a surprise that the Chinese manufacturer supplies panels for the iPhone 12 Pro.

Previous Snapdragon smartphones get Android 12 faster than MediaTek - see why

Next MediaTek: Most advanced 4nm smartphone chip is coming soon