Alleged Realme GT 2 Fold smartphone’s design sketches have been tipped online, revealing some key specifications. Much to the delight of Realme fans, the Chinese smartphone company has hinted at an imminent launch of its first-ever foldable smartphone. Aside from that, Realme has started teasing smartphones that feature an under-display front shooter.

Realme opened up about its plan to make its foray into the premium smartphone category earlier this year. The popular brand announced that it will be unveiling a device that cost more than $800. If previously surfaced reports are anything to go by, the purported handset will go official in 2022. In other words, Realme could enter a new segment next year by launching its first-ever foldable smartphone. Before launch, the alleged Realme GT 2 Fold has appeared online in the form of design sketches.

Regrettably, the company is still mum on the exact launch timeline of the foldable smartphone. Despite the lack of an official confirmation, Realme GT 2 Fold design sketches have surfaced on the web. If the leaked design is anything to go by, the first foldable smartphone from Realme could adopt a folding mechanism that is similar to the Galaxy Z Fold 3. 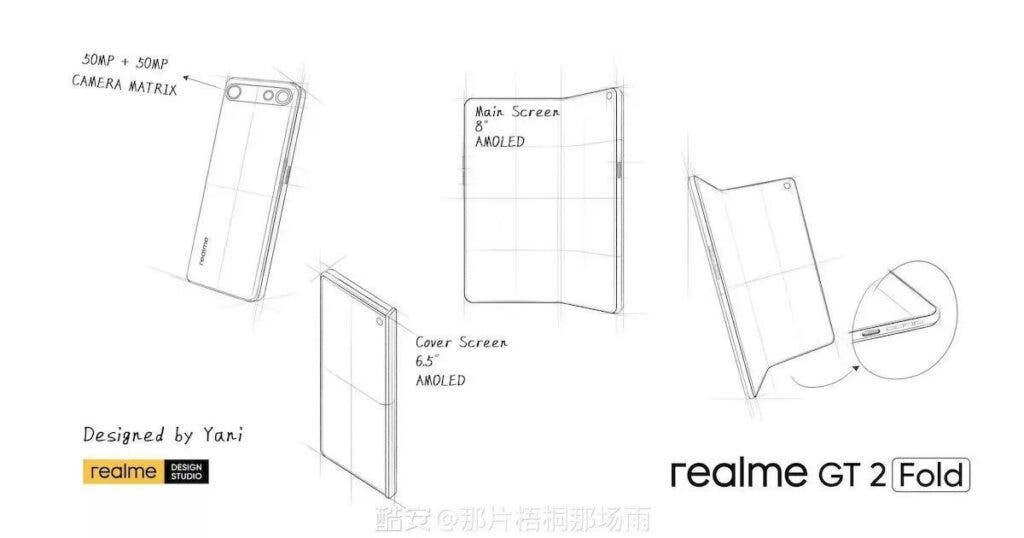 Furthermore, the GT 2 Fold will sport a mammoth 8-inch foldable AMOLED display with a hole-punch cut out to accommodate the front camera. Details about the refresh rate are still scarce.

According to a report from MySmartPrice, Realme’s first foldable phone will offer a high refresh rate of 120Hz. Furthermore, the report suggests that the device will feature a 6.5-inch AMOLED display. The screen will have a hole-punch cutout on the top right corner. However, Realme is highly unlikely to use an under-screen camera since the Realme GT 2 Fold will be its first foldable device. Aside from that, under-screen camera tech is still not fully developed. Also, it doesn’t provide high-quality imaging.

Furthermore, the foldable phone’s rear-mounted camera setup will reportedly house two cameras. These include a 50MP camera, which could come in handy for capturing wide and ultrawide shots. The side edge will feature a fingerprint scanner, as well as a USB Type-C port. More shreds of information are likely to pop up on the internet in the next few days. Also, it is still unclear whether or not the leak is authentic. However, since Realme has started teasing it, the Realme GT 2 Fold could be around the corner.

Next Here is the world's first smartphone with over 20GB RAM