Taiwanese chipmaker, MediaTek has been in the news for the launch of its latest flagship processor, Diemsnity 9000. This chip is currently the world’s most powerful chip (theoretically) in the Android space. However, in a few days, its direct competitor, Snapdragon 8 Gen1 will arrive. Only then can we ascertain the relative practical performance of this chip. MediaTek is on the news again but this time not for the Dimensity 9000. Today, the company released another processor for smart TVs, MediaTek Pentonic 2000. 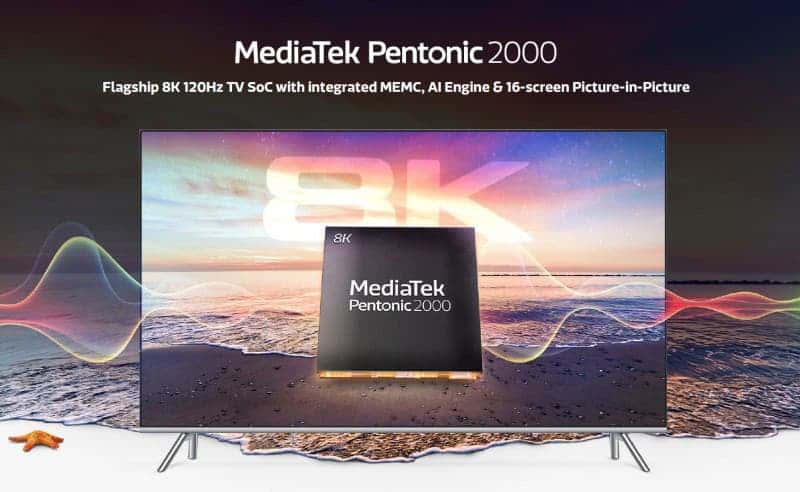 According to the company, this is the world’s first TV chip that uses the 7nm process technology. This chip also supports 8K/120Hz decoding capability as well as MEMC frame supplement technology. Furthermore, the MediaTek Pentonic 2000 comes with a built-in AI engine. The company also claims that as of now, more than 2 billion TVs worldwide use MediaTek processors. The new MediaTek Pentonic 2000 supports UFS 3.1 flash memory and it is compatible with Wi-Fi 6E, 5G, HDMI 2.1, etc. The chip also brings a has high-speed connection performance.

The Pentonic 2000 SoC is the world’s first chip that supports H.266 (VVC) video decoding. This chip also supports AV1, HEVC, VP9, ​​AVS3, and other video encodings. The MEMC dynamic frame supplement function of the product can provide up to 8K 120Hz specifications. The chip has a built-in AI artificial intelligence computing engine, which has the second-generation AI scene recognition function and the third-generation AI object recognition function. This chip also supports intelligent voice assistants and is compatible with up to four microphones. Furthermore, it has an AI voice recognition engine.

Flagship TVs equipped with this chip are expected to be released in the second quarter of 2022.

MediaTek Kompanio 1200 is on its way for flagship Chromebooks

The Kompanio 1200 was first announced a year ago with the model number MT8195. This chip uses Cortex-A78’s 6-nanometer process. Most Chromebooks with ARM processors are entry-level devices. Intel still dominates the high-end Chromebook market.

MediaTek said that the high-end Chromebook market refers to Chromebooks that cost more than $400. In the plan, Kompanio 1200 will compete with Intel Core i3, but can provide better battery life. MediaTek also announced a future processor that will compete in the flagship Chromebook field and compete with the Core i7. According to the company’s naming scheme, the processor may be called Kompanio 2000.