Samsung wants to make a sliding smartwatch with a camera

Letsgodigital has found a company patent in the World Intellectual Property Office (WIPO) that describes a smartwatch with a sliding screen. The thumbnails show the Galaxy Watch, where the display can be “stretched” and increase the usable area by 40%. It is not very clear how it is possible to achieve the desired effect. Also, it seems that this is not a roll-up screen, part of which is hidden in the body and can be pulled out if necessary.

It seems that in fact there will be three small displays, one of which is inside. Interestingly, the additional screen also accommodates the front camera. LetsGoDigital describes a split-screen effect where two parts of the screen can perform different functions. For example, one will contain controls, and the second will display content.

Whether Samsung will ever present such a sliding smartwatch is unknown. Such a gadget is difficult to implement both from an engineering point of view and software. But the idea itself is curious. 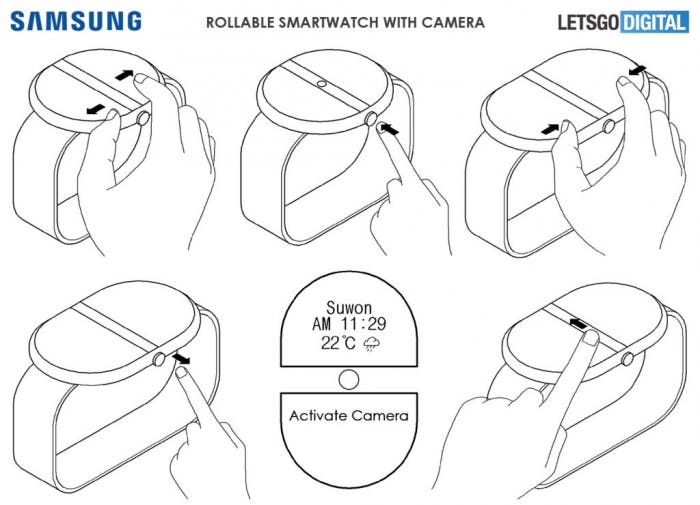 South Korean smartphone giant Samsung will unveil its next series of flagships called the Samsung Galaxy S22 in early 2022, but the smartphones have already been tested in the popular Geekbench benchmark platform, which reveals their characteristics.

The Samsung Galaxy S22 Ultra smartphone comes under model numbers SM-S908N and SM-908U for different markets with different memory sizes. The tested variant has 10 GB of RAM, but versions with 8 and 12 GB of RAM will also arrive.

More information from the Indonesian telecom certification confirms that the device will support Samsung’s S Pen, just like the Galaxy S21 Ultra. According to some recent reports, the Galaxy S22 Ultra will actually arrive with the Galaxy S22 Note naming.

Galaxy Watch WearOS version appears in a yet another leak!