Samsung already started its 2022 range of smartphones with the Galaxy A13 5G. The first “A(nº)3 series” smartphone was launched at the beginning of this month. Despite initial rumors claiming a full 5G route for Samsung, the company will still be launching 4G-only smartphones in the next year. That said, it’s natural to expect the Galaxy A13 to be the first to include a 4G variant. In fact, it seems to be coming soon as a new variant believed to be this Galaxy A13 4G has been spotted at Geekbench.

The Samsung Galaxy A13 4G manufacturing has allegedly started in India. This isn’t a surprise since the variant may be focused on the Indian market and other markets in Latin America. The prototype version has passed through the Geekbench benchmark and now we know some of its key specifications. 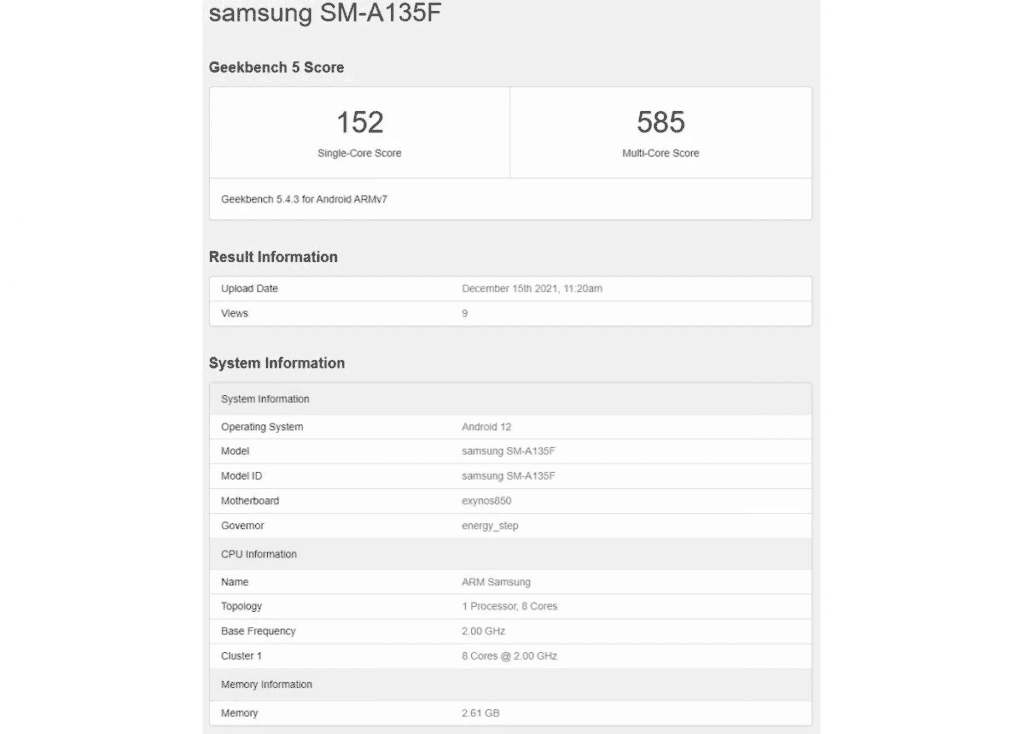 The handset passed by the popular benchmarking website with the SM-A135F model number. The device scored 152 points in the single-core tests and 585 in the multi-core department. These results aren’t really impressive, even for Geekbench 5.0 version. The SoC at the helm is Samsung’s Exynos 850. That explains a lot since this is Samsung’s cheapest and least powerful chipset in the current scene. The handset is paired with just 3 GB of RAM and runs Android 12 straight out of the box. That means that the device will run One UI 4 straight out of the box, and this fact may indicate it will come in 2022.

Despite the fact that this variant has 3 GB of RAM, there could be more powerful versions at launch. Of course, this won’t make the Exynos 850 a better chip but will make multitasking smoother. The device may retain its 5G sibling design, and also other aspects may be present like the camera setup and battery capacity.

The new variant may appear in January 2022 in key markets.