Yesterday, Flyme officially announced that the Flyme 9.2 stable version is now available for its recent smartphones. This update is available for the Meizu 18 series, Meizu 18s series, and Meizu 18X. Flyme 9.2 version was officially announced at the autumn new product launch conference on September 22 this year. This version of the system brings many new features such as brand new system fonts, memory expansion functions, and small window mode 3.5. 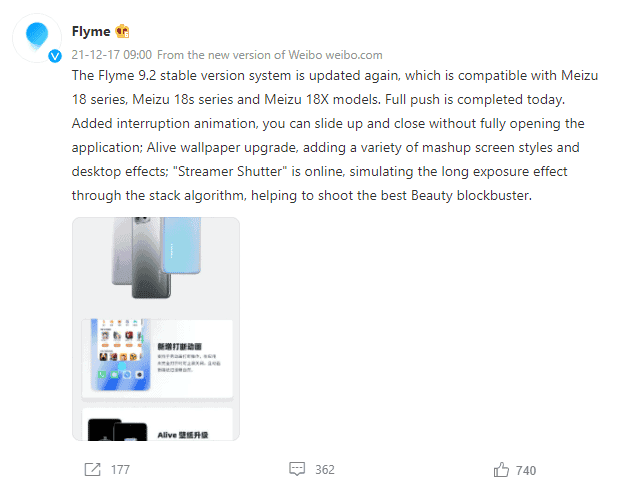 In this update for Meizu 18 series and other models, Flyme emphasized the three new functions of version 9.2. First of all, the 9.2 version update adds a special “streamer shutter” function for taking pictures. This can simulate the long exposure effect through algorithms and supports four shooting templates: busy, silk flowing, oily sunset, and romantic star trails. This helps users to take satisfactory landscape shots.

Flyme 9.2 brings a lot of upgrades

Also, the Flyme 9.2 update also redesigns the bright screen dynamic effect which is more delicate and flexible. The animation also slowly lights up from the brightest parts which clearly upgrades the appearance. This system also supports the creation of Alive wallpapers easily with a one-click triple connection.

In terms of functional upgrades, Flyme 9.2 brings a small window mode 3.5, the welt handle automatically fades, immerses, and changes colour. This reduces visual interference and optimizes the experience of floating small windows. It supports “Play on the screen”, you can continue to listen to the sound on the screen. This system also supports “Recently Used” which makes it easier to quickly find apps irrespective of their location.

Flyme 9.2 brings “Elderly Family Design”, which supports large fonts that take effect throughout the device. It also enlarges the click area, and follows the high-contrast colour mode designed by WCAG 2.1 for accessibility guidelines. The latest Flyme upgrade also brings a feature that is very perceptive in daily use-memory expansion. Compared with the mainstream solution, Flyme memory expansion can provide multiple expansion options according to the ROM size, and a 256GB ROM can achieve up to 7GB memory expansion.

In addition, after the 9.2 version update, Flyme added a new interrupt animation. The new animation allows users to swipe up and close the application when the application is not fully open. At the same time, the new Alive wallpaper will meet with users after this update. The upgraded Alive wallpaper adds a variety of mashup styles and desktop effects. According to Flyme, all devices that meet the update requirements will complete the push and update of the new system today. Users who meet the requirements can go to the phone settings to check the update push.

Next Have you used 5G yet? China confirms 6G network will be commercialized in 2030