Xiaomi 12 series will reach the Chinese market on December 28. After speculation and leaks, Xiaomi finally confirmed the flagship series arrival for the next week. We expect three devices to come – Xiaomi 12X, Xiaomi 12, and Xiaomi 12 Pro. Ahead of the launch, the company started teasing some of the key features coming with the new flagship smartphones. Most of the specifications, are yet to be announced officially. Despite this, a new leaked poster has emerged with the complete specs sheet for the vanilla Xiaomi 12.

As previously speculated, the Xiaomi 12 packs a 6.28-inch screen size. The panel has a Full HD+ resolution and 120 Hz refresh rate. Other display features include HDR 10+ certification, a Display Mate A+ rating, Dolby Vision, and more. Under the hood, the phone draws powers from a Qualcomm Snapdragon 8 Gen 1 SoC. The device has up to 12 GB of RAM and 256 GB of Internal Storage. Xiaomi’s upcoming phone will pack a 4,500 mAh battery with 67 W fast-charging support. The phone has 30 W wireless charging. 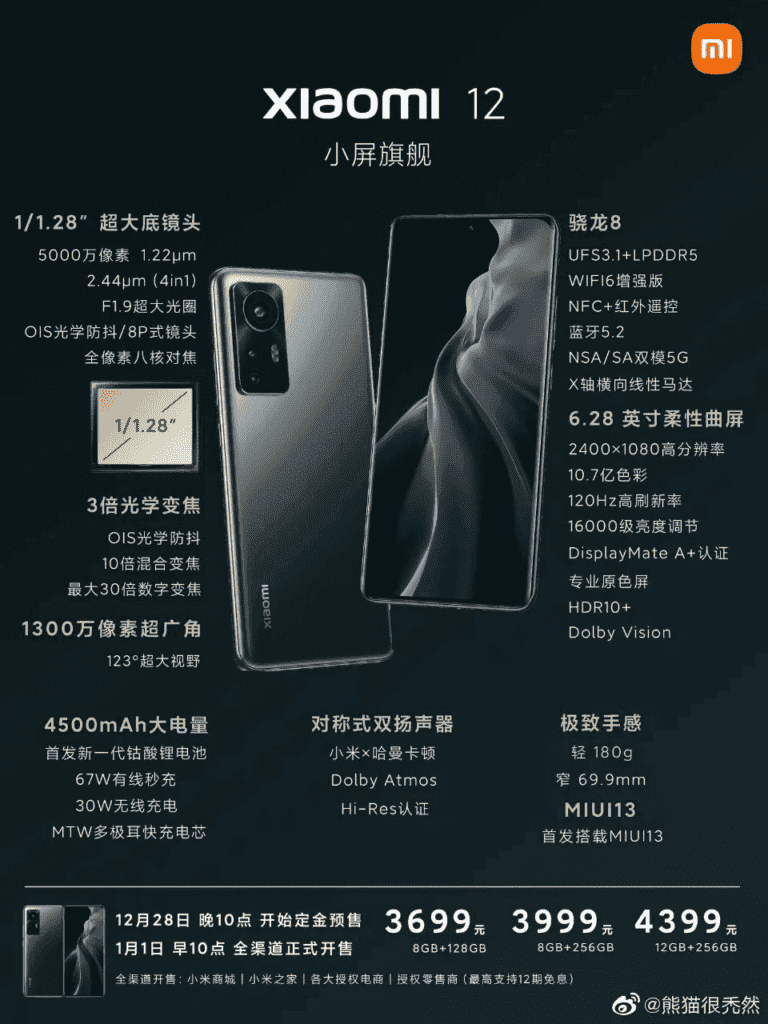 Moving around to the back, the Xiaomi 12 will come with a triple-camera setup. The main camera is a 50 MP snapper with 1.28-inch and Optical Image Stabilization. It comes alongside a 13 MP camera with a 123-degree Field of View and a third telephoto camera that offers 3 x Optical Zoom and Optical Image Stabilization. The Zoom lens support 10 x hybrid zoom and 30 x digital zoom. The handset runs Android 12-based MIUI 13 straight out of the box. The new devices will also mark the debut of MIUI 13. Other features include NFC, IR Blaster, Bluetooth 5.2, Wi-Fi 6E, 5G, X-axis linear motor, and etc.

There will also be a Pro variant with a larger display and higher specifications. The 12X version, on the other hand, is arriving as a more “cost-effective” version with the Qualcomm Snapdragon 870 SoC.