This piece of information has surfaced just a few days after the company revealed the Oppo Enco M32 earphones’ full specifications on its official website and on Amazon. The most notable feature of the Enco M32 is its long battery life and fast charging technology.

An Oppo Enco M32 teaser image on the Amazon app has divulged the price even before the Bluetooth earphones go official. Aside from that, it reveals that the earphones will offer fast charging support. The battery will last up to 20 hours after 10 minutes of charging. The Enco M32 seems to draw inspiration from its precursor in terms of design. However, they seem to come with ear tips that assure a more comfortable fit. The company dubs this as an ear-fin design. 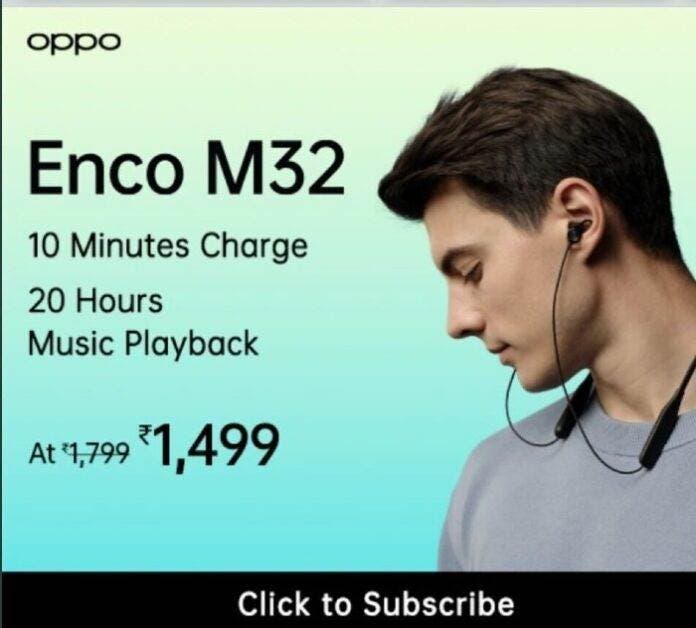 Furthermore, the image suggests that the Oppo Enco M32 earphones price in India is INR 1,499. The earphones are likely to go on sale on the same day as they are announced. In the image, the neckband-style earphones appear in the Black color option. However, Oppo is likely to unveil more color variants at the time of launch. Also, a dedicated Oppo Enco M32 microsite has gone live on the company’s official website with some key specifications.

In addition to that, the Oppo Enco M32 uses flash charging technology. Oppo claims that the earphones can deliver a playback of up to 20 hours after a quick charging of just 10 minutes. Aside from that, they can be fully charged via a USB Type-C cable in only 35 minutes. According to the company, the M32 is capable of offering music playback of up to 28 hours.