Motorola is gearing up to introduce a new Moto G Stylus smartphone. The device will come with the not-so-original Moto G Stylus 2022 moniker and will be a new member of the long-standing smartphone lineup that brings an embedded stylus. Unlike the Note series, the Moto G Stylus does not bring many advanced features, it’s just a smartphone with a simple stylus embedded. Anyway, it apparently sells well, and therefore the Lenovo-owned brand is bringing it for another year. 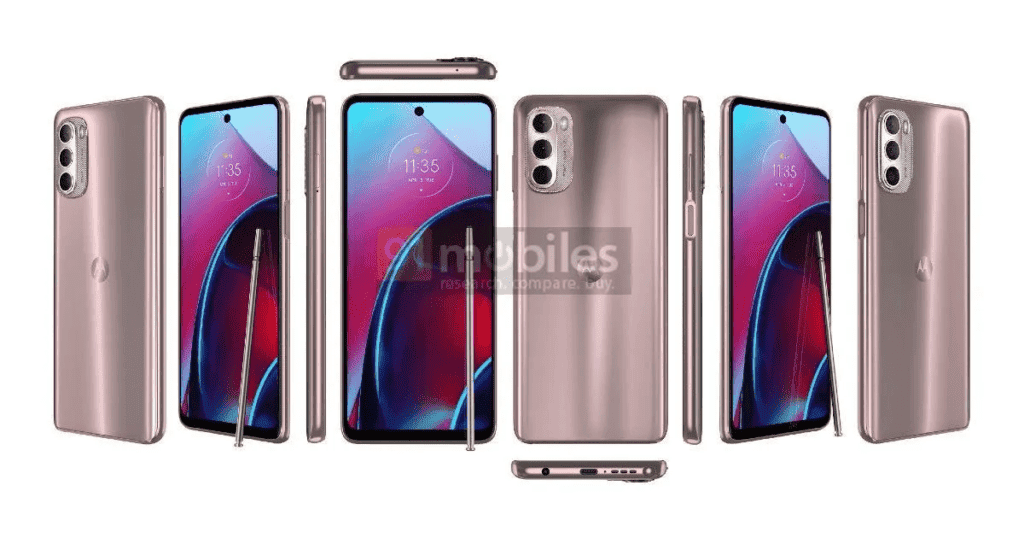 The Moto G Stylus 2022 already had some of its specifications revealed and even the design has emerged thanks to some renders. Now, we’re getting a more in-depth look at the upcoming smartphone. Thanks to a set of official-looking renders from 91Mobiles, we’ve got a new glimpse of the smartphone in a new shiny Gold colorway. The leaked image shows the handset in various angles and we can see the punch-hole display, the rectangular triple-camera shape, and the side-mounted fingerprint scanner. The device also has a USB Type-C port with a 3.5 mm headphone jack sitting at the side.

According to reports, the Moto G Stylus 2022 flaunts a 6.8-inch Punch-Hole LCD with a 90 Hz refresh rate. It also has an integrated stylus with a slot near the bottom speaker. Under the hood, the rumors suggest a Qualcomm Snapdragon 480+ 5G chipset according to the most up-to-date rumors. It will likely come with a 4,500 mAh battery. On the software front will come with Android 12. The handset should come with 6 GB of RAM and up to 128 GB of Internal Storage.

In terms of camera, we expect the handset with a 50 MP main camera with Quad-Pixel technology, resulting in an effective image resolution of 12.5 MP. The other sensors probably are a macro and depth snapper. In terms of connectivity, we expect the device with 5G, 4G LTE, dual band Wi-Fi, Bluetooth 5.0, GPS.

Apparently, Motorola is preparing the Moto G Stylus 2022 to be unveiled around the same time as the Moto G22. The latter is a budget offering and was spotted earlier today through the Geekbench benchmark. Of course, the device has less impressive specs such as the Helio P35 and Android 11. It probably is coming for budget segments.

The company is also preparing its Motorola Edge 30 Pro as a rebranded Edge X30 with Snapdragon 8 Gen 1 SoC.

Previous Motorola Edge 30 Pro will be the international Edge X30

Next Video : Production of the new Note 13P in Ulefone's plant