Not long ago, Xiaomi officially released the new MIUI 13 system, adding many new features and functions. This new system is better than the MIUI 12 and significantly improves fluency. The company’s latest Xiaomi 12 comes with the MIUI 13 system out of the box. Today, Xiaomi officially posted in the Xiaomi Community that some models in the first batch of MIUI 13 development version public beta are expected to receive the update before the end of today. The company will release the MIUI 13 update for over 20 models at the same time. 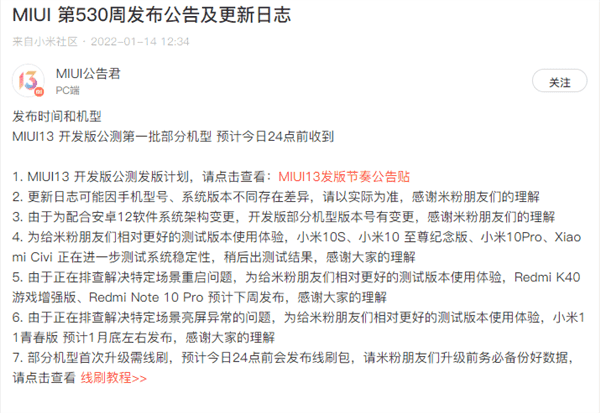 According to reports, the MIUI development version can be upgraded online by entering “Settings → My Device → MIUI Version”. Before upgrading, be sure to back up important data. Users with the above models can upgrade quickly. It is worth noting that although it is still the development version, it can enter the public beta stage. This means that there is no problem with basic use, however, there should still be some small bugs in the system. After all, it is not a stable version, you need to pay attention to it.

In Master Lu’s Android fluency cross-test, Xiaomi’s MIUI 13 ranks first. After half a year of optimization, MIUI 13 has also improved fluency by 15%-52% relative to MIUI 12.5 enhanced version. Relative to the MIUI 12.5 enhanced version, the system application fluency is improved by 20%-26%. There are also a number of high-frequency usage scenarios where the frame drop rate exceeds 90%. Behind the significant improvement in the fluency of MIUI 13 is the support from Focus Computing 2.0. The system not only perceives core scenarios such as full-screen gestures but also tilts computing resources toward the core system for core third-party applications. This significantly improves the fluency of these applications.

Next Microsoft Defender will be available for Android and macOS