The market of Android tablets is trending again with a lot of companies entering the segment. Back in the last year, we saw Realme’s debut in the segment with the Realme Pad. Motorola also decided to return to the market, and even Nokia launched a cost-effective tablet. Now, more brands are set to join this category, and as surprising as it might be one of them is Oppo. The former Realme’s parent company is about to join the segment with the not so originally-named Oppo Pad… Yes, Realme has the Realme Pad and Oppo will have the Oppo Pad. Despite the lack of originality, there is no comparison between the two tablets as Oppo is targeting at the flagship market with the Qualcomm Snapdragon 870 SoC. This certainly sounds as good news as the segment of Android tablets lacks some “flagship appeal” and only Samsung has been actively launching flagships.

Today, the alleged Oppo Pad passed by the Geekbench 4 database with model number OPD2021. The alleged tablet scored impressive 4,582 points in the single-core and 12,259 in the multi-core department. As impressive as these scores may sound, worth remembering that they use the Geekbench 4 standards. Once the device goes through a Geekbench v5 session, then the numbers will be lower and more on par with other Snapdragon 870-powered devices. 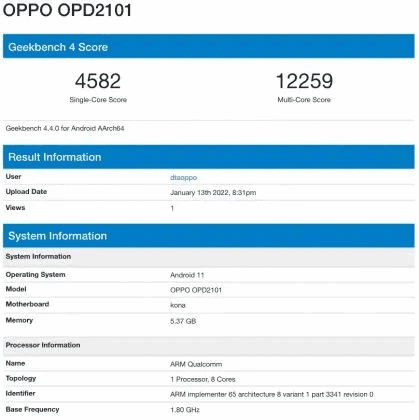 The Geekbench listing affirms the presence of this chipset with up to 3.19 GHz frequency and Kona codename. For those unaware, the SD870 has the powerful Adreno 650 GPU under the hood which can still handle everything on Google Play Store without any hassle. The chipset uses a 7 nm fabrication process and is also inside the Xiaomi Pad 5 Pro. Interestingly, Vivo – Oppo’s sister company, is also preparing a flagship tablet with this very same SoC. Apparently, the flood gates are open and we’ll see a bunch of Snapdragon 870-powered tablets in the next months.

The upcoming Oppo Pad runs with 6 GB of RAM, but we can also expect other variants. It probably has 128 GB of Internal Storage. Worth noting that it’s running Android 11 which is disappointing, considering Android 12 availability. However, this could pretty much be a testing model without finished software. Anyway, we can expect ColorOS 12 to be running on top.

According to previous rumors, the Oppo Pad will cut some corners and will have an LCD panel. Despite the lack of an OLED, it will still offer a 120 Hz refresh rate. Moreover, it will come with an 8 MP shooter for selfies and video calls. Moving around to the back, there is a 13 MP shooter. The tablet will launch in the first half of 2022.

Previous Yet Again, Netflix raises prices for all plans

Next iQOO 9 Price In India, Key Specifications Tipped Before Launch