A mysterious Redmi 2201116SC phone, which could be the Redmi Note 11 Pro 5G, has been spotted on TENAA with key specifications. Before making its appearance on TENAA, the new Redmi phone carrying model number 2201116SC had bagged China’s 3C certification. Regrettably, the device’s TENAA listing did not include images or full specifications at the time of writing. Nevertheless, receiving TENAA certifications is a sign that the Redmi 2201116SC launch is right around the corner.

Furthermore, detail about the Chinese Redmi 2201116SC model’s marketing name is still scarce. However, the global, as well as the Indian models of the handset are reportedly in the works. According to a report by 91mobiles, this device could belong to the much-awaited Redmi Note 11 lineup. However, the publication isn’t sure. Despite the lack of official confirmation, noted leaker WHY LAB has shared a Weibo post (via Nashville Chatter) that divulges the Redmi 5G phone’s key specifications.

As mentioned, the Redmi 2201116SC could go official as the Redmi Note 11 Pro 5G phone, which is set to debut later this month. if this speculation proves to be true, the Redmi Note 11 Pro Global Variant’s key specifications have surfaced on the web earlier this month in the form of marketing material. Furthermore, a Redmi 2201116SR (likely to be the phone’s Japanese version) has made its debut on the FCC website with some vital information. The FCC listing revealed that the handset will support NFC connectivity and run MIUI 13. 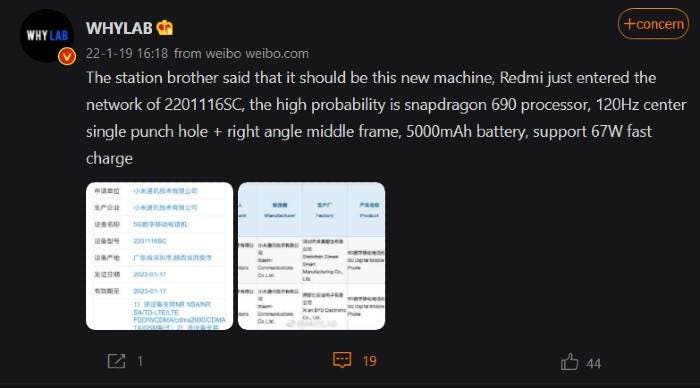 Furthermore, the handset’s 3C certification implies that it will offer 67W fast charging support. According to the Weibo post by WHY LABS, the phone could come with a robust 5,000mAh battery. Aside from that, the tipster claims that the handset’s display will offer a 120Hz refresh rate. Also, it will feature a punch-hole cutout for the selfie camera. Moreover, the leak suggests that the phone could pack the latest Qualcomm Snapdragon 690 processor with 5G support under the hood. The purported device has been subject to multiple leaks lately.

Some leaks claim that the Redmi Note 11 Pro 5G (2201116SC) will house a 108MP Samsung HM2 main camera at the back. Alternatively, the phone’s rear panel could feature a 64MP Samsung GW3 camera. Aside from that, this rear camera setup could comprise an 8MP Sony IMX355 ultrawide camera, a 2MP OmniVision OV02A macro lens, and a 2MP depth sensor. Redmi is likely to shed more light on this mysterious handset’s specs and design in the coming days.