You know the SIM card. It is this small smart card that must be introduced in the right direction in smartphones in order to connect to the network of its operator. Since the arrival of the first mobile phones, the format of the SIM card has changed a lot, going from SIM to mini-SIM and then to nano-SIM. Then, the SIM card was integrated into the motherboard. It then became an eSIM. It happened in 2016.

The eSIM is an almost revolutionary technology, but few smartphones use it. Apple is one of its main supporters: all iPhones have been eSIM compatible since 2018 (with the exception of the iPhone SE). This has three benefits: eliminating physical SIM support, reducing clutter, and bringing Dual SIM capability to phones that aren’t natively Dual SIM. And obviously, the eSIM does not depend on any operator (even if each operator chooses to be commercially compatible or not).

What’s next for the SIM card? It is to virtualize it entirely. Four companies have teamed up to create the first smartphone that connects to a mobile network using an iSIM card, with an “i” for “ integrated ”, as opposed to the “e” which means “embedded”. Who are these four partners? These are Qualcomm, Thales, Vodafone and Samsung. 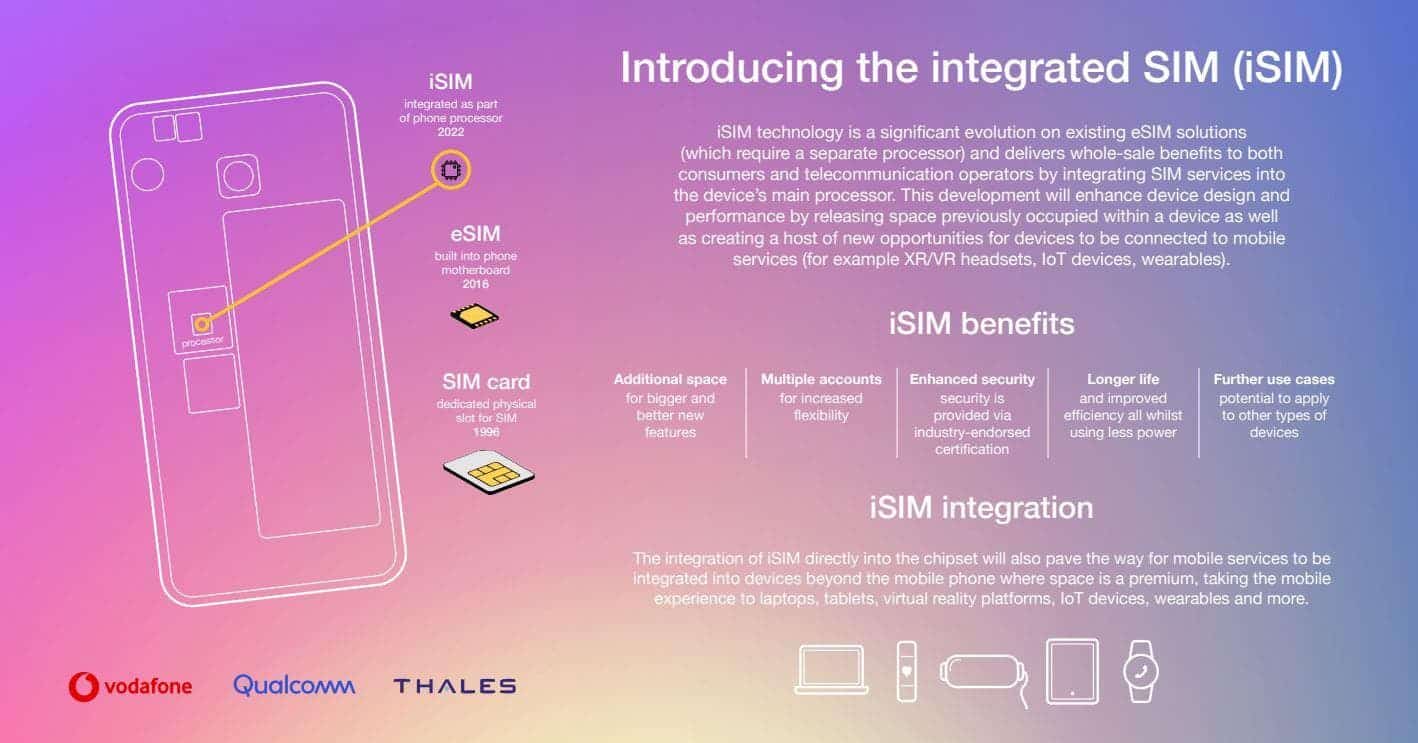 Each partner brings his stone to the building. Samsung has the smartphone. It brought the Galaxy Z Flip 3 which was used for testing. Qualcomm brings the SoC, the famous Snapdragon 888, which embeds a coprocessor dedicated to data security. Thales is the iSIM expert. The French firm has developed a complete system around this technology based on the characteristics of the eSIM. Finally Vodafone provides network expertise.

All four, therefore, developed and operated the first iSIM compatible smartphone, meeting the regulations established by the GSMA, thus ensuring technical interoperability with all operators. This means that all operators will be able to use this technology.

The benefits of iSIM are numerous, especially for high-tech brands: all it takes is a processor to provide a GSM connection to a connected product (tablet, PC, augmented reality glasses, etc.). This further reduces the footprint on the design. Consumers will also connect their objects more easily. But it is above all Qualcomm who will win: the iSIM is a competitive advantage which is not negligible.

The iSIM is bringing multiple benefits:

Next Opera unveils an Android and Windows browser dedicated to cryptocurrencies