Twitter recently announced that it will launch a program on its subscription service Twitter Blue to let iOS users use NFTs as their avatars. Tesla’s CEO, Elon Musk, immediately expressed his dissatisfaction, criticizing it as a “waste of resources”. Yesterday, Musk’s tweet reads “This is annoying” before criticizing the cryptocurrency-related spam problem. Musk wrote, “Twitter is spending engineering resources on this bs while crypto scammers are throwing a spambot block party in every thread!?” 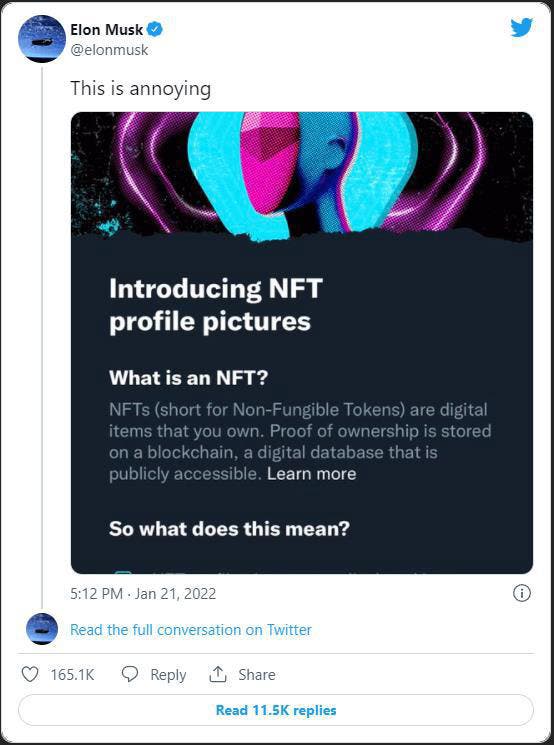 Musk has a long history of being impersonated by cryptocurrency scammers on Twitter. This happens so often that in 2018 Twitter blocked users from changing their display name to “Elon Musk”. In May 2021, spam accounts targeted followers of Musk in cryptocurrency scams ahead of his appearance on Saturday Night Live.

Elon Musk has already expressed support for cryptocurrencies. He announced in March 2021 that Tesla would accept bitcoin payments, but reversed that decision in May, citing environmental concerns. Earlier this month, Tesla began accepting the cryptocurrency Dogecoin as payment for some purchases.

Twitter on Thursday announced new features to capitalize on the digital collectibles boom that has exploded over the past year. The feature connects accounts of Twitter Blue subscription service users with crypto wallets where users can store NFT assets.

Twitter displays NFT profile pictures as hexagons to differentiate them from the standard circles available to other users. Clicking on the image prompts details about the artwork and its ownership.

Like other tech companies, Twitter is racing to cash in on technological trends like NFTs. Twitter last year added the ability for users to send and receive bitcoin, even announcing a new division that will focus entirely on cryptocurrencies, blockchain technology, decentralized applications, and NFTs.

Twitter’s main competitor, Meta (Facebook’s parent company) is also looking to launch a cryptocurrency and NFT technology support. The company is reportedly working on allowing users to sell NFTs on the Facebook and Instagram marketplaces. This will play an important role in bringing NFTs to the mainstream market.

According to market tracker DappRadar, sales of NFTs will reach around $25 billion in 2021. After the release of Twitter NFT, security researcher, Jane Manchun Wong highlights how a glitch in the NFT marketplace OpenSea temporarily prevents NFTs from loading on Twitter. An NFT is a unit of data stored on a digital ledger, called a blockchain. This proves that digital assets are unique and therefore not interchangeable. NFTs can represent items such as photos, videos, audio, and other types of digital files.