The latest data from Counterpoint Technology Market Research analysts on sales of smartphones in Europe suggests that the market has returned to recovery and, at the end of last year, an increase in shipments was recorded. But the fourth quarter turned out to be one of the worst for all of last year and a 1% decline was recorded.

According to the results of the fourth quarter of last year, Samsung became the leader in the European smartphone market, with a share of 33%, and an annual increase of 11%. In second place was Apple with a score of 32% versus 30% a year earlier. The top three is Xiaomi, whose share was 15%, but this is 2% lower than the figure that the company showed in the fourth quarter of 2020. 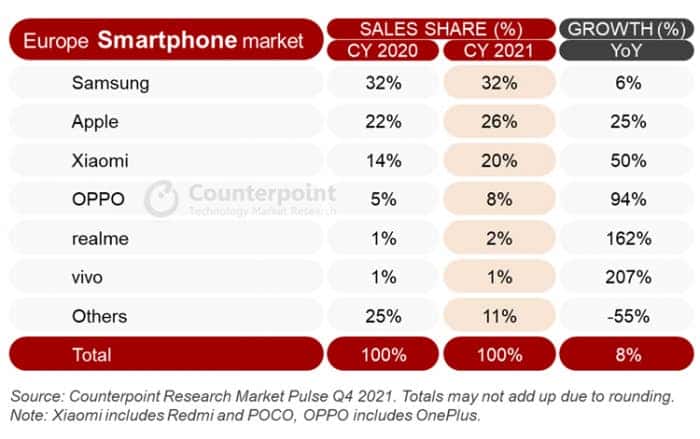 Oppo came in fourth with a 7% share, while Realme moved up to rank five with a 2% share. The record holder for the growth of deliveries was Vivo – 176%. The share of the company in the European market was 2%.

If we consider 2021 as a whole, then the supply of mobile devices increased by 8%. The first line of the ranking of the largest smartphone manufacturers is led by Samsung with a market share of 32%. Strengthened its position Apple, who managed to bring its share to 26% and take second place in the rankings in Europe. The third was Xiaomi with a 20% share, leaving behind Oppo with an 8% share, Realme with a 2% share and Vivo with a 1%. 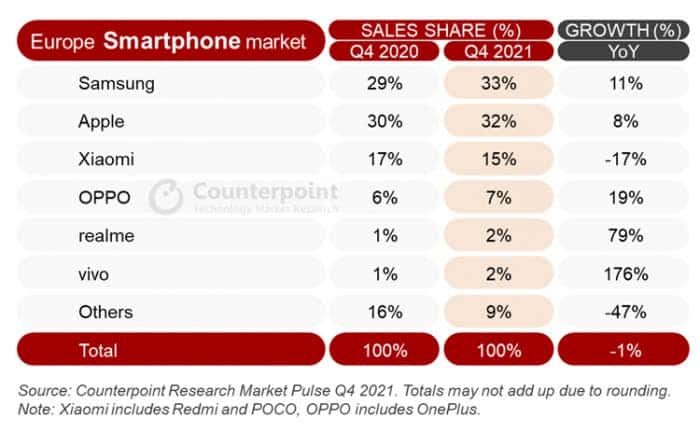 Counterpoint Research’s Associate Director, Jan Stryjak said, “It is great to see the European smartphone market growing in 2021, but that only tells half the story; COVID-19 impacts resulted in a 14% annual drop in sales in 2020, which means the market is still well-below pre-pandemic levels.”

Stryjak added, “a major factor to consider, though, is the decline of Huawei. Huawei’s sales dropped by almost 90% annually in Europe in 2021, leaving it on less than 1% market share and in 8th position (down from 4th in 2020). But while Huawei had another year to forget in Europe, other vendors, especially some of the Chinese challengers, certainly had a year to celebrate.”

Riding the wave of the launch of its first 5G iPhone, Apple started the year on a high with a market leading 34% share. In February, Samsung launched its Galaxy S21 series which, at least initially, sold well, helping Samsung’s sales grow by 24% compared to January and pushing it to the top spot in February 2021. Samsung then suffered significant supply issues starting in May due to COVID-19 related factory shutdowns in Vietnam, which opened the door for Xiaomi to become number one in Europe for the first time, in June 2021 (helped by good growth in Russia, Spain and Italy).

Previous Things, that can be done with the versatile camera of Ulefone Note 13P

Next OnePlus trademarks Two Plus, Six Plus and Eight Plus