On February 15, Realme will be officially disclosing its Realme 9 Pro and Realme 9 Pro Plus smartphones. The company officially started the lineup earlier this month with the Realme 9i. Now, it’s bringing the bigger siblings into this lineup. The company will launch the handsets in India on February 16, but apparently, there are a few lucky owners that already have the device in their hands. That’s exactly the case of the Indian Cricket Team Vice Captain – K L Rahul. A live image has surfaced on the web, courtesy of 91mobiles. It shows the Indian Vice-Captain holding the Realme 9 Pro in its Blue paint job.

According to the report, the famous cricketer will be the brand ambassador for the Realme 9 series. We may see him on more promo material ahead and after the launch of the handset. The leaked image confirms the previously leaked details of the 9 Pro. The handset will feature a shiny glossy back panel with a triple-camera setup. The rectangular camera module seems to be reminiscent of the Realme GT 2 series and will have a different matte finish when compared to the rest of the back panel. In addition to this blue-ish paint job, the device will also come in Midnight Black and Aurora Green colorways. 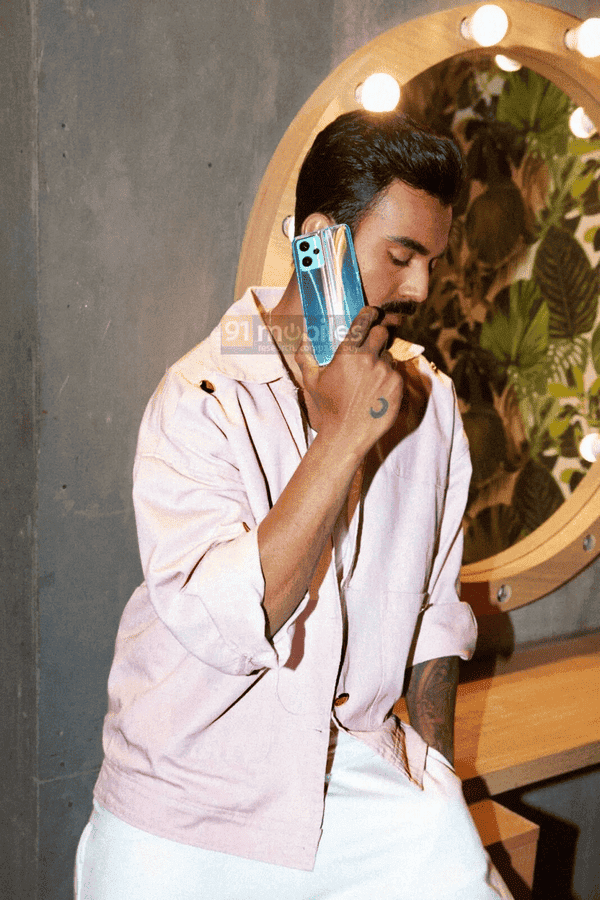 The Realme 9 Pro will pack a 6.59-inch AMOLED display with a 120 Hz refresh rate. The front-facing panel of the handset will house the selfie shooter inside of the punch-hole notch. The device will keep the Realme numbered series signature in-display fingerprint scanner. Under the hood, the handset has the Qualcomm Snapdragon 695 processor with an Adreno 619 GPU. It has a 5G connectivity.

In terms of optics, the Realme 9 Pro will pack a triple rear camera setup with an LED flash. The primary snapper on the handset will be a 64 MP shooter with an 8 MP ultrawide angle lens and a 2 MP snapper. For selfies and video calls, there is a 16 MP camera. The Realme 9 Pro will also bring a 5,000 mAh battery but will drop the charging to 33W. That’s less than the Realme 7 Pro and the Realme 8 Pro had. Apparently, Realme is sacrificing the charging speed to keep the large battery. The Realme 9 Pro+, meanwhile, will have a 65 W charging, but its battery is smaller with 4,500 mAh. Apart from the chipset (Dimensity 920) and the charging speed (65W), we don’t know exactly why the Realme 9 Pro+ is touted as a better offering. It has a smaller display (6,43-inch) with a less refresh rate.

Next Things, that can be done with the versatile camera of Ulefone Note 13P