Samsung has been in a long run to overcome Apple and its iPhone in recent years. In this process, however, rather than trying to offer something else, the company has been “emulating” many of Apple’s practices. For instance, Korean firms became more expensive and “more premium” in recent years. Also, we have been seeing Samsung adopting some of Apple practices, even the most controversial ones like the drop of the charging brick. Even though, the company hadn’t been making much progress in getting loyal iPhone fans to the Galaxy S flagship series. The Galaxy S22 series had just been released by the company, and are these devices strong enough to make an iPhone 13 user switch? Apparently, and as far as a benchmark test is concerned, the answer is no.

Of course, benchmarks aren’t the best way to attest performance in “the real world usage”. However, they are still good tools for reference. Sometimes the result can say a lot about a smartphone, sometimes it doesn’t. However, this case here is simply “unbelievable”. The old iPhone 11 from 2019 has simply outperformed the Galaxy S22 in a benchmark run.

The old iPhone 11 is faster than the Galaxy S22

Previously, we’ve learned that the Galaxy S22 Ultra and S22+ outpaces every other Android smartphone. However, both are crushed by the iPhone 13 Pro Max with its Apple A15 Bionic chip. However, nothing has prepared us for what we’re going to see. 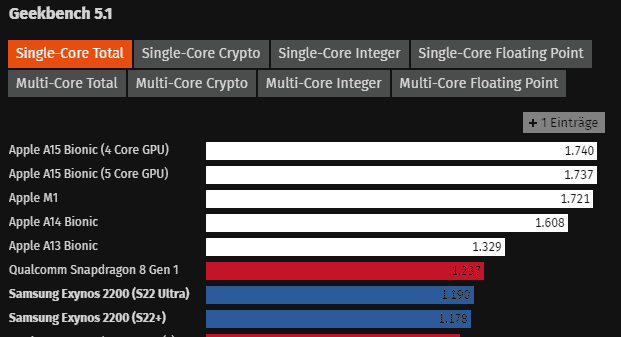 Another benchmark has just emerged and shows that the recently released, 4-nm based, Exynos 2200 SoC in the Galaxy S22 is being outperformed by the A13 Bionic. To those unaware, the iPhone 11 and the current-generation iPhone SE are two devices rocking this particular chipset. The iPhone 11 is pretty old at this time, while the Galaxy S22 is currently available for pre-order.

The Benchmark alone can’t determine if the iPhone is better but still says a lot. It’s just crazy to see a 2019 chipset destroying the 2022 Exynos 2200. In fact, the Exynos 2200 has been surrounded by controversy in recent weeks. Recent reports suggest that Samsung has rushed the Galaxy S22 and is suffering from a lot of issues. Apparently, the chipset isn’t properly optimized, or at least the device isn’t.

There are serious issues with the Exynos 2200 and Galaxy S22

There are reports suggesting that the Exynos 2200 is overheating and the variants with it are suffering from performance throttling. Of course, Samsung can fix this issue or at least minimize it through a software update. Now, the best thing customers can do is to avoid the Exynos 2200. In some cases, avoiding this chip means skipping the entire Galaxy S22 series. After all, Samsung sells these variants regionally. Some countries get the Exynos 2200 while others get the Snapdragon 8 Gen 1 variant. The latter seems to be more optimized.

Once the first units reach the users, we’ll be able to determine how problematic this chipset can be. Let’s see if the iPhone 11 will still outperform this device after a couple of fixes.