Twitter Inc said today that it has suspended all advertising in Russia and Ukraine. The company is trying to ensure that all ads do not weaken the effectiveness of public safety messages on the platform. Russia launched a special military operation against Ukraine on Thursday. Presently, the Russia – Ukraine situation is dicey and Twitter is only trying to be careful. It will be very difficult to sieve out the true information from misleading ones. This is why Twitter is taking the easy route, banning all ads from both regions. 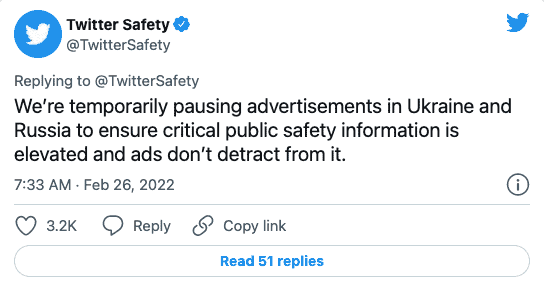 Twitter will not display ads in these markets and will limit tweet recommendations from accounts they have not followed that appear in users’ timelines to limit the spread of misleading and abusive content. Twitter previously said it was “monitoring emerging narratives of violations of Twitter’s rules” as part of its efforts to combat problematic content that flooded the internet during the war.

Meanwhile, Facebook parent Meta is also fact-checking and labeling posts by Russian state media outlets. The Russian government said earlier on Friday that it would partially restrict Facebook’s use in the country in a countermeasure against Meta.

Yesterday, Moscow officially confirms that it will restrict the use of Meta’s Facebook. The state accuses Facebook of “censoring” the Russian state media outlets. Nick Clegg, Meta’s head of global affairs, said on Twitter

“Yesterday, Russian authorities ordered us to stop the independent fact-checking and labeling of content posted to Facebook by four Russian state-owned media organizations. We refused. As a result, they have announced they will be restricting the use of our services”.

Meta has been under huge scrutiny when it comes to handling misinformation. According to the company, any content that it considers false or partly false is shown to fewer users. Clegg said, “ordinary Russians use Meta’s apps to express themselves and organize for action”. The company wants them to continue to do so.

As of now, there is no direct information on the sort of restriction that Russia will impose on Facebook. However, sometime last year, Russia slowed down the speed of Twitter as a sort of punishment.

Roskomnadzor, a Russian mass communication regulator said in a statement.

“In accordance with the decision of the General Prosecutor’s Office, starting from Feb. 25, partial access restrictions are being imposed by Roskomnadzor on the Facebook social network,”

However, this is not the first punishment that Meta will be getting from Russia. Moscow routinely fines Meta for its failure to delete illegal content quickly enough.