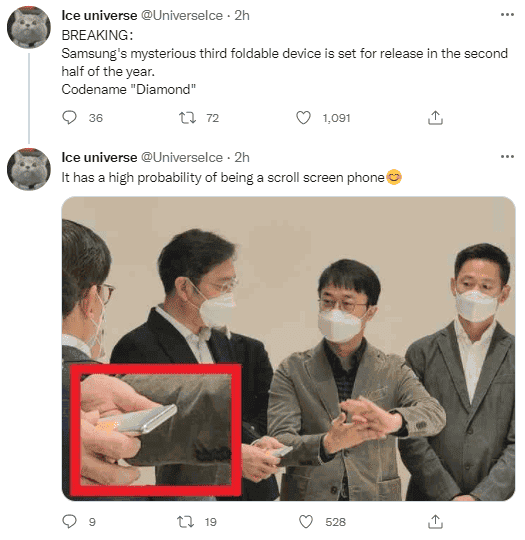 The latest tweet from @iceuniverse reveals that Samsung has a mysterious foldable smartphone that will arrive in the second half of the year. According to the tweet, the codename of this device is “Diamond”. However, there is still some confusion about what this device truly is. There is a high probability that this smartphone could be a scroll-screen smartphone.

As of now, there is not much information regarding this upcoming smartphone. Nevertheless, we will have more information about this device in the coming weeks.

In addition to the third foldable smartphone from Samsung, @iceuniverse also reveals some information about other foldable smartphones. His earlier tweet reveals that the Samsung Galaxy Z Fold4 and Galaxy Z Flip4 will come with the Qualcomm Snapdragon 8 Gen 1 Plus flagship processor. This chip uses TSMC’s 4nm process and he claims that the report is 100% sure.

In addition, the Galaxy Z Fold4 will come with an S Pen stylus like the Galaxy S22 Ultra. This may become a standard for the Galaxy Z Fold series. According to speculations, this foldable flagship should arrive around August this year.