The OnePlus Nord CE 2 Lite 5G has been cycling through the rumor mill for quite some time. The mouthful-named smartphone has emerged on multiple certifications and leaks over the past few weeks. Now, the handset has been listed on Amazon India with some details in tow. The device is rumored to be a rebranded Realme V25 5G or Realme 9 Pro. It will be an intriguing release, after all, the OnePlus Nord CE 2 already is a cost-effective Nord 2. Now, the CE 2 Lite gives one step below in the category and figures as a mid-range smartphone. The device will hit the Indian market on April 28 alongside other products such as the rumored OnePlus 10R.

Interestingly, the next week will be quite hectic for OnePlus fans and those waiting for the OnePlus Nord CE 2 Lite 5G. As per the reports, OnePlus will share more details regarding the camera setup. That will appear on April 19. A few days later, on April 23, the company will disclose display details and the refresh rate. Well, this all feels a little pointless, when every single rumor tells us that this phone is just a rebranded Realme V25 or Realme 9 Pro. Both devices share certain similarities. 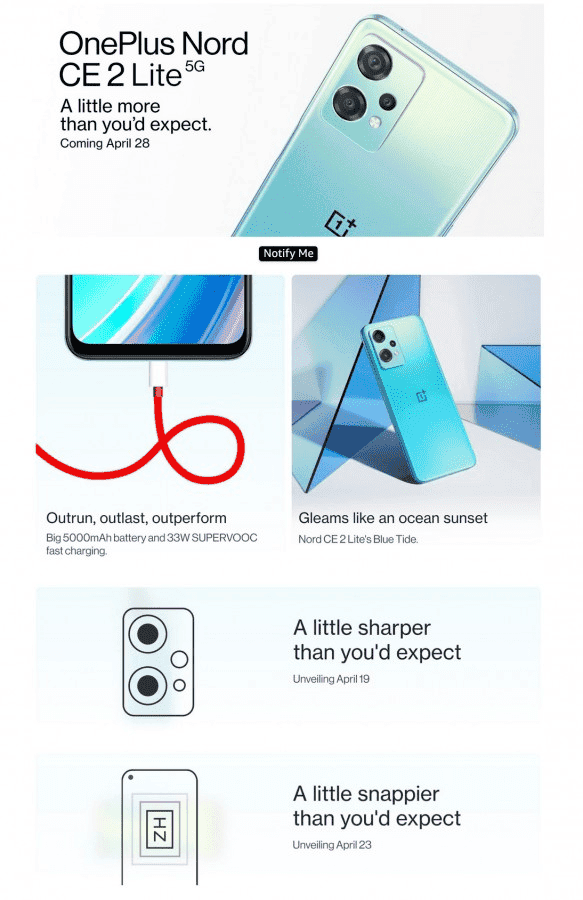 According to early leaks, the OnePlus Nord CE 2 Lite 5G will pack a 6.59-inch with Full HD+ display of around 2,400 x 1,080 pixels. Under the hood, the phone will come with 6 GB of RAM or 8 GB of RAM. In terms of storage, there will be 128 GB or 256 GB of Storage. The horsepower is ensured by a Qualcomm Snapdragon 695 SoC. This platform is present on the Realme 9 Pro and also on the Realme V25. Since the OnePlus Nord CE 2 5G has a micro SD card slot, we’re also expecting its Lite variant to get it.

According to the leaked specs, the phone will pack a triple-camera setup at the back. However, only a 64 MP camera figures as the most notable one. There are two 2 MP snappers for making numbers, and we assume they stand for depth and macro purposes. For selfies and video calls, the phone will bring a 16 MP selfie shooter.

The Nord CE 2 Lite 5G will bring a massive 5,000 mAh battery with up to 33 W fast charging. We expect Android 12 to come straight out of the box with OxygenOS. We expect the company to tease more details in the next few days. We’ll be able to get a better picture of whether the OnePlus Nord CE 2 Lite 5G is an original phone or a rebrand.

Previous iPadOS is about to change - Top 3 possible improvements