According to previous news, Redmi may launch a new “Little King Kong” – the Redmi Note 12 series during April – May. It is worth noting that, according to the product plan announced by Redmi, the Note series in the first half of the year will be the main performance product. This series will come with a comprehensive and balanced configuration. The Redmi Note 12 series will be the “Little King Kong” that focuses on performance. 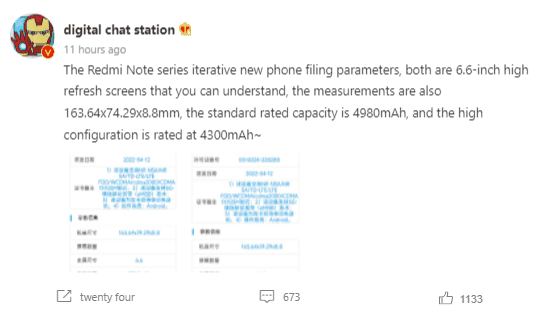 From the perspective of battery parameters, Redmi Note 12 Pro+ should bring stronger fast charging. Based on the previous product plan, Redmi has begun to standardize fast charging of about 67W for the new phone. However, the Pro+, as the top version, may come with a 120W fast-charging capacity.

The biggest highlight of the Redmi Note 12 is its performance. It was previously reported that the series will be equipped with a high-performance platform from MediaTek. This chip will likely be the currently popular Dimensity 8000 series, with very strong performance. If true, this will also be the first time the Redmi Note series has ever used a flagship 5G chip.

Previously, Lu Weibing said that the Redmi Note series will be released every six months. In the second half of last year, Redmi launched the Note 11 series. Thus, we expect this new Note 12 series to arrive in the first half of this year.

There are also speculations that the Note 12 series could also use the Dimensity 1300 SoCs. The Dimensity 1300 is based on TSMC’s 6nm process. The eight-core CPU contains 4 Cortex-A78s, of which 1 Cortex-A78 is a super core with a main frequency of up to 3.0GHz, and there are 4 Cortex A55 cores with a main frequency of 2.0GHz. The GPU of this processor is ARM Mali-G77 MC9.

It is worth noting that the industrial design of the Note 12 series is also a highlight. @Digital Chat Station claims that the Redmi Note 12 series has a highly recognizable industrial design. This device will obviously be a flagship smartphone and it will come with a very powerful performance as well as a decent battery life. Furthermore, this smartphone will also come with a pretty fast charging capacity.