It became known that the number of active Russian-speaking content creators on the YouTube platform has decreased by 21% in the period from February 24 to April 20; according to the results of the Brand Analytics study; which also noted a significant decrease in the interest of users from Russia in Instagram and TikTok services.

“The main figure of today’s observation is a 21% drop in the number of active Russian-speaking YouTube content creators; since the beginning of the war in Ukraine, from February 24 to April 20, 2022. And this is despite the blocking that has not yet taken place” Brand Analytics said in a message.

Note that the largest reduction in the number of authors over the period is on the TikTok short video platform. “The fall of content creators was 87%, content – 93%. This is a direct consequence of the ban on Russian authors from posting on TikTok; as well as the impossibility for content creators to make money on the platform,” the report says. 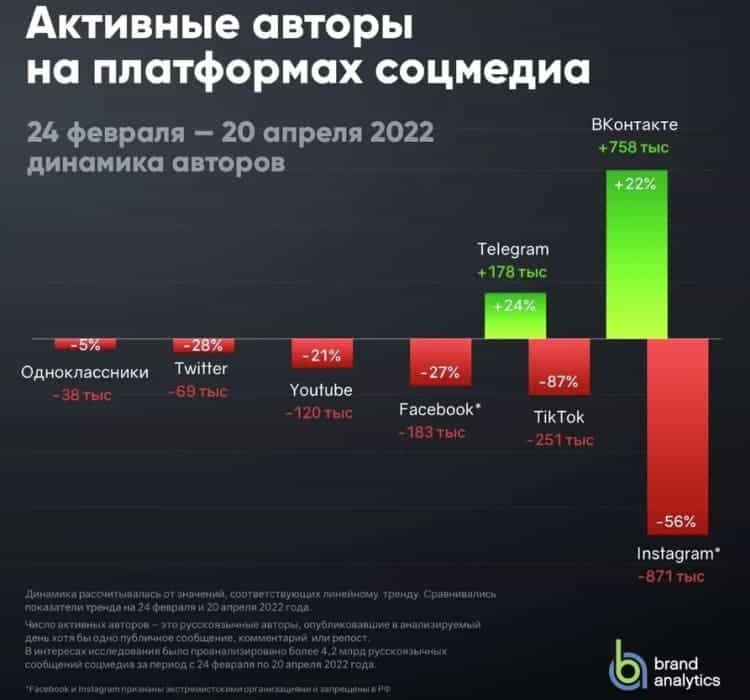 Following TikTok in terms of the number of departed Russian-speaking content creators is Instagram. According to Brand Analytics, 56% of active creators have left the social network owned by Meta; and the amount of published content has decreased by 55%. Such a drop is explained by the blocking of Instagram in Russia and the departure of local advertisers from the site.

According to available data, the Brand Analytics study was conducted on the basis of average values ​​that correspond to a linear trend. The indicators for February 24 and April 20 were compared. Active users in the course of the study were considered to be creators who published at least one post, “story”, comment or reposted an entry on the day of the study.

“Our bloggers have to leave foreign platforms — maybe that’s OK,” Prime Minister Mikhail Mishustin told the State Duma earlier this month. “Our brains, our guys, programmers are able to improve these platforms,” he said; citing as examples Rutube and VKontakte, a Russian version of Facebook. “What is lacking is effective monetization opportunities,” Mr. Mishustin said: “This will return our youth, and give us our own field.”

Next How to enable God Mode on Windows 11