According to fresh reports, the US National Highway Traffic Safety Administration (NHTSA) made Tesla go through a recall once again. According to the documents released today, Tesla will recall around 48,184 Model 3 high-performance electric vehicles in the United States. A similar situation happened in China, and also involves the Track Mode. Under this particular mode, the Speed units are not being displayed in the correct form.

Apparently, the recall involves vehicles manufactured between 2018 and 2022. Tesla will address the issue with a remote software update. The company said a firmware update released in December has inadvertently removed the speed unit from the user interface. The vehicles do not meet federal motor safety standards and could increase the risk of a crash if drivers don’t know how fast they are going, NHTSA said. 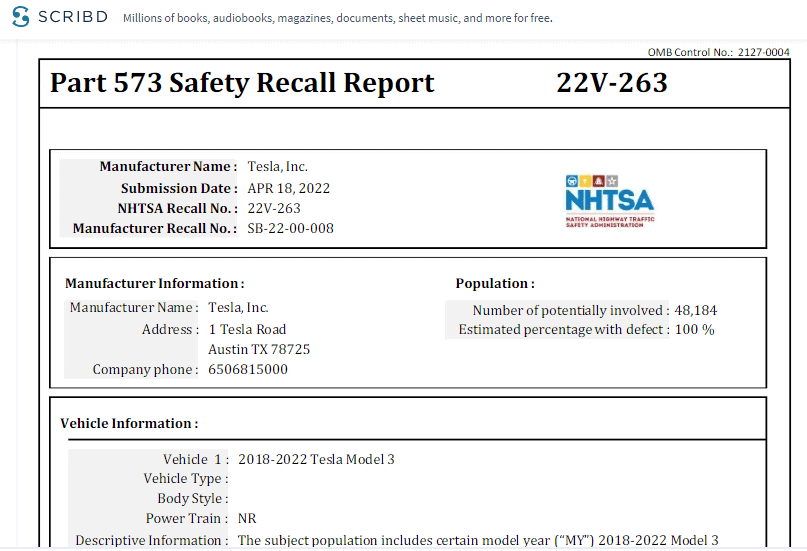 After China, the same issue happens in the US

As we mentioned above, because of the same problem, Tesla had to recall 14,684 Model 3 high-performance versions in China today. It includes 1,850 imported cars and 12,834 domestically produced cars. Worth noting that this is just another case of a recall involving Tesla. The company had to make multiple recalls under pressure from the National Highway Traffic Administration. Interestingly, the company also had to change some behavior of its vehicles. The so-called and funny, Boombox feature, was disabled due to NHTSA concerns involving inappropriate usage. Worth noting, that today, Tesla also separately recalled a Model X produced in 2022. Apparently, the vehicle did not have a bracket installed on the second row of seats.

The NHTSA also says that Tesla has issued a total of 10 recalls this year, covering around 2.1 million vehicles. This is when we are still in April. We are curious to see how bigger this number will grow by the end of 2022. NHTSA, for sure, won’t leave Tesla alone for a single day. The company is severely changing the automobile segment in the United States and in other countries as well. Due to the recent surge in the Electric Vehicle segment, many traditional companies such as GM and Ford are enhancing its efforts to expand its portfolio of electric vehicles in the United States.

Elon Musk has been in the headlines recently due to Twitter and also Tesla. The company had an impressive comeback in China after the new lockdown. Thanks to the Chinese market, it also managed to be even more profitable. Thus, the company is partially funding Elon Musk’s takeover of social media.