Blackview, the renowned midrange smart device provider, is on the rise in the global market. Particularly in Europe, Africa and Asia it’s catching up with its famed counterparts like realme, Oneplus and Xiaomi. They are expanding their portfolio ambitiously every year and now breaking the sales record shortly after the launch of the feature-packed Tab 11. To further solidify their place in the smart device segment, Blackview is poised to launch a tablet called Tab 12. Which, according to Blackview, is the outstanding upgrade over the super popular Tab 8 from 2020. The update is mainly based on improved display, smarter OS and battery with better endurance. But there is more to expect with the new Tab 12.

In appearance, as a further refinement of Tab 8 that features curved edges, Tab 12 has adopted the recent vogue for flat edges design. Which can be also seen on Apple iPad pro and other tablets from smart device giants like Huawei and Samsung. The slate has an aluminum alloy back with matte finish and a glass front. Weighing only 423g and measuring 239.2mm in length, 157.93mm in width and 7.4mm in thickness.

When held in hand, Tab 12 sits comfortably in the hand with silky touch, but firm grip. Besides that, it is compact enough to be effortlessly tucked away inside a handbag, a backpack or a school bag. And to catch up with users’ better aesthetic pursuit, Blackview designers offer Tab 12 in three unique colors, that are most likely to win the heart over its buyers. Specifically Twilight Blue, Lunar Silver and Space Gray. 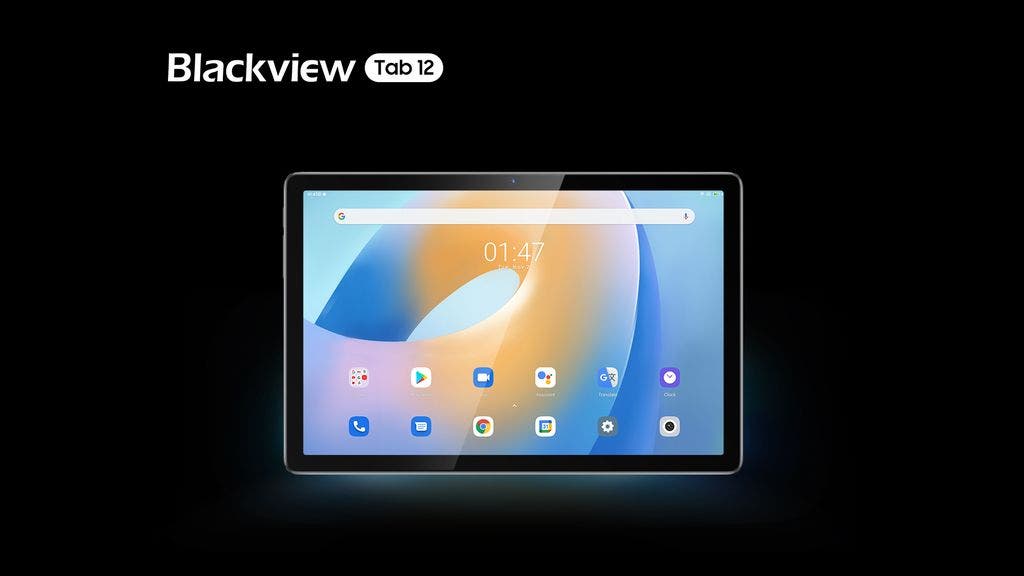 In terms of display, Tab 12 basically shares the same specs as Tab 8 with 10.1-inch screen and 1200*1920 pixel resolution. Thanks to its peak brightness up to 3.0×106 nits and  the FHD+ IPS panel, the display is colorful and pixel-dense. Everything viewed on Tab 12, from website to Tiktok and photos in Instagram, looks sharp, crisp and vivid.

Blackview have also shrinked the bezels of Tab 12 aggressively this time, bringing it to 80% of screen to body ratio. But unlike its predecessor, Tab 12 bears a display with In-cell technology. A trend-setting technology, that makes the screen thinner, lighter and clearer than ever before. Especially when it comes to photo-browsing and live stream-watching, users can explore boundless vividness, clarity and contrast.

From 128GB to 1TB expandable memory

Under the hood, Tab 12 is equipped with Unisoc SC9863A, an 8-core chipset with cores running at up to 1.6GHz. This chipset has withstood the test of market when used in Tab 8, indicating its trustworthy stability in performance over the passage of time. Although Unisoc SC9863A is not the most powerful chipset among mid-range tablets, it is going to handle all the basic tasks including multi-tasking and massive data-processing with ease. Gaming or watching live streams on Tiktok is as fluent as one can expect. 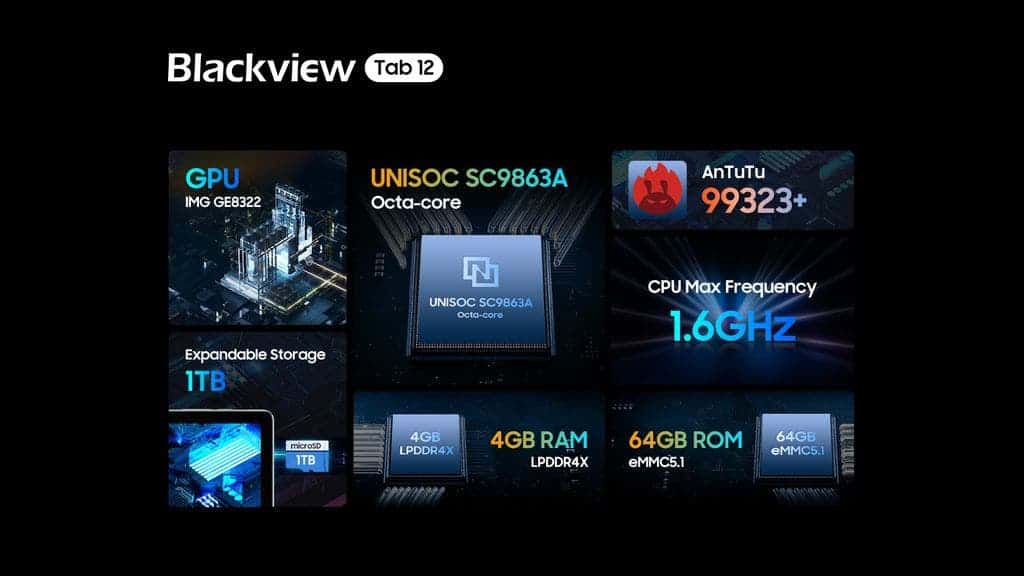 In addition, Tab 12 comes with 4GB RAM and 64GB ROM and if that is not enough, the slate is quite generous to offer up to 1TB expandable storage. A jaw-dropping update from Tab 8, which featured only 128GB. Freeing users from the dilemma of whether to delete old data, or to make room for the new stuff.

Compared with Tab 8, Blackview Tab 12 OS has been overhauled completely with the Doke OS_P 2.0. An operating system, that is the fruit of  the persistent effort of the Blackview software team to design a more customized and fluent OS for more intelligent user experience. 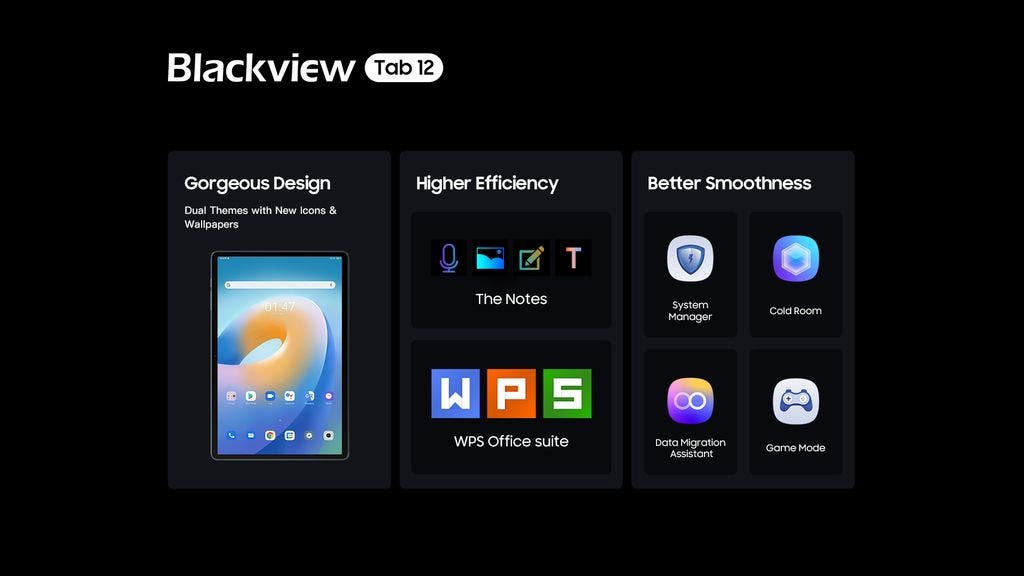 When Doke OS_P 1.0 went live, users had mixed opinions. Some applauded its personal and customized desktop and camera settings, while others asked for further upgrades. In order to satisfy more needs, Tab 12 is coming with Doke OS_ P 2.0. Which has been based on 1.0 and witnessed huge updates in terms of fluency, dedicated apps and smarter interaction. For example, Doke OS_P 2.0 comes with a bunch of self-developed apps such as Cold Room, Game Mode, System Manager and Data Migration Assistant, that will make tablet interaction more fluent and efficient.

And for office workers and students, the good news is,  that Tab 12 will be loaded with the WPS office set and the note-taking apps, the Notebook. WPS will allow users to open Word files, Excel sheets and Powerpoints all in one app, improving the running efficiency of the OS. Whereas the Notebook supports audio, text, picture and even scribble insert, boosting learning efficiency and spicing up boring classes.

Another highlight to note is the Android upgrade from Android 10 to Android 11. Tab 12 is shipped with the 11 version, bringing new features like chat bubble, conversation-prioritizing, screen-recording, one-time permission and a new way to share files. With the help of Android 11, Tab 12 OS will work even better, than expected.

Tab 12 has the same battery as Tab 8, but with more advanced algorithm and mature technology, Tab 12’s 6580mAh battery can last about two times longer than its predecessor. So users can get rid of the battery anxiety, while beating the last enemy in the game or having an important call with a VIP client. According to the battery test carried out at Blackview laboratory, Tab 12 can last for 18hrs for music, 23.6hrs for calling, 5.1hrs for video and even 710.5hrs on standby. 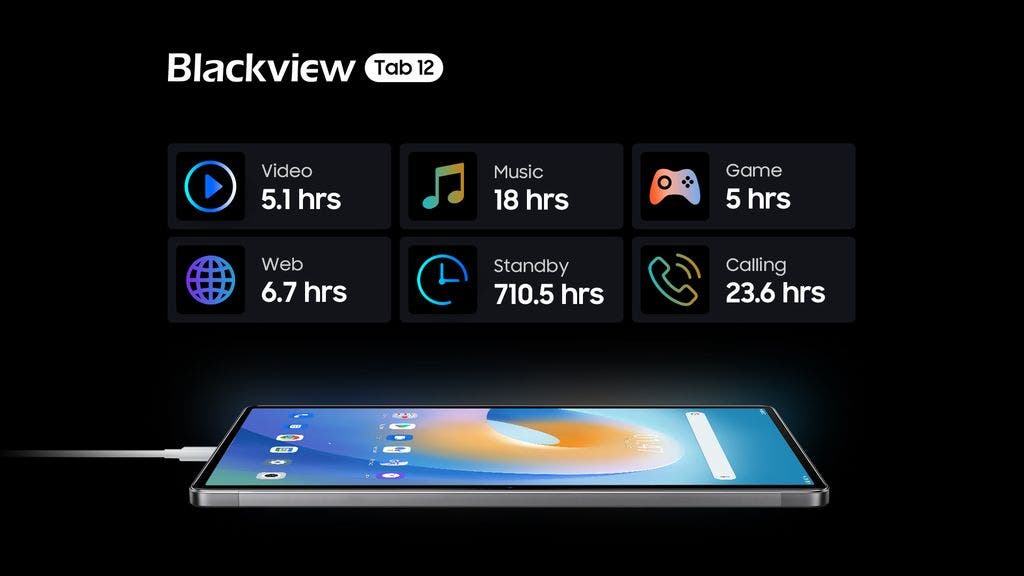 The slate carries a 13MP rear camera and 8MP front camera.  It is quite a delight to take a snapshot with the rear camera. As the photos come out very well with the right amount of vividness and acceptable clarity. Although the front camera can’t compare with the rear one, the 8MP is completely capable of carrying out tasks like online classes and conferences. And it can produce knock portraits with a lot of details.

Unlike Tab 8 bearing non-smart speakers, Tab 12’s 1217 speakers are updated with a smart PA(power amplifier) system and K9 chipset. So endowed with better algorithms and capabilities to mimic real-life sound in a more realistic way. Especially in playing music with a bunch of bass and highs, Tab 12 sounds more dulcet and melodious than Tab 8, which sounds a bit monotonous. Apart from that, Tab 12 steps further in noise reduction, making for clearer and uninterrupted music gala. 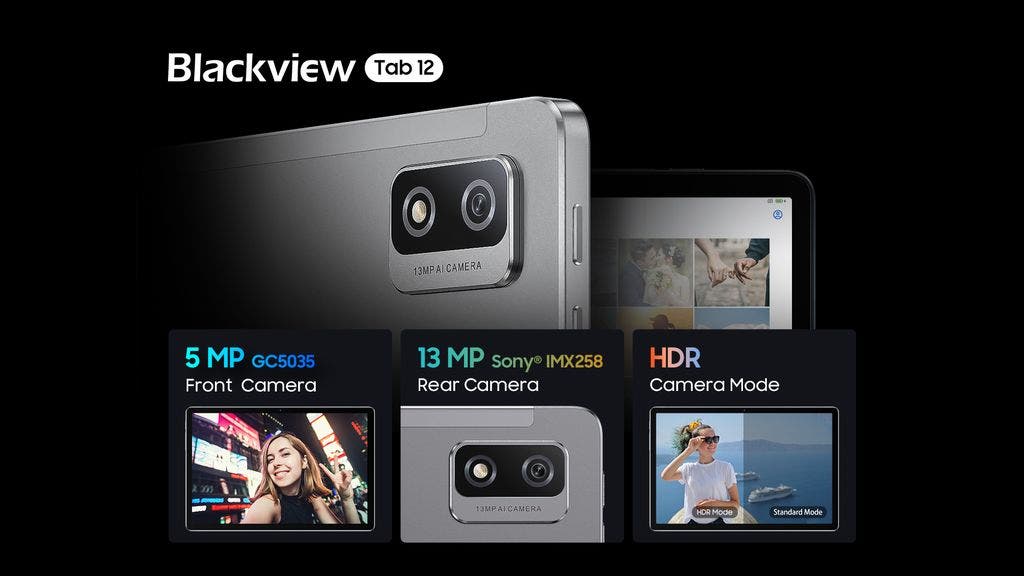 Usually better performance means higher price, but not in the case of Blackview Tab 12. The tablet is now only priced at 145.99$ on Blackview website, since Blackview has always rendered the best value-for-money tablets. Those, who are itching to try it, look no further as this one is going to suit the needs in nearly every aspect. But do remember the sale only lasts 10 days from May 13th to May 22nd. Don’t miss the chance to snatch one up.