Chinese manufacturing giant, Huawei, has been struggling to gain the trust of several nations, especially U.S. allies. A couple of countries have since banned Huawei from their 5G network construction. However, the Canadian government has been taking its time to make a decision on Huawei. After a long wait, its final decision is here. Huawei will not participate in Canada’s 5G network construction. The Canadian government has finally banned Huawei from its 5G network citing security concerns. However, Huawei has always maintained that the bans are politically motivated. 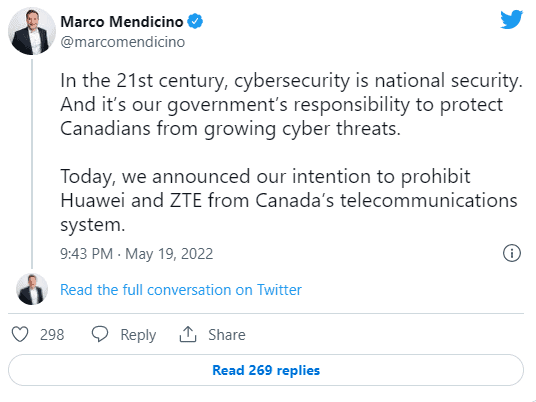 Just like the U.S., Canada also has concerns that it will become vulnerable if Chinese tech giants have access to key infrastructure. To this end, Canada did not just ban Huawei, it also banned ZTE. According to a statement from the government, companies have until June 28, 2024, to remove all 5G equipment from ZTE and Huawei. Furthermore, Canadian carriers will also have to remove 4G equipment from these companies. However, they have until 2027 to do this. Whether it is 4G or 5G equipment, no Canadian carrier will be able to purchase from Huawei or ZTE from September this year.

“This is the right decision and we are pleased to announce it today because it will secure our network for generations to come…Let me be clear, this is about Canada, this is about our national security, this is about our telecom infrastructure,”. The minister further claims that the decision did not consider possible retaliation from the Chinese government.

According to Public Safety Minister, Marco Mendicino, this decision will protect Canada’s 5G network. He also adds that it marks “a new era in safeguarding our telecommunications industry” According to him, taking this decision involves a “thorough government examination [of] 5G and wireless technologies”. He added

“Canada is a country where people can innovate and start new businesses and leverage new technologies in 5G and beyond, but we also need to safeguard against the risks which can be exploited within those networks… It will also establish a framework to better protect the systems vital to our national security and give the government a new tool to respond to emerging cyber threats,”

Furthermore, the ministers claim that the country’s energy and transport have more protection. In addition, its infrastructure in the finance sector will be better.

However, the Chinese government is not happy with the latest move against one of its “golden boys”. The government believes that this move is a “political manipulation” orchestrated by the U.S. It also claims that the target of this ban is to suppress Chinese companies from expanding. A statement on the website of the Chinese Embassy in Canada partly reads

“China will comprehensively and seriously evaluate this incident and take all necessary measures to safeguard the legitimate rights and interests of Chinese companies,”

Despite this strong statement, Beijing will most likely not take any firm response. Recall that after the ban of sales of Huawei’s products in the U.S., Beijing didn’t take similar action against Apple. In fact, Apple iPhones are one of the best selling products in China.

Furthermore, after the initial bans on Huawei and ZTE by the U.S., Beijing also did not take any firm response. Thus, we do not expect the government to do anything different this time.

Canada ban does not surprise Huawei

Despite its disappointment, the ban of Huawei from Canada’s 5G construction is not a surprise to the company. Alykhan Velshi, vice-president of corporate affairs for Huawei in Canada said on CBC’s Power & Politics. According to him, there is absolutely no evidence that Huawei poses a threat to its national security. Furthermore, there is also the issue of scheduled software upgrades for pre-installed Huawei equipment. At the moment, the company is in talks with the government to sort that out. He adds

“I find it hard to believe the government is going to want to suspend those discussions. Our position is we’re going to continue supporting Huawei equipment in the network, and that will require a level of ongoing co-operation at the technical level between Huawei and the federal government — not just in the days and weeks ahead but, frankly, in the years ahead for as long as this equipment is part of Canada’s telecommunications network.”

However, this decision does not affect the 1,500 employees that Huawei has in Canada. This is because most of these employees work in research and development. Furthermore, the decision does not also affect Huawei products such as smartphones and smartwatches. Huawei has been preparing for this ban since 2018. This is why most of its work in Canada focuses on research and development.

However, he maintains that “Huawei will form part of Canada’s telecommunications sector for the foreseeable future”

Canada – China relationship – Will it remain the same?

At the moment, Beijing – Ottawa relation stands at a crossroad and the latest ban sends a “very wrong signal”. Presently, Canadian telecommunication companies have spent hundreds of millions of dollars on Huawei equipment. These funds are basically for 4G equipment. However, the government doesn’t seem to care, they just want Huawei out.

Nevertheless, there could be a lawsuit on the way considering the “foreign investor protection agreement signed by the government of Stephen Harper with China”. Since Huawei Canada is an existing investor with assets, it could make claims against Canada.

Canada’s opposition kicks – says the decision is coming too late

Despite this move, Conservatives strongly criticize the government for taking too much time to make a decision. Raquel Dancho and Gerard Deltell Conservative public safety critics claim that the Huawei ban is coming too late. They said 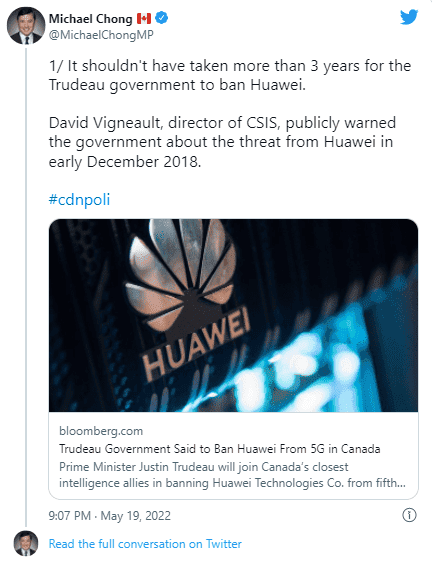 “Conservatives repeatedly called on the Trudeau government to do the right thing and listen to security experts and the calls from our allies — but they refused,”

“In the years of delay, Canadian telecommunications companies purchased hundreds of millions of dollars of Huawei equipment which will now need to be removed from their networks at enormous expense,”

“It shouldn’t have taken more than three years for the Trudeau government to ban Huawei,”

“David Vigneault, director of CSIS (the Canadian Security Intelligence Service), publicly warned the government about the threat from Huawei in early December 2018.”

“It has taken the Liberal government three years to make this decision while the other Five Eyes countries made their positions known much sooner,” he said in a media statement.

“This delay only worked to raise serious questions at home and among our allies about the Liberal government’s national security commitments and hampered the domestic telecommunications market.”

These critics do not want Huawei’s participation in Canada’s 5G networks. In fact, they wanted the ban to happen sooner. They believe that the Chinese government could force Huawei to submit the personal information of users. However, Huawei strongly insists that it is an independent company.