The Ptron Force X10E smartwatch has been spotted on Amazon India. However, the smartwatch’s exact launch date in India is still a mystery. Ptron has been sparing no effort to expand its AIoT portfolio. The Indian electronics manufacturer has launched several AIoT devices lately. To recap, Ptron recently launched the Force X11 smartwatch. Also, it unveiled the Tangent Urban wireless neckband. Now, the brand is prepping to bring a new smartwatch into the Indian market.

To recap, Ptron launched the Musicbot Cube smart speaker in India last year. The Force X10E boasts an impressive array of features. For instance, it has over 300 cloud-based custom watch faces. Now, a dedicated microsite for the Ptron Force X10E has gone live on Amazon India. It reveals the smartwatch’s design, specs, and features. The pocket-friendly smartwatch sports a 1.7-inch squarish HD display with rounded edges. Further, it features a crown button and comes in a metal body. It is also capable of tracking up to 7 active sports modes. 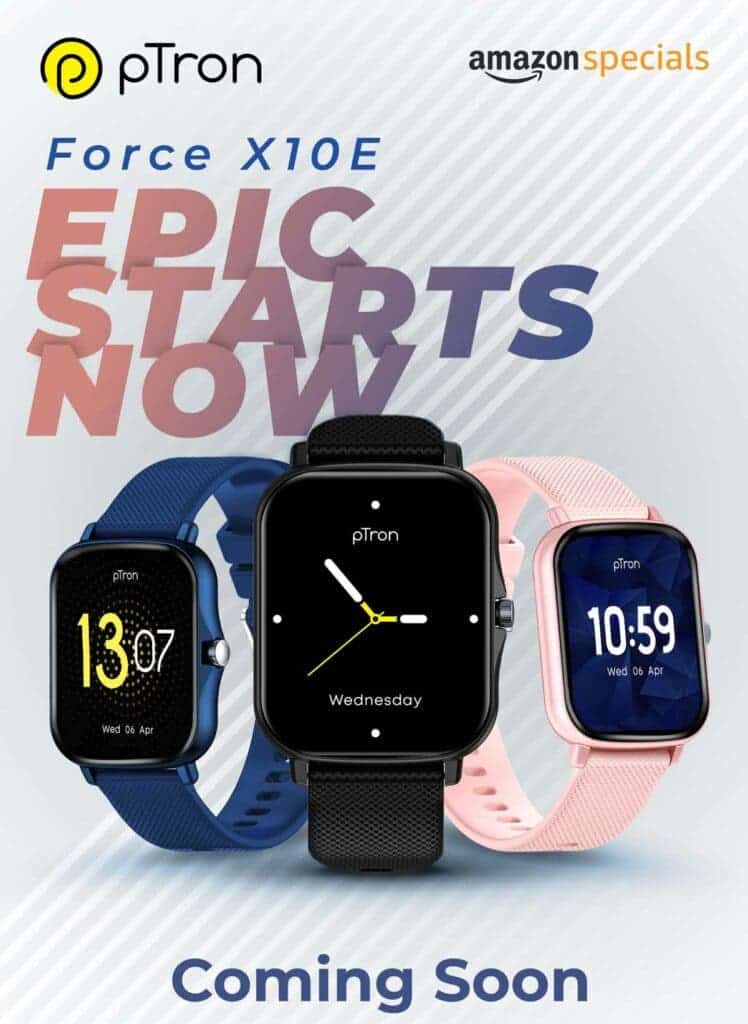 Moreover, the Ptron Force X10E supports heart rate monitoring. It also tracks SpO2, steps, and sedentary alerts. According to Ptron, the smartwatch offers a long battery life. The company claims the Ptron Force X10E can last up to 12 days. Moreover, it can offer a standby time of 20 days. There’s no dearth of feature-laden smartwatches in the Indian market. Leading brands like Boat have tightened their grips on India’s smart wearable segment. In fact, Boat has been on a launch spree lately.

Boat released the Boat Wave Neo smartwatch last month. It targeted budget-conscious buyers by offering a 69 percent discount. Now, the Ptron Force X10E will also offer an unmissable discount. The original asking price of the smartwatch is INR 7,999. However, it will retail in India for a special launch price of just INR 1,799. Notably, this discount will be available only for the first two days on Amazon India. Alternatively, you can buy it from Ptron’s official online store.

However, Ptron hasn’t confirmed the exact launch date of the Force X10E smartwatch. Since it has already been listed on Amazon and the company’s official website, the smartwatch could arrive soon. In the meantime, you can tap the ‘Notify Me’ button on Amazon India. You will get notifications about the smartwatch’s release. Also, the Force X10E comes with a 1-year warranty.

Now, the Force X10E smartwatch has a crown button. It comes in a sturdy metal body. It is compatible with smartphones running Android OS and iOS. Further, the Ptron Force X10E supports 7 active sports modes. It can also monitor the wearer’s heart rate and blood oxygen. The smartwatch can track sleep, and menstrual cycles as well. It also sends sedentary reminders to the wearer and tracks their calorie and step. Moreover, the smartwatch uses Bluetooth v5 to connect to smartphones. Once connected, you can use the watch for calling.

Likewise, the smartwatch supports a remote camera control feature. It delivers a battery life of up to 12 days o a single charge. Also, it takes only three hours to be fully charged.

Previous Noise ColorFit Pulse Buzz To Go On Sale In India Soon, Where To Buy