Nigeria is a very complex country that has so many divides including religion, ethnicity and politics. Considering the current state of the nation, there is this anger that some Nigerians vent out in the most vulgar way possible. Most of these callous comments are usually on social media. This includes the likes of Facebook, WhatsApp, Instagram  (Meta companies), Twitter, Google and TikTok. Unfortunately, most of these platforms do not keep track of these comments and do not delete them in some cases. For this reason and others, the Nigerian government has decided to regulate these internet companies. 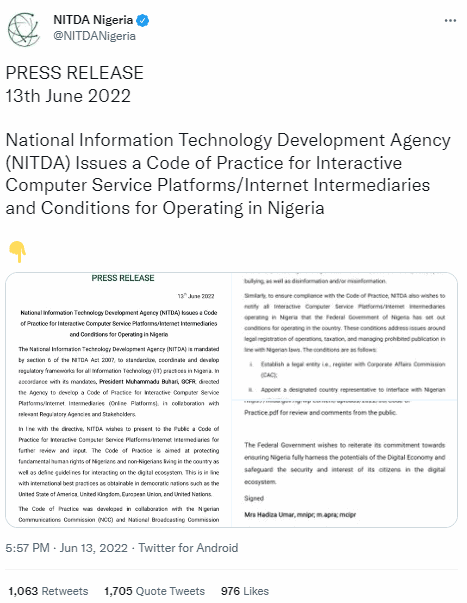 The National Information Technology Development Agency (NITDA) recently released a draft of the regulation on its website and Twitter page. Recall that on 5th June 2021, Nigeria banned Twitter after the company deleted a “harmful tweet” by the president of the country, General Muhammadu Buhari (Retd). After seven months, the government officially lifted the ban. However, Nigerians are not entirely comfortable with this regulation. Some believe that the government will use the regulation to suppress the voice of the people. However, the director-general of NITDA claims that before the reinstatement of Twitter, the company had three agreements. The agreements are

The last point is the problem with many Nigerians. What the people may consider the truth, the government may consider “harmful”. This is why an average Nigerian is not so optimistic about the regulation of these companies.

We are now at the end of the second quarter of the year, however, Twitter is yet to meet any of the conditions. Nevertheless, the Nigerian government is now extending its agreement to other platforms. These includes Google platforms, Meta platforms and TikTok.

The title of the agreement draft is “Code of practice for interactive computer service platform/internet intermediaries”. According to the regulator, the agreements aims at “protecting fundamental human rights of Nigerians and non-Nigerians living in the country” as well as “define guidelines for interacting on the digital ecosystem.”

Join GizChina on Telegram
They include:

“The new global reality is that the activities conducted on these online platforms wield enormous influence over our society, social interaction and economic choices. Hence, the Code of Practice is an intervention to recalibrate the relationship of online platforms with Nigerians in order to maximise mutual benefits for our nation,”.

NITDA has the approval of the presidency

According to the agency, it already has the approval of the presidency before writing the draft. With this statement, it is technically informing the companies that they have no choice but to comply. However, this is only a draft and the final regulations may be different. However, considering the situation preceding this draft, it is most unlikely that any changes will be significant.

NITDA also claims that it will collaborate with NCC, carriers as well as other broadcasting regulatory bodies to get the final regulation. The agency further claims that it will also welcome contributions from the companies which are part of the draft. This suggests that the likes of Facebook, Twitter and TikTok can send in their official contributions.

In addition to the companies involved, NITDA is also opening the draft for review by the general public. However, the agency did not provide any platform for receiving feedback from the public. Thus, it is most unlikely that it really needs the opinion of the public.  After the ban on Twitter, there was a huge outburst and outcry by the Nigerian populace. This is because the temporary ban on Twitter crippled a lot of businesses. Nevertheless, the Nigerian government paid deaf ears to the cry of the people. Despite the strong criticisms on the Twitter ban, the government still gave the nod for the preparation of this draft.

This seem to suggest that the government is not sensitive to popular opinion from users of these platforms. However, this will not be a surprise as it is not the first time the Nigerian government has attempted to regulate social media platforms. Recall that while announcing the ban on Twitter, the Nigerian government also approved the licensing of social media and OTT operators. This includes the YouTube, Zoom, WhatsApp and Skype.

There are already a couple of legal actions challenging the decision of the Nigerian government. However, these legal proceedings may take many years before the case comes to an end. Within this period, the government will have its way with its policies. Nevertheless, considering that the government will change in less than a year, the new government may have absolutely no interest in these legal cases.

With regards to the regulation of social media, NITDA’s draft is the latest development in Nigeria. However, just like the Twitter agreement which Twitter is currently not obeying, many Nigerian’s believe that NITDA’s draft is nothing significant.

Next iPhone: Apple could be fined $900 million for slowing down its old models