After leaks and leaks, the Nothing phone (1) is finally official! The device represents an important step for Carl Pei’s Nothing company. Apparently, a new smartphone that tries to revisit the old OnePlus legacy was always the masterplan of the former OnePlus employee and co-founder. Nothing began its role in the tech segment with wearables and bold promises. However, the company acquired a lot of smartphone-focused patents suggesting its eventual debut in the smartphone market. Now, after rounds of teasers, the Nothing phone (1) is here. The big question is, will it succeed as the “new OnePlus One”? Carl Pei is certainly trying to emulate what OnePlus made with the original One, but the times are different, will the Nothing phone (1) have the same effect?

Nothing phone (1) – brings a unique style

The Nothing phone (1) certainly brings a unique design not ever seen in the smartphone market. The company plays with the transparent concept, and this had already been done, but the device manages to put some unique style in this. Out of the unique design, we have to say that the device looks like a generic phone with two horizontally-placed cameras that resemble the iPhone X from 2017, and a top-left punch-hole at the front. The company claims the device features a recycled aluminum frame, so it’s an environment-conscious device.

The Nothing phone (1) brings in a 6.55-inch OLED screen with 2,400 x 1,080p (Full HD+_ resolution. The panel refreshes at 120 Hz and has a 240 Hz of touch sampling rate. It’s a bright display with 1,200 nits of peak brightness. The device has symmetrical bezels all around and brings a coating of Corning Gorilla Glass 5. Worth noting that the panel has an in-display fingerprint scanner.

Under the hood, the device packs the Qualcomm Snapdragon 778G+ processor. This chipset is not on par with those in the Snapdragon 8 series, in fact, it’s not even better than the Snapdragon 888 SoC from the last year. Still, Nothing was found that it was the best solution for its handset. As per the company, this processor is good enough. Time will tell if this will be a valid choice, but considering the targeted price, a starting brand couldn’t really bet on a higher processor. The price tag of the original OnePlus One is no longer possible with a flagship chipset. 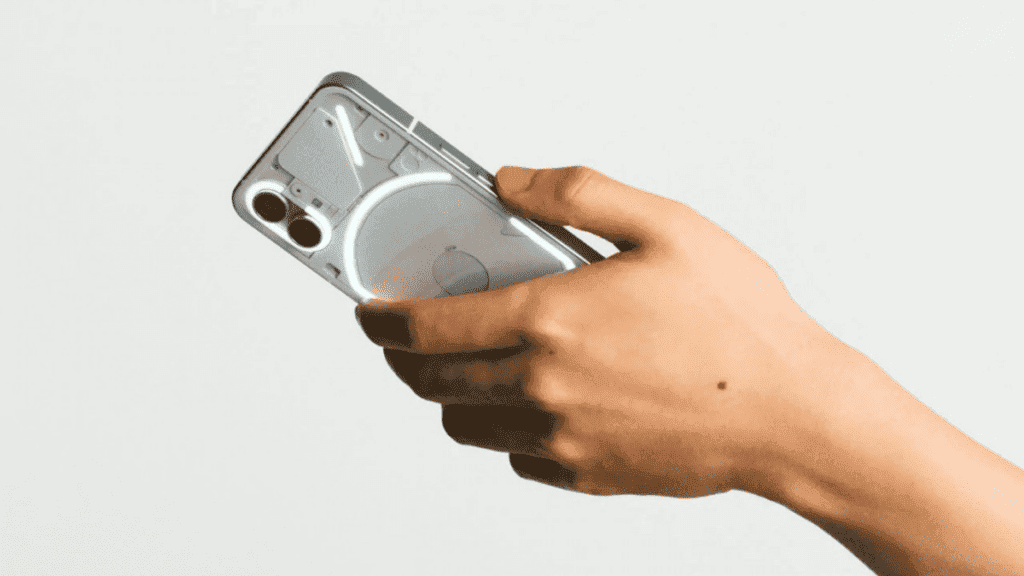 The device brings a dual-camera setup. But I have to say it’s better to have a user setup like this than multiple cameras with questionable use and resolution. That said, the Nothing phone (1) brings a 50 MP f/1.88 Sony IMX766 1/1.56-inch main camera. The main snapper offers Optical Image Stabilization. The second shooter is a 50 MP f/2.2 shooter – a Samsung JN1 1/2.76-inch module – for ultrawide shots. The selfie camera is a 16 MP Sony IMX471 sensor.

The device draws its powers from a 4,500 mAh battery with 33 W wired sharing. This isn’t the fastest standard available and will take 70 minutes to completely charge your battery. Anyway, the device also comes with 15 W wireless charging and 5 W reverse wireless charging. Other features include an IP53 rating for splash resistance. Those who want a charging brick will need to purchase it separately for €35 / £35 / INR 2,499. It’s a 45 W charging brick that can charge other devices faster but for the Nothing phone (1) will limit current to 33 W. 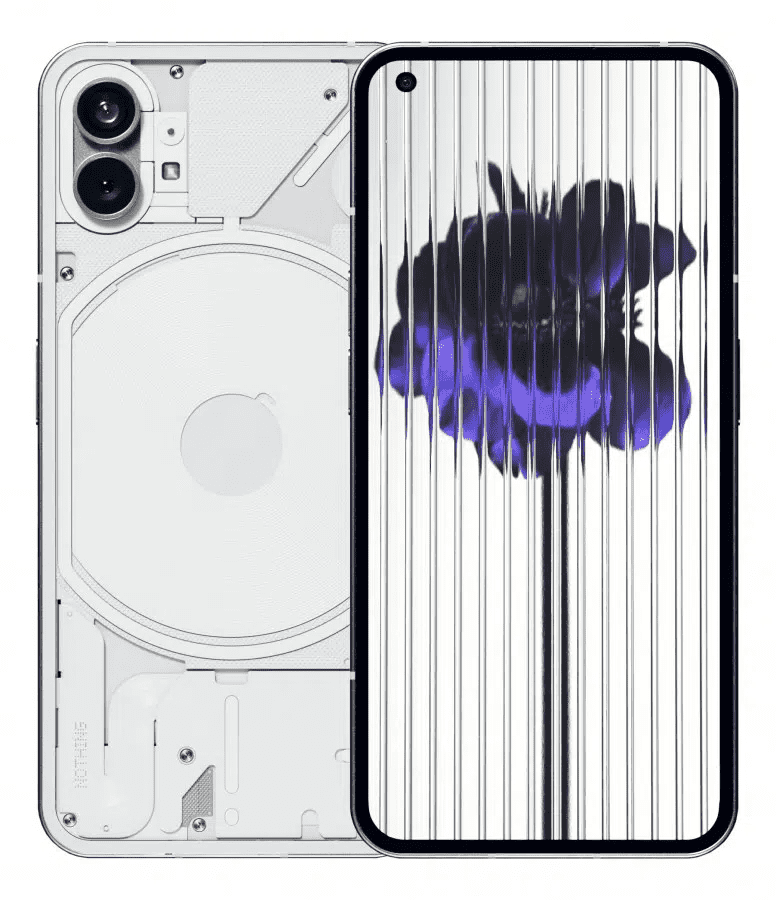 In terms of software, the device runs Nothing OS (1) which is based on Android 12. According to the company, the software comes to provide reliability. It won’t get any kind of bloatware, and the company promises three years of Android updates. There will also be four years of security patches every two months. There are some tweaks over vanilla Android. For instance, there is a Quick Settings Control for the Nothing ear (1). Furthermore, there is another one for Tesla cars. It allows you to turn on the EV’s lights, or AC before you even enter it. Nothing promises you will only get default Android apps. Moreover, the software will be fast and smooth. Interestingly, there is even an NFT Widget that allows you to check your NFT collection straight from the home screen.

Honestly, the device is not really different from anything that we already have on the market. It’s not even a flagship killer. Of course, the company can benefit from good software support which is still one of the lackluster aspects of Android depending on the brand. Apart from that, the transparency and the “Glyph Interface” are what make the Nothing phone (1) unique. The “Glyph” stands as a couple of LEDs in the back. They are placed next to functional areas of the phone. They can show you relevant information. 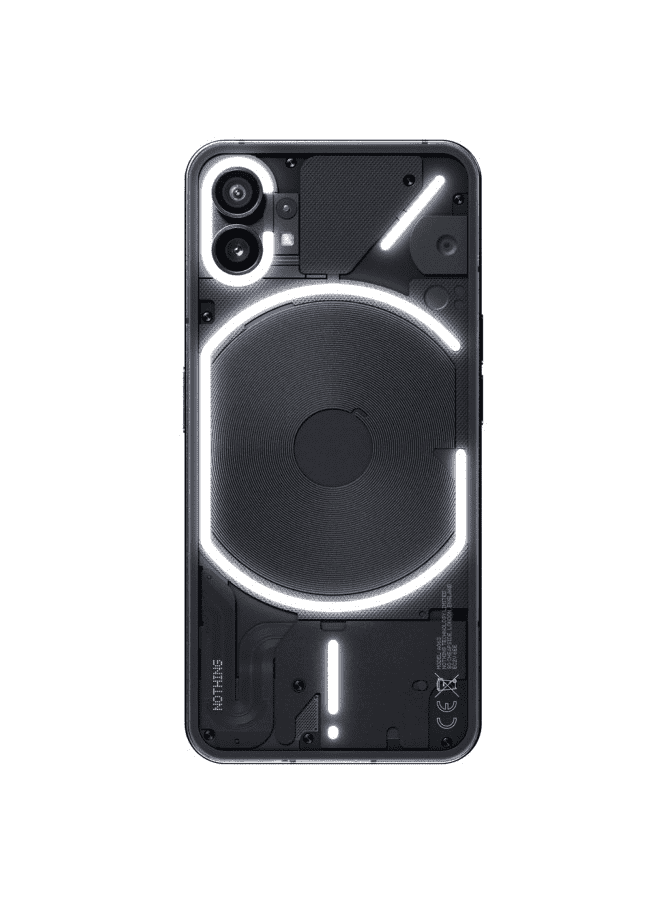 For instance, there is a progress indicator of the charging. When you’re reverse wireless charging there is also an indicator for that. The LEDs can also sync with the built-in ringtones. Some users may find this a big gimmick, while others will find it a cool extra.

Nothing phone (1) – Pricing and Availability

The device will be available in “batches”. The first opportunity to purchase one will be on July 16 at 10 AM local time at the Nothing pop-up kiosk in Covent Garden in London. On July 18, there will be “limited drops with partner retailers”. The first official sale starts on July 21 from the Nothing website and partner operators.

The list of countries where the Nothing phone (1) will sell includes: