Since Blackview launched Tab 8, which proved to be one of the bestsellers, the company has never stopped its steps to upgrade its tablet portfolio. It grew with the Blackview Tab 10 Pro, Tab 11 or Tab 12, each with their own compelling updates. And now they will launch their latest Blackview Tab 13 too. Comingwith innovative upgrades, but this time much bigger and more exciting. We have learned about its expected specifications from the Blackview official sources, so here is what we know. 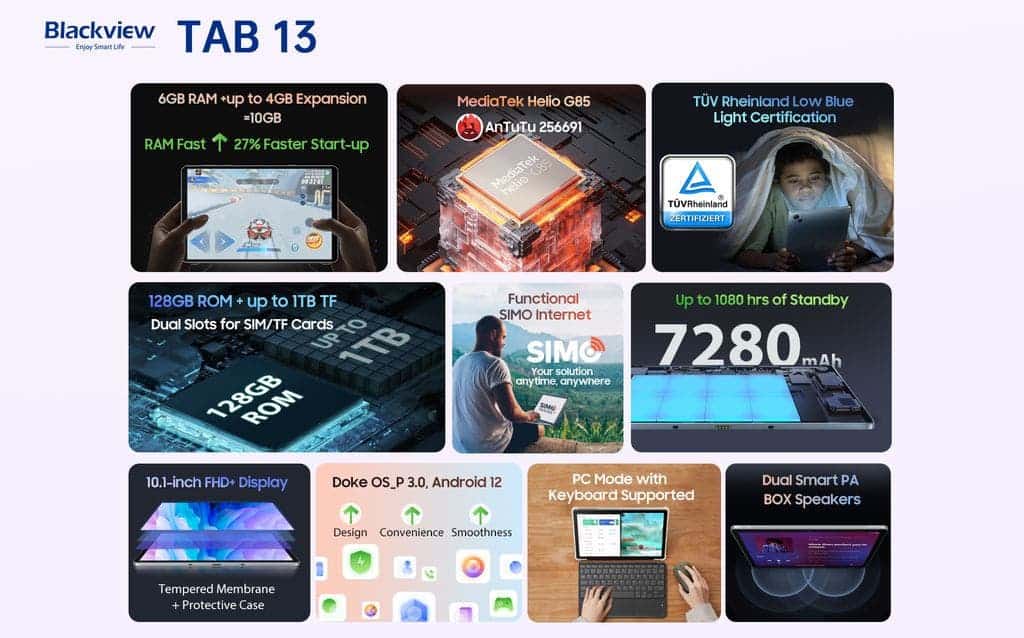 According to some noted tipsters, who shared on Twitter the possible specification of Blackview Tab 13, it is likely that the slate will bear a 10.1-inch FHD+ screen panel. Which they claim to be the first-ever TÜV Rheinland Low Blue Light Certified display among all Blackview devices. Working in conjunction with 3 well-customized screen modes, namely Dark mode, Reading mode and Eye-protection mode, Blackview Tab 13 can protect its users against the harm from low blue light. And reduce eyestrain in an effective way. 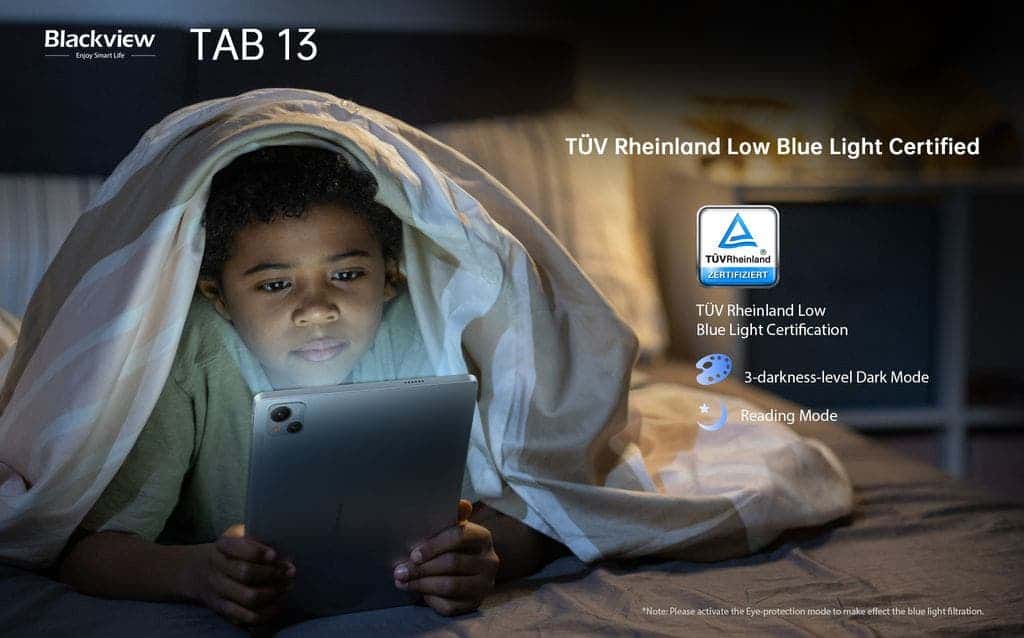 Blackview Tab 13 is said to house a humongous 7280mAh battery, the largest one among all its tablet siblings. Allowing more than 30 hours of use between charges for moderate users. Hence daily gaming, taking loads of pictures, streaming videos or using navigation from day till night seems unlikely to deplete the battery before next charge. 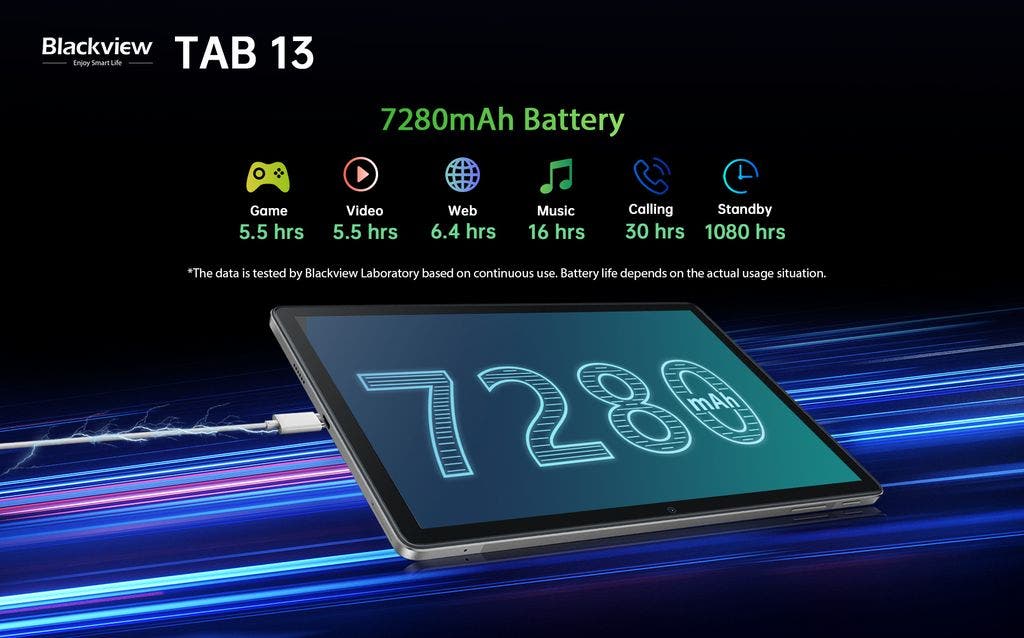 As for the memory, Tab 13 is expected to offer 128GB ROM and up to 1TB expandable support. Plus, the slate is said to be backed by Memory Expansion Technology to expand its 6GB RAM further to 10GB. That means not only the capacity of  Blackview Tab 13 to store more digital content will be upgraded, but also the ability for more fluent multitasking will be greatly improved. 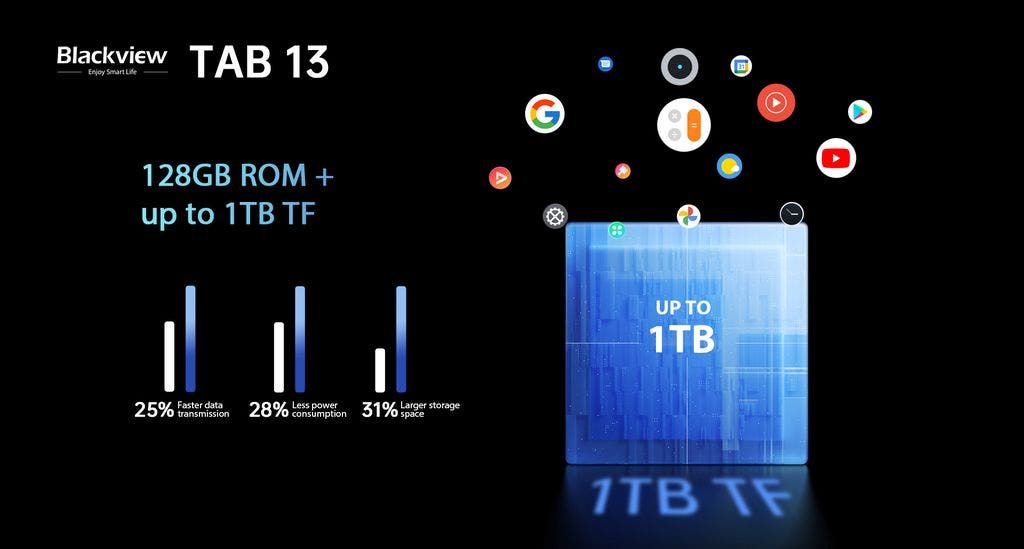 Another possible feature on Blackview Tab 13 will be the Simo Internet. Powered by SIMO, a company that offers smart device users uninterrupted fast mobile Internet access anywhere, anytime by automatically switching to the best available local network among multiple operators. This marks the initial cooperation between SIMO and Blackview. With Simo Internet, Blackview Tab 13 users have no need to purchase a SIM card to access the Internet. When there is no Wifi connection, they can go wireless literally anywhere. It is said, that Tab 13 will carry the SIMO 1.0 which is only available in certain areas. But the company is working to upgrade its future tablet with SIMO 2.0 for more availability of the service in more regions. 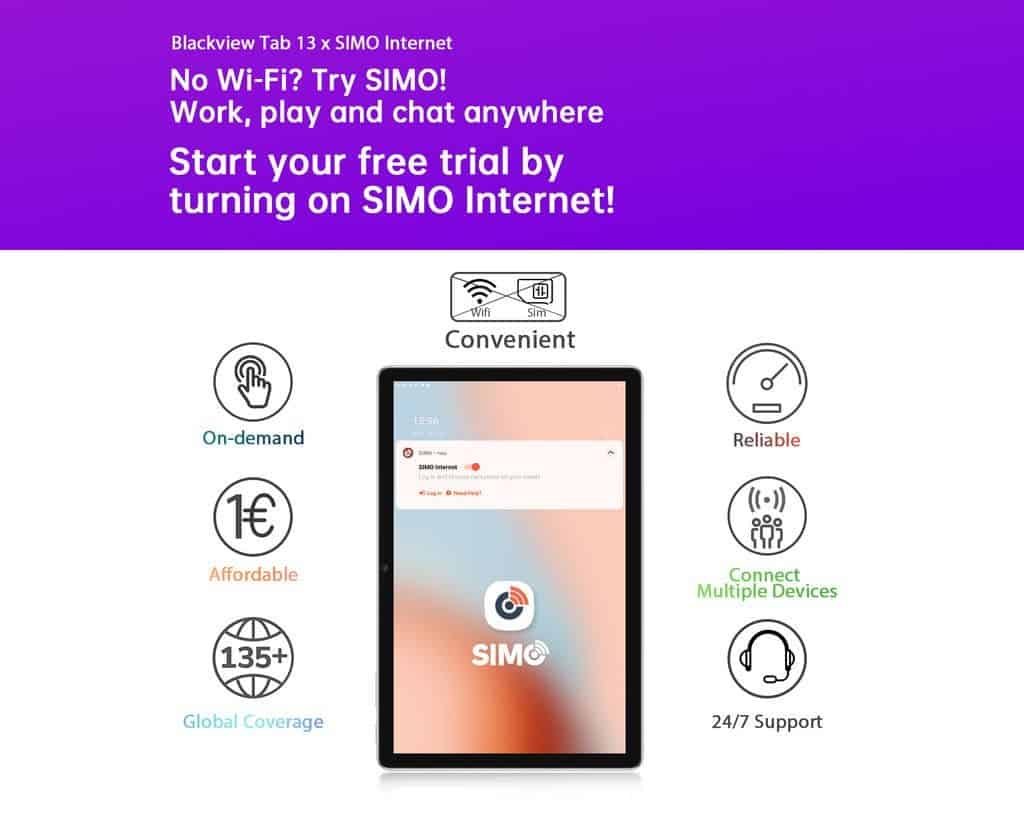 According to an OS designer from Blackview, Tab 13 is likely to provide the new PC-style interaction. It should come with the use of PC Mode, that allows users to open multiple app windows at the same time.While not sacrificing the convenience of screen-touching capability. Hence, scenarios like online conferencing or online classes will be significantly improved in productivity. 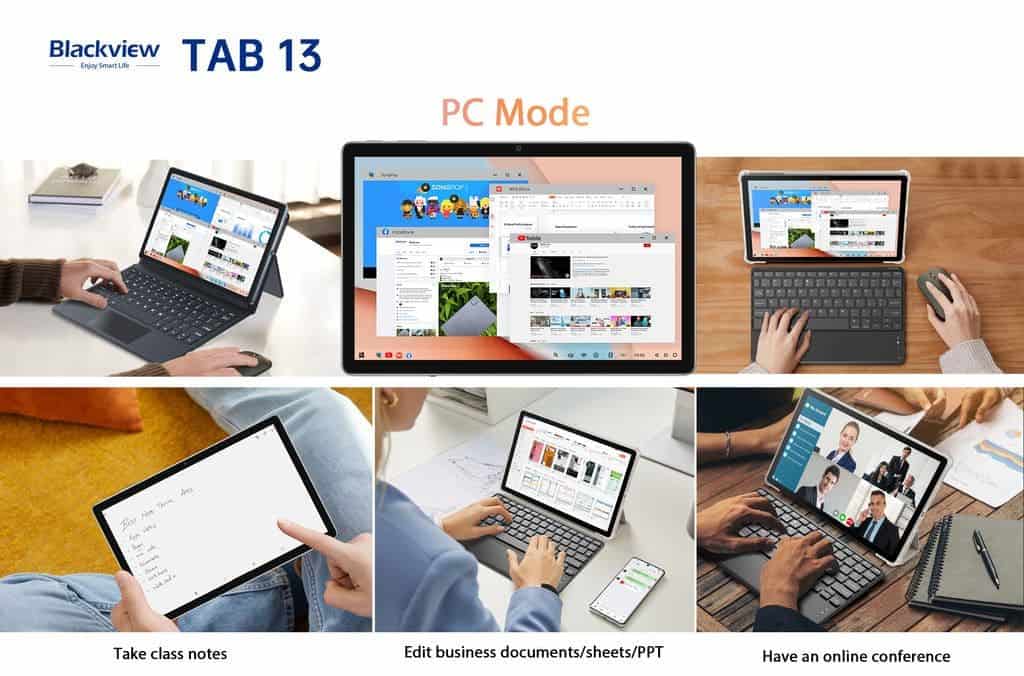 With the latest upgrades to DokeOS_P 3.0 from 2.0 and Android 12, Tab 13 will probably witness better UI fluency and more responsiveness in all gesture operation. Eventually  more secure and customized privacy control thanks to the Android 12. 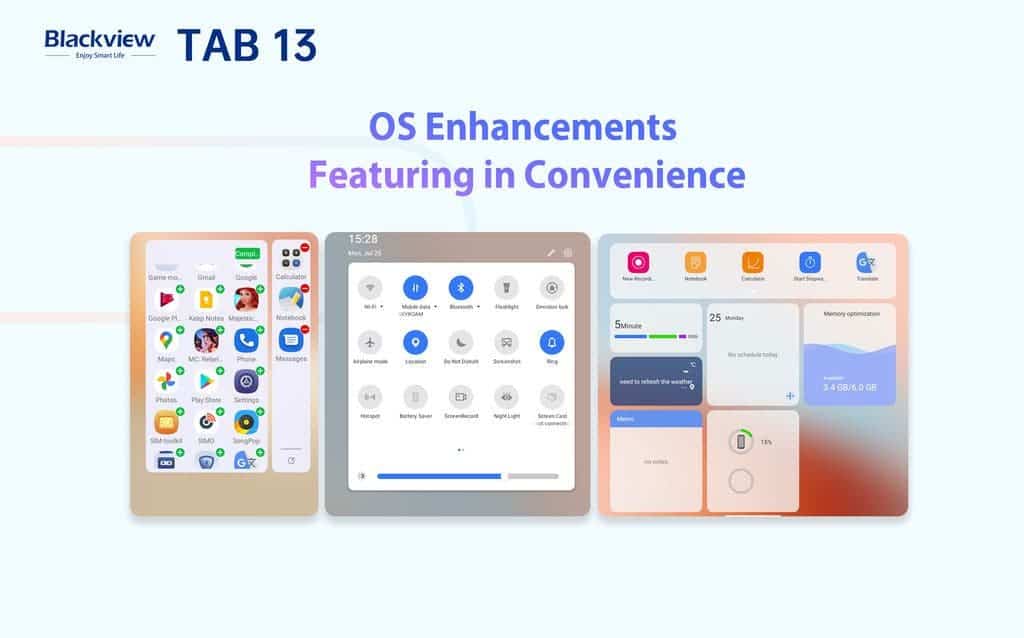 An engineer from Blackview also leaked, that Tab 13 is likely to be way ahead of all its elder siblings when it comes to audio quality. Since the slate is said to carry dual Smart PA-supported Box speakers, offering louder, crystal clear, stereo and exceptional surround sound effects. That will probably rock everyone’s world. In music-listening, films-watching or media-streaming, how Tab 13 will perform with its powerful speakers is indeed worth expecting. 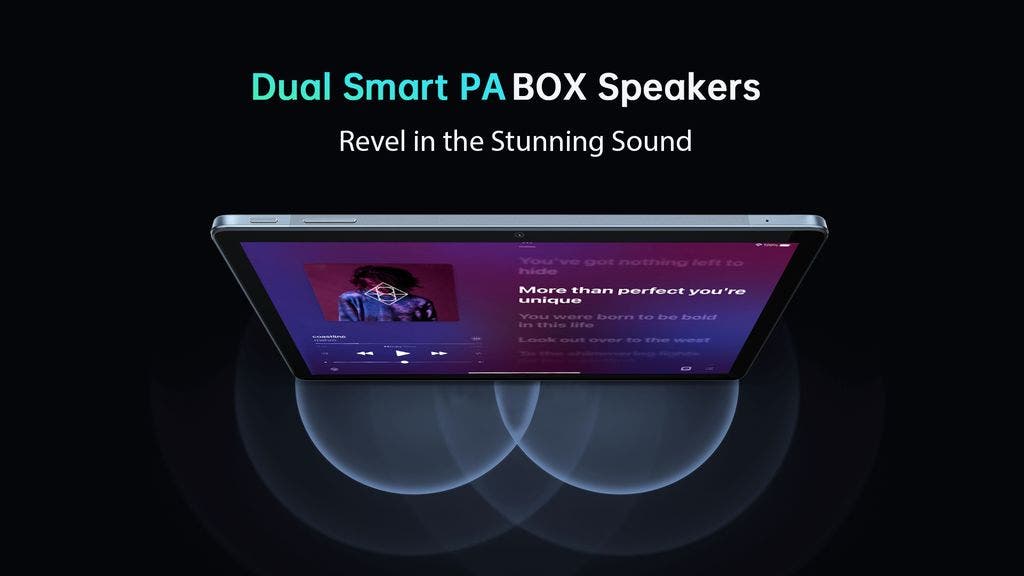 Blackview Tab 13 is likely to be powered by MediaTek Helio G85 and shipped with dual Smart PA-supported Box speakers. For optics, Tab 13 is expected to house 8MP Samsung® front camera and up to 13MP + 0.3MP rear cameras. With regard to the external design, Blackview Tab 13 can be billed as the most gorgeous and minimalist combination among all Blackview slates. Coming with aluminum alloy back panel and flattened frame. And with only 7.7mm ultra-slim and 450g , maxing portability to the fullest. What’s more, the screen of Tab 13 will be protected by a reinforced tempered film for better crack-resistance. With so much to offer, it is no wonder that the company applauds Tab 13 by saying it is the combination of four upgrades——boost in speed, upgrade in design, further eye protection and up-a-notch recreation.

Among all the great advantages of Blackview Tab 13, what surprises us most is surely its lower-than-average price point. Which should be a the record low. But as for the authenticity of this, we will have to wait to know until August 22nd, the expected world premiere day. Stay tuned for more information.