The iPhone 14 series was officially released a few days ago. However, the first batch of buyers are now beginning to receive their pre-orders. As more models roll out, there are more reports regarding the capacity of these devices. Earlier, there was a report that the iPhone 14 Pro and Pro Max have a camera issue. According to the report, when using third-party applications such as Snapchat, Instagram, TikTok and others, the main camera constantly vibrates. Apple later issued a statement that it would roll out a software update to address the issue. However, according to camera app developer Halide, the underlying problem could have links to its hardware. 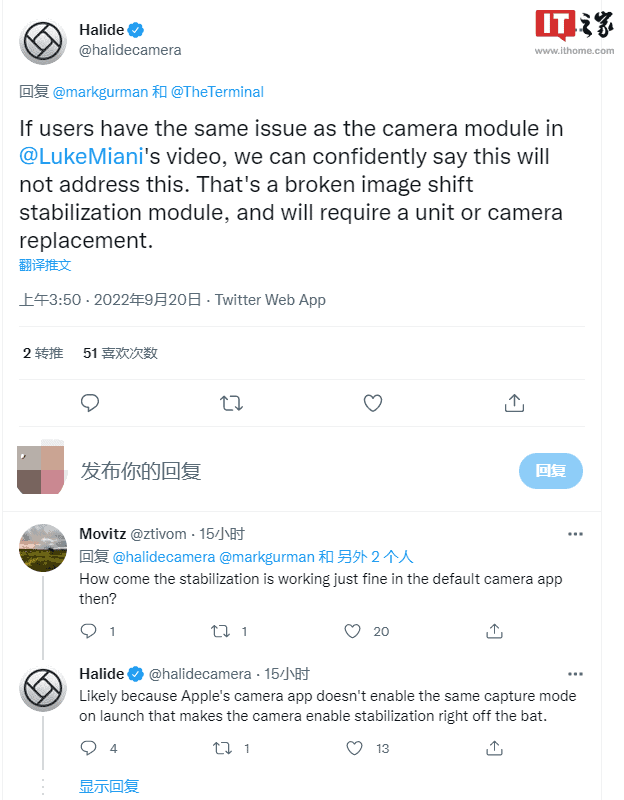 Bloomberg’s Mark Gurman mentions that Apple is preparing to release a fix to address the glitch. In its reply, Halide, a developer of professional camera apps for iPhone and iPad, claims that the broken image-shift stabilization module is the cause of the problem. Halide responds after watching a YouTube video by Luke Miani who also experienced the same vibration issues as several others when using third-party apps.

The iPhone 14 Pro series camera begins to vibrate irregularly when using third-party applications to capture images and videos. Interestingly, the problem didn’t arise when using the iPhone’s default camera app. Some Twitter users began to question Halide. The developer responds that the issue does not occur with these smartphones when running the default camera app. This is because the app does not launch with the same shooting mode, allowing stabilization to kick in.

There may be some truth in what Halide said, but Apple and its software engineers may have reproduced the problem and believe the glitch is software related. Even if the stabilization module eventually fails, Apple may replace the module unit for the iPhone 14 Pro and iPhone 14 Pro Max affected by this vibration issue.

Next Elon Musk to testify in Twitter lawsuit next week