Google will hold a new product launch conference on October 6 where it will launch the Google Pixel 7 series. This series will have two models including the Google Pixel 7 and Google Pixel 7 Pro. The company will also release a variety of new accessories. As the launch date approaches, there are more revelations about Google’s Pixel 7 / Pro series. Today, a source brings the latest revelations. According to @Roland Quandt, Google Pixel 7 Pro pre-orders will come with Google’s first smartwatch, the Pixel Watch. He stressed that this strategy may only work in certain countries, with a particular emphasis on the UK. The Pixel 7 series will go on sale on October 18 while the Pixel Watch will hit shelves on November 4. 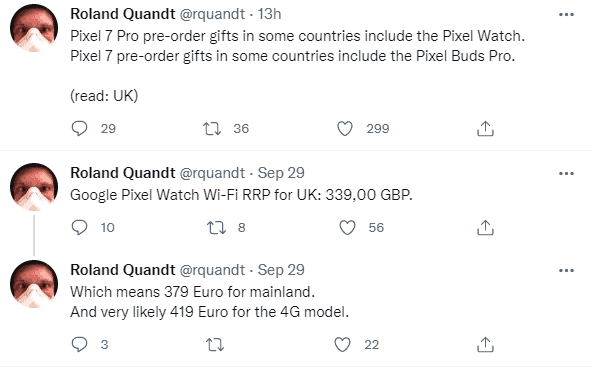 From available information, the appearance of Google Pixel 7 and 7 Pro basically continues the design of the Pixel 6 series. However, the Pixel 7 series will come with the second-generation Tensor chip. This device may bring the face unlock function that users expect.

The Google Pixel Watch features a round design with a solid crown. It will have light green, black, and light purple straps as well as silver, brass, and black bodies. At the same time, the Pixel Watch adopts a quick-release design. Users can rotate the Pixel Watch to complete the disassembly and assembly of the strap. This device will also integrate the Fitbit function, and run WearOS 3.

There are rumours that the Google Pixel Watch can be used for a day on a single charge. Speculations on the price reveal that the starting price of the Pixel Watch will be $349 in the United States. However, the cellular version will start at $399. As for the Pixel 7, its starting price will be $599 while the Google Pixel 7 Pro will start at $899. This shows that there is no change in price relative to the previous generation and is relatively reasonable. In addition, @Quandt also reveals that Google Pixel 7 pre-order bonuses. He said that it will be launched with the Pixel Buds Pro, which is priced at $199 in the United States.

OnePlus To Use Google’s Technology In OnePlus Buds Pro 2