AnTuTu has today published the list of the most powerful Android smartphones for September in China. The Dimensity 9000+ SoC outperformed all Snapdragon processors and topped the ranking.

So, according to the list, the Asus ROG6 running the MediaTek Dimensity 9000+ outperformed 9 Snapdragon 8+ Gen 1 flagships with an average running score of 1,123,036.

According to reports, the ROG6 not only has a high running score, but it also does a very good job in heat dissipation thanks to the exclusive cooling fan. The body’s heat dissipation design with a sunroof is the first one in the industry. Users like ROG’s daring design and the Dimensity 9000+’s unprecedented achievements.

The top ten in the performance list are all Snapdragon 8+ flagships, with the exception of the ROG6, the Dimensity 9000+ flagship. 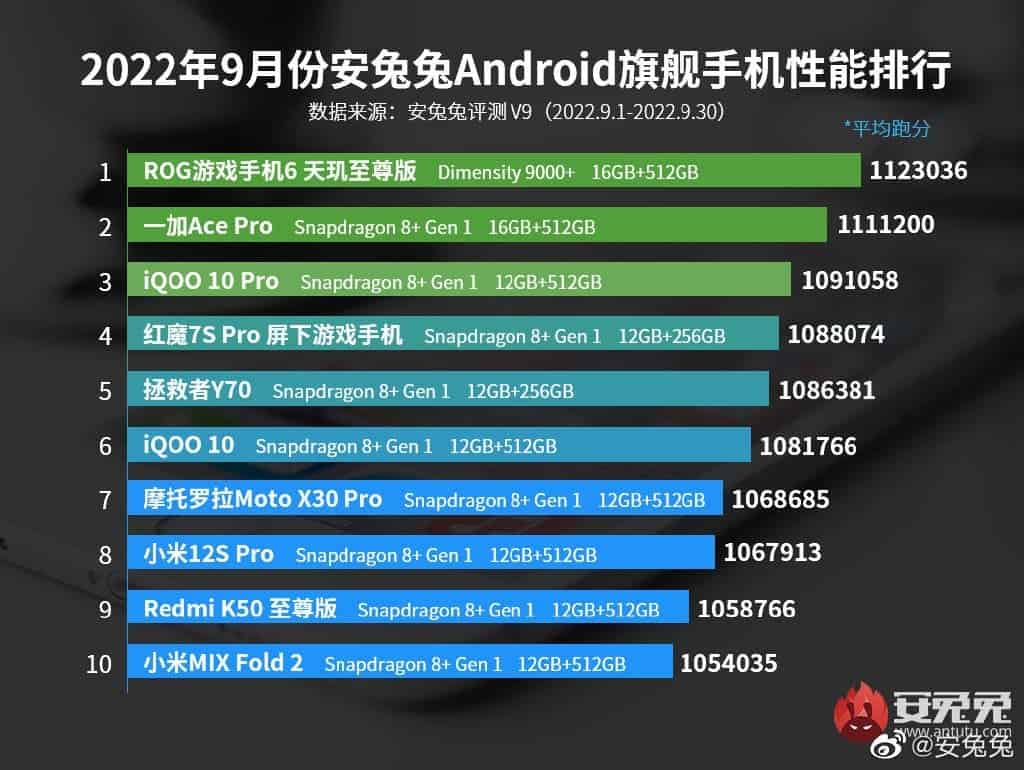 Also, the MediaTek Dimensity 9000 processor is a premium SoC with a built-in 5G modem. It has one quick Cortex-X2 core running at up to 3 GHz. Three additional A710 cores running at up to 2.85 GHz. And four Cortex-A510 power-saving cores running at up to 1.8 GHz. At TSMC, the SoC is using the brand-new 4nm technology. Together, all CPU cores may use 6 MB of System Level Cache and 8 MB of Level 3 Cache (SLC).

In addition, LPDDR5X with 7500 Mbps is supported by the inbuilt quad-channel memory controller. An ARM Mali-G710 MC10 serves as the integrated GPU (10 of the 16 possible cores). The Dimensity 9000 is one of the first chips manufactured by TSMC using the new advanced 4nm technology.

Next Pixel 7, Pixel 7 Pro complete specifications pops up on the internet

OnePlus Pad Launched: Not And iPad, But A Good Option

AnTuTu: 12 GB of RAM and 512 GB memory are becoming popular