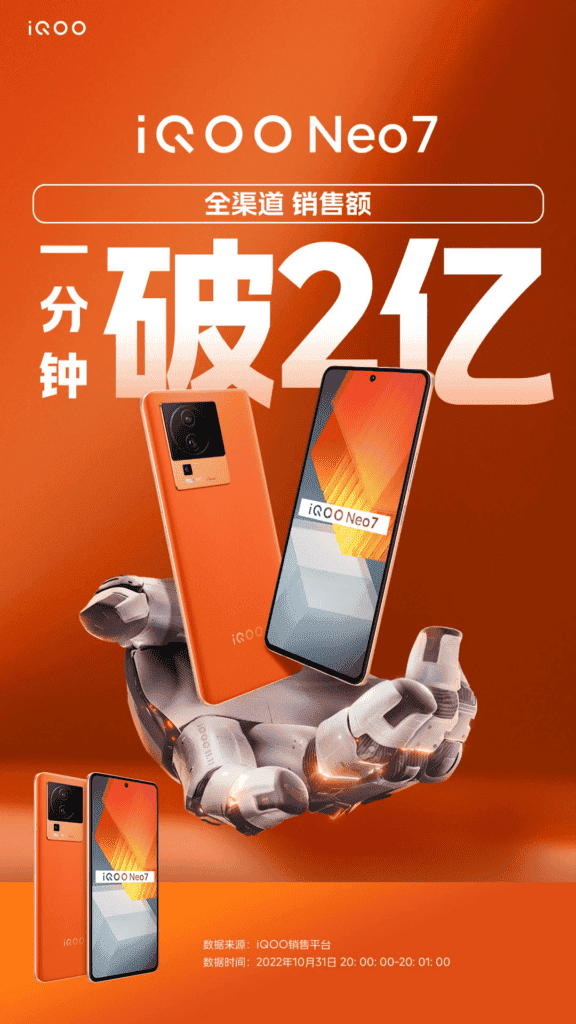 Apparently, the company sold around 55,570 to 74,100 units of the iQOO Neo 7 in its first sale. Apart from Vivo’s China website, the phone is also up for grabs via JD.com. Vivo’s iQOO numbers for this particular device are very stable so far. And apparently, the company is already preparing a new SE variant. The current iQOO Neo 7 variant is available in Geometric Black, Impression Blue, and Pop Orange.

The iQOO Neo 7 flaunts a 6.78-inch Samsung E5 AMOLED screen with Full HD+ resolution. It also has a 120 Hz refresh rate and an under-screen fingerprint scanner. Under the hood, the phone packs the MediaTek Dimensity 9000+ SoC. The phone also has up to 12 GB of LPDDR5 RAM. It draws power from a 5,000 mAh battery with 120 W fast-charging support. In terms of software, the phone runs on Android 13 OS with a layer of OriginOS Ocean UI running atop.

The iQOO Neo 7 has a centered punch-hole with a 16 MP shooter. Moving around to the back, the device supports with 50 MP Sony IMX766V snapper with OIS. There is also an 8 MP ultrawide snapper, and a 2 MP macro camera.

For now, there is no word from iQOO regarding to the global release. But we know that the company will eventually bring the phone to other markets. Meanwhile, it is also preparing for the launch of the iQOO 11 series.

Previous Realme 10 series will hit the market on November 9