A few weeks back, Tecno held a webinar along with Counterpoint and Forbes experts, to tease its “push into flagship segment”. During the webinar, the company teased the launch of its new Dimensity 9000 flagship phone. Now, the company is taking wraps off the device, and in fact, we have two flagships rather than one! The Tecno Phantom X2 and Tecno Phantom X2 Pro are definitely glorious entries into the flagship segment. Besides the high-end 4nm SoC, the Pro variant also brings the first retractable portrait camera. 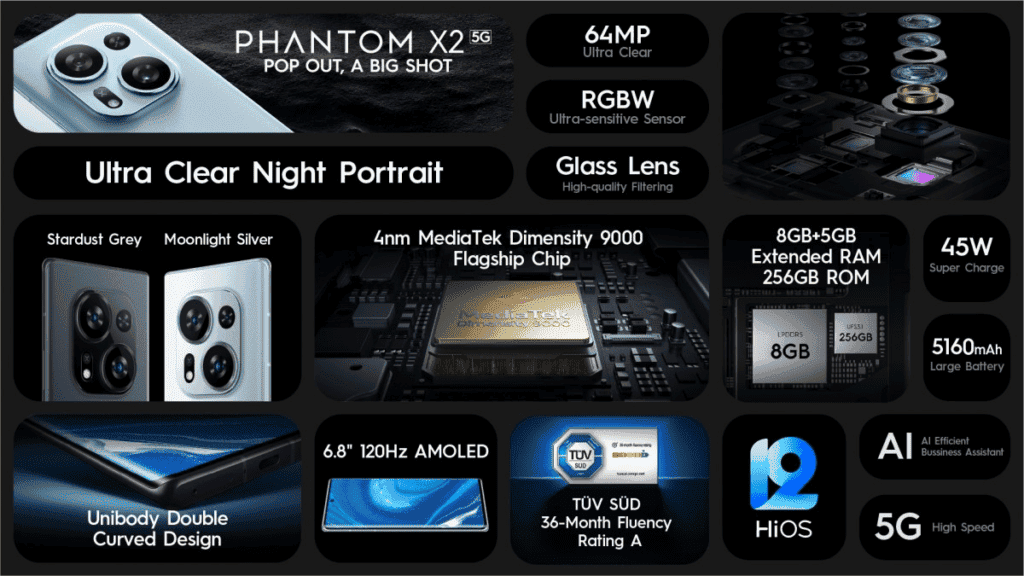 Both flagships come with the excellent Dimensity 9000 SoC. This SoC didn’t have much luck in terms of availability. But when it comes to performance, it’s everything you can expect from a flagship CPU. It brings Cortex-X2, A710, and A510 cores, and a powerful Mali-G710 MC10 GPU. It’s a massive jump in comparison to the original Phantom X. That’s not the only advancement, the two devices also bring the LPDDR5X RAM standard. The vanilla has 8 GB of RAM, whereas the Tecno Phantom X2 Pro packs 12 GB of RAM. Both phones have up to 256 GB of UFS 3.1 storage. 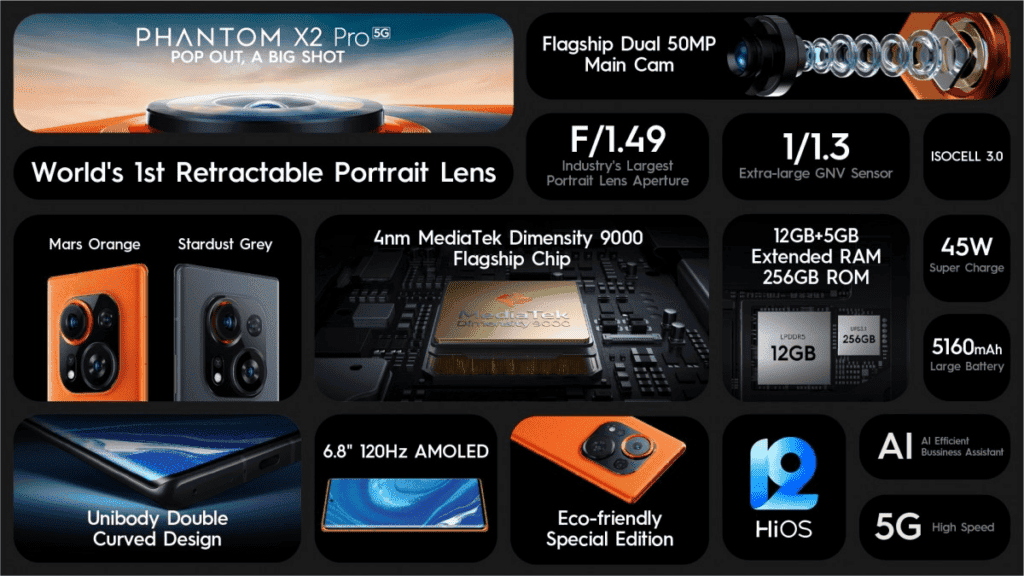 The Tecno Phantom X2 and X3 Pro bring 6.8-inch AMOLED panels with Full HD+ resolution and a 120 Hz refresh rate. The devices’ have Gorilla Glass Victus, which is also a premium thing. In terms of design, both devices have curved displays with a centered punch-hole cutout. Both phones have 5,160mAh batteries with 45W fast charging. That may not be overwhelming as certain phones, but it’s more than what Samsung will offer with its Galaxy S23 series.

The camera system certainly is one of the main appeals of these phones. It’s the biggest way to put the vanilla and the Tecno Phantom X2 Pro apart. First of all, the design of the cameras is something new. They have a massive island to comprise the cameras, we have the usual square-ish island that tends to sit at the top-left of the back. However, in these phones, the island has been moved to the center. The Pro model has a decorative ring around the retractable portrait lens.

How the retractable portrait camera works. It has an f/1.5 aperture and lets more light reach the 50 MP ISOCELL JN1 camera. The shallower depth of field creates a natural bokeh effect, helping users to get the perfect portrait effect on shots. The camera has a 65 mm lens and which means it can also be used as a telephoto lens for 2.5x zoom. For that reason, it’s called a “retractable” lens. This works to keep the phone thin. The mechanism extends the lens outward when in use and retracts it afterward. The Tecno Phantom X2 Pro also has a 50 MP main camera, and a 13 MP ultrawide shooter that has auto-focus and can work as a macro camera. The main camera also uses an RGBW sensor that captures 60% more light. Worth noting that it also has Optical Image Stabilization. 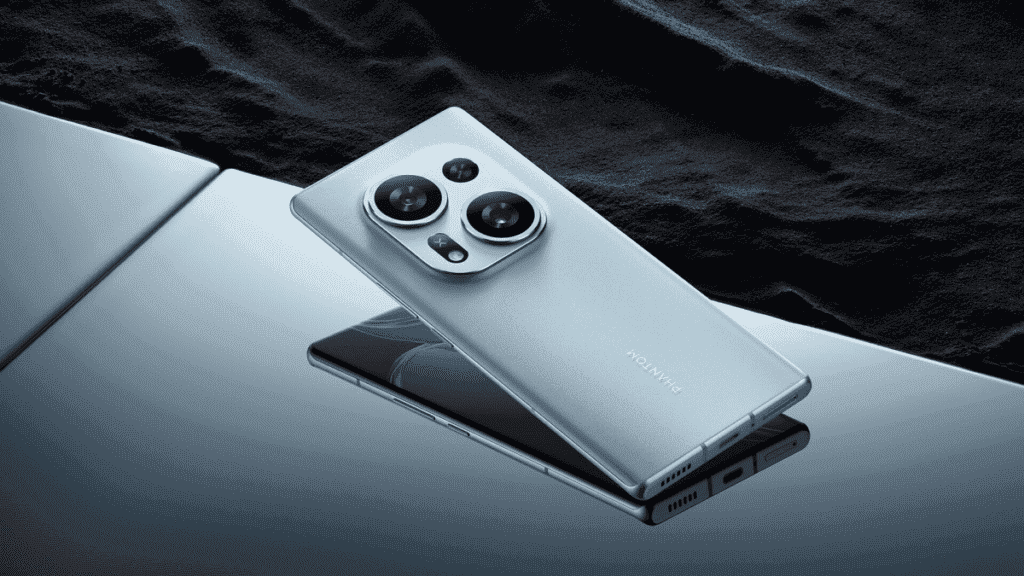 The standard Tecno Phantom X2 has the same 12 MP ultrawide/macro camera. The last sensor is a simple 2 MP depth module, and the portrait lens is absent. Last but not least, both phones have 32 MP selfie cameras at the punch-hole.

The Tecno Phantom X2 Pro features an exclusive Mars Orange color which uses recycled plastics at the back. There is also a Stardust Grey. The vanilla, meanwhile, gets the Stardust Grey and a Moonlight Silver colorway.

Leica? ZEISS? Tecno is looking for partners in camera tech