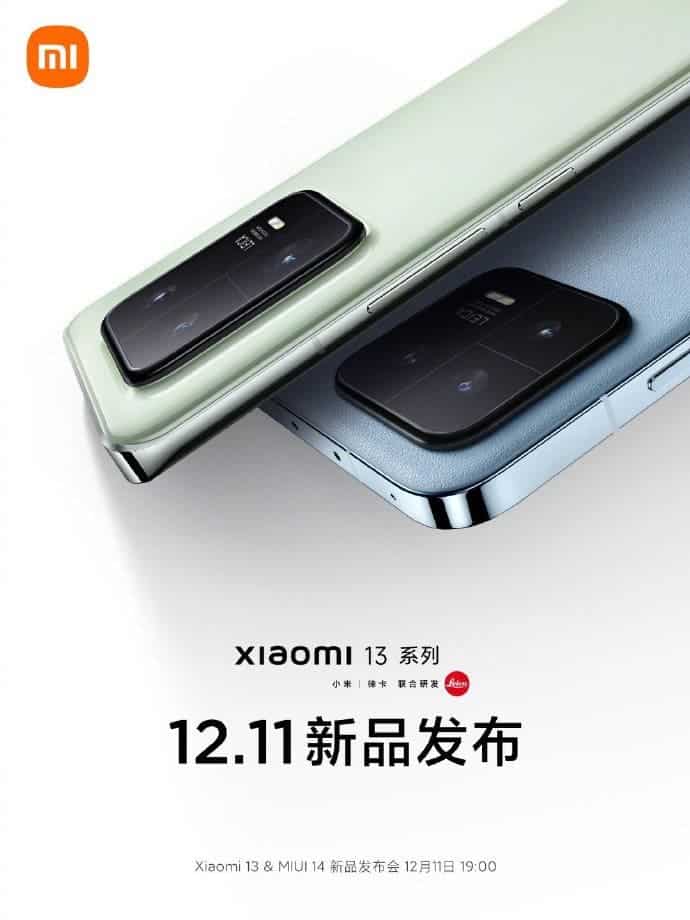 In the most recent release of teasers from Xiaomi, the company confirms that the Xiaomi 13 series will support stereo dual speakers and also Dolby Atmos. Xiaomi’s CEO, Lei Jun also had some words to say regarding this feature. He said

“The loudspeaker effect is very good. When listening to music, watching movies and playing games, I have a very good experience.”

According to the official warm-up, the front of Xiaomi 13 is slightly 2.5D. In addition, the back is four-curved, with a width of 71.5mm. The company claims that this design makes the mobile phone comfortable to hold. This series will also come with a 4642mm² super large VC liquid cooling. In addition, the entire Xiaomi 13 series supports the IP68 standard, which is also the highest level of dustproof and waterproof standards. In terms of hardware, the Xiaomi 13 series will come with Qualcomm’s latest chip, the Snapdragon 8 Gen 2 SoC. This chip supports LPDDR5X memory and UFS 4.0 flash memory. In terms of imaging, the entire Xiaomi 13 series will use a Leica 75mm humanistic telephoto lens with an f/2.0 super large aperture. Also, this flagship series will adopt a nano-skin technology and has versions such as mountain blue, white and wild green colour options.

According to Lei Jun, founder and CEO of Xiaomi, the performance of this flagship during gaming is solid. He claims that when playing Genshin Impact, a demanding free-to-play action role-playing game, the image quality of the game runs at full frame. Also, the temperature of the device remains at 43°C and the brightness does not decrease during the whole process. Looking at Genshin Impact’s graphic demand, this performance is simply amazing. According to data from Lei Jun, in terms of GPU performance and power consumption tests, the peak performance of the GPU of the Snapdragon 8 Gen 2 far exceeds that of the Bionic A16. He claims that the SD8 Gen2 GPU is leading by as much as 25%. “Under such top performance, the Snapdragon 8 Gen 2’s excellent energy efficiency performance makes the power consumption of the motherboard only 8.0W. This is almost the same as that of the Bionic A16”. The massive heat sink covers almost half of the interior of this device. It is very efficient in heat dissipation. “The distant mountains are stacked with shadows and blue sky, and a touch of Qingdai is in the hand”.

His words above are basically describing the blue colour and the somewhat leather feel. He further reveals that this mobile phone uses a nano-skin tech which is resistant to wear as well as dirt. This means that users do not have to worry about the device losing colour or attracting dirt. This not only makes it look good but also feels good.

In addition to the blue option, Lei Jun also announced the white colour option. He says, “the white version is also good.”

This device is currently on reservation and the Jingdong link reveals that the standard version has over 220,000 reservations. The Xiaomi 13 Pro also reservations also exceed 200,000. The Xiaomi 13 is a small screen mobile phone with a 6.2-inch display that has thin bezels. The left, right and upper bezels are only 1.61 mm wide. The chin which is the widest part is only 1.81 mm. The iPhone 14 and 14 Pro has bezels that are 2.4 mm and 2.15 mm wide respectively. This new flagship from Xiaomi will bring a very strong visual impact. Also, the single punch-hole design of the Xiaomi 13 will make the screen visual effect far better than that of the iPhone 14. We can say that this device comes with an all round “upgrade”.