Earlier today, Twitter leakster, SnoopTech shared an image of the Motorola Moto E13. This is one of the few appearances of this device which reveals the front and rear of the device. The Moto E13 is expected to officially launch in the first quarter of 2023. From the image, the Moto E13 will have a deep green or dark green colour option. There are also reports that this device may be the cheapest mobile phone in the Moto E series. 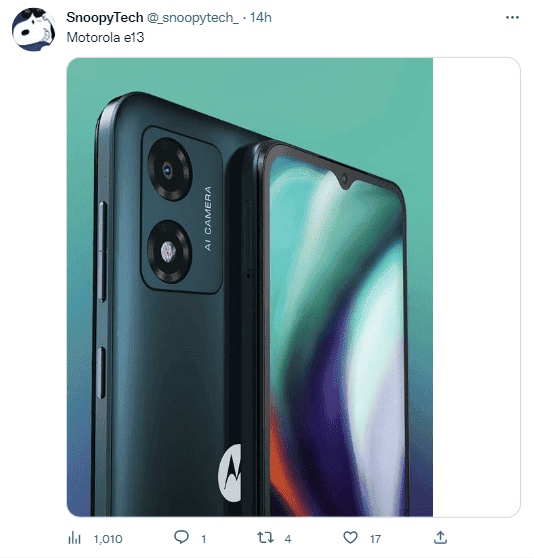 The render also reveals that this device will come with a waterdrop display. The opening on the top of the display will host a single front camera. The screen design is obviously flat. While the power and volume buttons are on the right side of the fuselage, there is a SIM card tray on the left side. Also, there is a rectangular camera unit on the back of the fuselage with the words “AI Camera” on it. It is important to note that the rear appears to have a dual camera setup. However, this device actually comes with a single rear camera. The other rear opening which looks like a camera sensor is actually the LED flash disguised as a camera.

The Moto E13 recently appeared on the Geekbench benchmark website. The phone uses a Unisoc T606 chip and 2GB of RAM. This device is expected to come with the super light Android Go system. To understand the performance, the Unisoc T606 on this device scored just 318 points in the single-core tests, and 995 in the multi-core department. Going for technical details, the Unisoc T606 uses an old 12nm manufacturing process. The chipset has 2 x ARM Cortex-A75 cores clocked at up to 1.6 GHz and 6 x ARM Cortex-A55 cores clocked at up to 1.6 GHz. It has a modest Mali-G57 MP1 for graphical tasks. It is enough to handle some casual games and not much besides it. If performance disappoints, we’re glad to see that Android 13 will be available on the Moto E13 straight out of the box.

Read Also:  Leaked: The Moto G13 Will Have Similar Specs to the G23
Source/VIA :
SnoopTech